Information
Enhanced care: A specialist hospital ward for people who have dementia
Dementia together magazine: Oct/Nov 18

A Southampton hospital is giving patients with dementia a better chance of returning to their own homes. 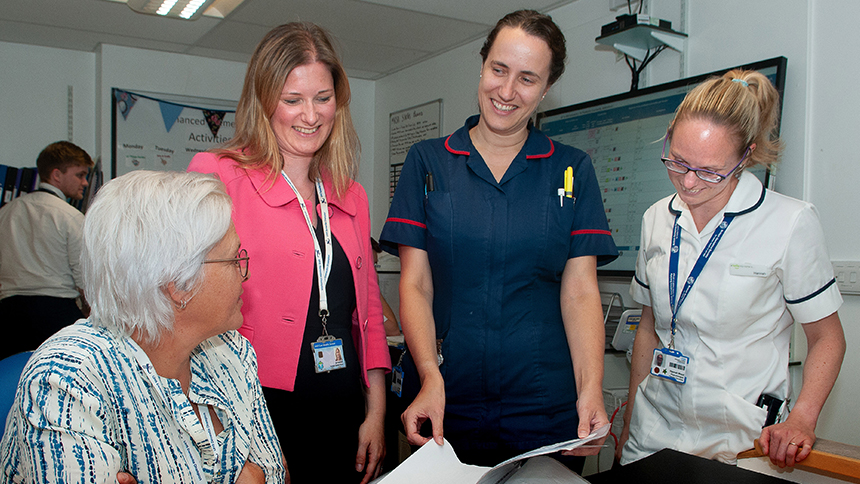 G7 is an enhanced dementia care ward that’s smaller and calmer than a typical ward. This allows patients who have dementia or delirium to receive treatment somewhere that feels more relaxed and less clinical.

Preparing for a hospital stay when a person has dementia

There are various points to consider when a person with dementia is preparing to go into hospital. This may include making longer-term plans for the future.

Patients are free to walk around and can enjoy stimulating activities such as arts and music.

‘The environment enables them to feel less confused and more at home,’ says Jeni Bell, a Clinical Specialist Admiral Nurse.

There is one staff member for every three patients, a higher than usual ratio.

‘Nurses on other wards don’t have the time to unpick what’s going on,' says Lucy.

‘In an acute ward you can’t really switch your approach from patient to patient, but here you can spend quality time with them,’ says Luca Frosini, a Staff Nurse.

As Lucy Ward, G7’s Manager, puts it, ‘Nurses on other wards don’t have the time to unpick what’s going on, whereas we do.’

Psychiatrist Vicki Osman-Hicks is the Older Person’s Mental Health Consultant for G7. She says it’s unusual for a hospital to offer mental health and geriatric care in this way within the same unit.

‘Typically a psychiatrist is outsourced and comes in, but I’m here on the ward to support the team,’ she says.

‘On another ward a patient won’t wash or take tablets, but within even a day here they’re more willing, more engaged,’ says Joe.

There has been a great improvement in the health and wellbeing of many people.

‘Some were biting and hitting people on other wards, but they come here and a fog lifts,’ says Lucy.

The impact can be almost immediate.

‘On another ward a patient won’t wash or take tablets, but within even a day here they’re more willing, more engaged,’ says student nurse Joe Eddy.

Staff get to know patients by using This is me, a simple form from Alzheimer’s Society that details a person’s preferences and background.

‘I live my life by it – it’s the best thing’, says Kirsty Baker, a Health Care Assistant. ‘If a patient is upset, I can talk about the topics and build up trust.’

This is me is a simple form for anyone receiving professional care who is living with dementia or is experiencing delirium or other communication difficulties.

Get This is me
Information

G7 staff, many of whom are Dementia Friends Champions, are always looking for ways to help patients feel comfortable on the ward.

‘One man was used to having a drink in front of the TV, so his family bought in non-alcoholic beer to make it more like home,’ says Becca Darbon, a Therapy Tech. ‘We tried to replicate it as much as we could.’

‘A patient’s son said it was the first time that people had actually heard what they had to say and helped them,’ says Jeni.

Families appreciate the opportunity to be involved in their relative’s care and discharge.

‘A patient’s son said it was the first time that people had actually heard what they had to say and helped them,’ says Jeni.

‘Families have to make life-changing decisions under pressure, but if they feel supported then they feel stronger to make a decision that’s right.’ 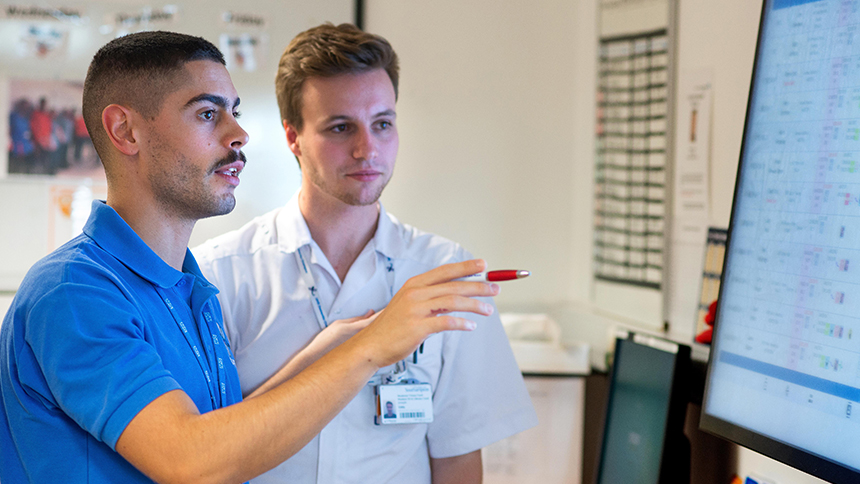 G7 is staffed by those who have put themselves forward for the role, such as Stephen Dore, a Senior Healthcare Assistant.

‘My mum had vascular dementia and passed away in a different hospital, rather than at home where she wanted to be, because they faffed around too much,’ he says.

‘I felt the need to join G7 partly because of her bad experience.’

‘I used to be scared of people with dementia but now that I’ve heard their stories and seen what they have to offer,' says Mel.

Mel Smith, a Sister on G7, asked to move there after hearing of its great work.

‘I used to be scared of people with dementia but now that I’ve heard their stories and seen what they have to offer me, I wouldn’t work with anyone else,’ she says.

Vicki says the ward has helped reduce the length of time patients spend in hospital.

‘We’re able to optimise care and recovery so that many patients can return home, which is so important,’ she says. ‘We didn’t want the ward to always be a step to institutional care.’

Some patients do have to move into care, which is why G7 continues to build relationships with local homes so they can best decide which are the most suitable.

Rox Carare is full of praise for G7 after her father was admitted there in March.

Octavian, who has Alzheimer’s, entered the ward after a fall at home, which also had a great impact on his 88-year old wife.

‘G7 was extraordinary, as they not only cared for my father and his medical needs but also engaged my mother in his care and allowed my parents to be together constantly,’ says Rox, a dementia researcher.

‘My father benefitted from the highest calibre of medical care and the rest of us were warmly treated,’ says Rox.

Rox’s mother was able to stay at the hospital overnight when daily trips became too tiring, while Rox herself was grateful to the ward staff, who took her calls at 4am while she was working abroad.

‘My father benefitted from the highest calibre of medical care and the rest of us were warmly treated,’ she says.

‘That’s a unique feature of a busy NHS ward, but also key to the successful care of patients.’

Hospitals
Back to top