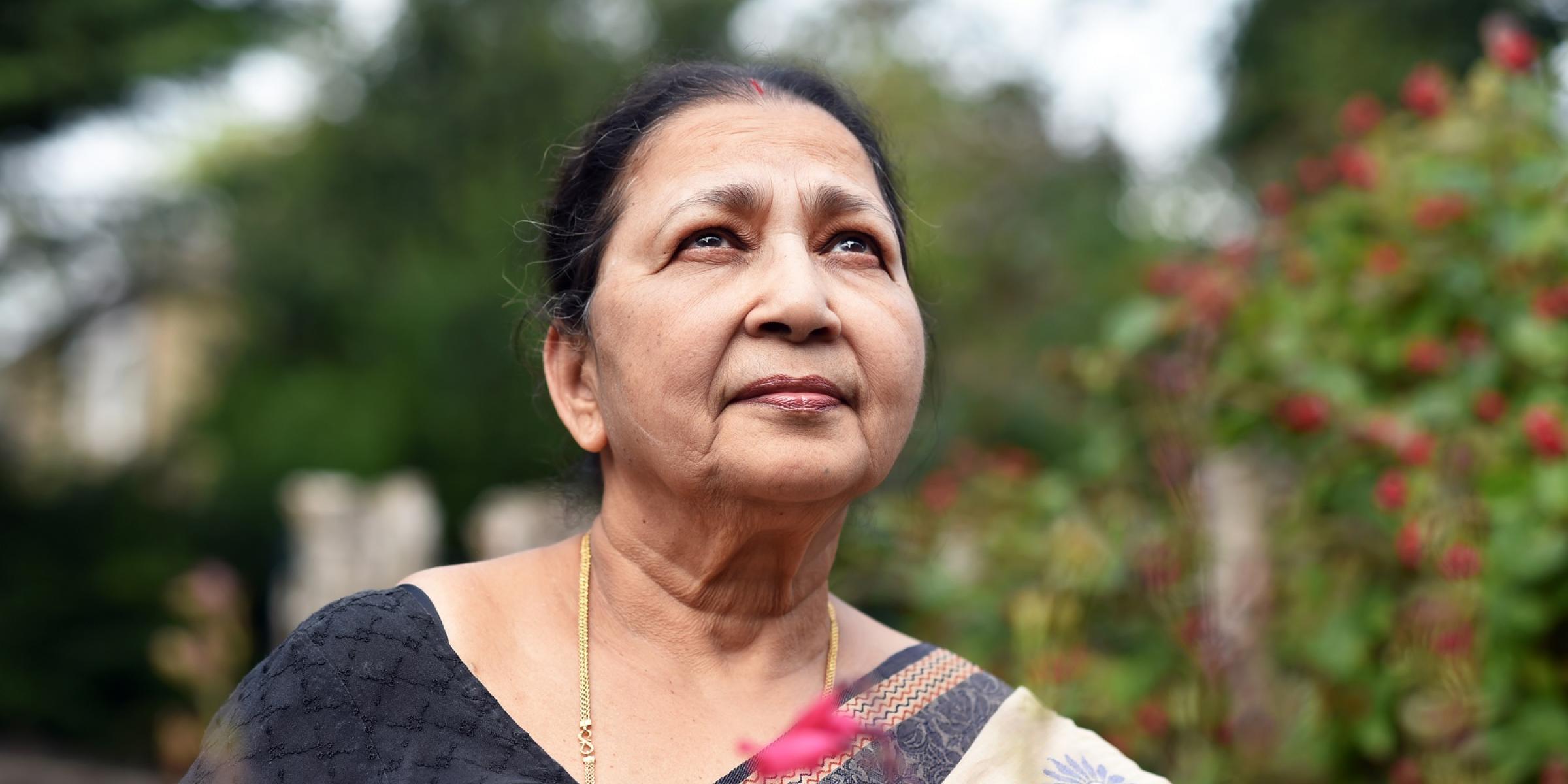 Anima Bhuiya is doing her best to cope as her husband’s dementia progresses. They have been married for over 50 years, and Sudhir now has both Parkinson's disease and Alzheimer's.

Anima Bhuiya is finding it increasingly challenging to care for Sudhir, her husband of over 50 years, who has Parkinson’s disease and Alzheimer’s.

Anima, who lives in Leeds, finds some comfort in sharing stories and support with other local carers. However, away from this occasional respite, she continues to have deep concerns about what the future may hold.

Telling people about your dementia diagnosis

Dementia will affect many areas of your life, including your relationships. However, there are ways to prepare for and adapt to these changes. Talk to people about your diagnosis when you’re ready. Be honest and let them know how you’re feeling.

Anima, who grew up in Kolkata (then Calcutta), came to England after finishing university, working in accounts for the Post Office.

Her marriage to Sudhir in 1965 was an arranged one. They spent only an hour in each other’s company before getting married a few weeks later.

‘Our bond is very strong,’ says Anima. ‘We’ve been married and living together for nearly 55 years, with no grievance against one another.

‘He’s a very gentle person who is also very honest – he never lied or cheated anybody.’

The couple have one daughter and two granddaughters, and many of Anima’s wider family live in India.

‘We used to visit every year, but now my husband can’t because of his illness,’ she says.

‘I went last year on my own for a short time and I still hope to go this year, but I’m not sure – it depends on his condition.’

Sudhir was diagnosed with Parkinson’s disease seven or eight years ago. During a medical appointment a few years back, a specialist concluded that he was also in the early stages of dementia.

‘When I was told he had dementia, I couldn’t believe it because he hadn’t been showing it,’ says Anima.

‘He’d been talking to himself in his sleep, saying things that didn’t make sense, but I just thought it was a habit of his.’

The reality of the situation hit Anima during a flight home from India.

‘We were coming back on the plane and Sudhir didn’t recognise me,’ she says. ‘That’s when I came to know that he really does have dementia.’

Sudhir now has trouble recognising people other than close family or the carers he sees regularly.

He has become less polite and more impatient, sometimes even shouting, which is very out of character. He can also find everyday tasks difficult to comprehend.

‘Sometimes I give him food and he’ll ask me what he should do, whether he should eat it,’ says Anima.

‘He was always a very independent person – he wouldn’t depend on somebody if he could do it himself. But now he’s totally dependent on others.’

Sudhir, who is partially blind and uses a hearing aid, also receives support from two homecare providers, which provide different levels of personal care. He needs help with eating, drinking, medication and going to the toilet, and sometimes with standing and walking.

Anima finds it extremely difficult to see her husband in this condition.

‘He’s deteriorating rapidly,’ she says. ‘He’s lost weight, his strength, his mind – he’s lost everything. It’s painful to me.’

Anima faces daily challenges as she does her best to support her husband.

‘The GP has spoken about a nursing home but I don’t want Sudhir to go away from me, not for as long as I can bear it,' says Anima.

‘I was recently up at 6.30am helping the carer to try and get him to sit on the toilet, which he couldn’t do,’ she says.

‘It makes me think about how he and I will cope in the future. I worry every moment.

‘The GP has spoken about a nursing home but I don’t want Sudhir to go away from me, not for as long as I can bear it.’

Dementia Café – information and advice for people in a relaxed setting

Come along to one of our local cafes and have a cup of tea with someone who understands.

A welcome source of support has come from a dementia café run by mental health and wellbeing charity Touchstone.

Hamari Yaadain, which means ‘our memories’ in more than one South Asian language, meets twice monthly in Harehills, Leeds.

The group brings South Asian people with dementia, carers and relatives together for conversation and activities.

Anima previously attended the group with Sudhir, but with his health worsening she now goes on her own. She has got to know other members and they chat, play games and exchange experiences.

‘I’m looking after my husband all the time, so it’s a break from that,’ she says.

‘When you’re mostly staying in one room in your house, it’s important to go and share your difficulties. It might even help you forget them temporarily, otherwise you’re worrying all the time.

‘We share the pain we’re all going through. We talk about everything – everybody is open-minded,' says Anima.

‘Although you can’t forget it, you can at least overlook it for a few hours. It’s an opportunity for the recreation of your mind.’

Anima praises the way the group is run, and says its members offer welcome emotional support.

‘We share the pain we’re all going through,’ she says. ‘We talk about everything – everybody is open-minded.

‘If someone is in difficulty we’ll know about it and support them. You also see that you aren’t the only one who is suffering.’

Anima chooses to be open about both her husband’s condition and the struggles that she faces in caring for him.

‘I think it’s better to share, there’s nothing to hide. You can then talk about it with others,’ she says.

‘I also see no harm in sharing my story publicly – it might help someone else.’

Anima extends this approach to her 13-year old granddaughter, Sanjana, who is fully aware of her grandfather’s health conditions.

‘She knows about Sudhir’s dementia and is very kind to him, very helpful,’ says Anima.

With her husband’s health worsening and the challenges of being a carer growing ever greater, Anima is frank about her situation.

‘There is nothing to look forward to, no improvement to be expected,’ she says. ‘Life now is very painful.’

However, Anima contrasts awareness of dementia in England with India, where she feels the condition is less well understood.

‘Family in India aren’t always familiar with it, but in this country people have a good understanding – they sympathise. It’s such a common disease,’ she says.

Support for carers
Back to top

Dear Anima, thank you for sharing your story. It does help others. I care for my father with the help of some brilliant carers as I don't live on the doorstep and I find hearing what other people are dealing with makes me feel less alone. It's a tough road we walk. Well done for all that you do for your husband.

Anima - Thank you so much for sharing this and sending you many well wishes. It is a very difficult path and sometimes we can say that the care in homes will help them professionally and also not impact your health doing it on your own. I hope the Asian Support Group is available on zoom for you too and would be nice if rolled out in the UK. I currently co-host a group for Diabetes UK for the South Asian Group.