Read how our Dementia Support Service is helping people affected by dementia and carers in Plymouth. 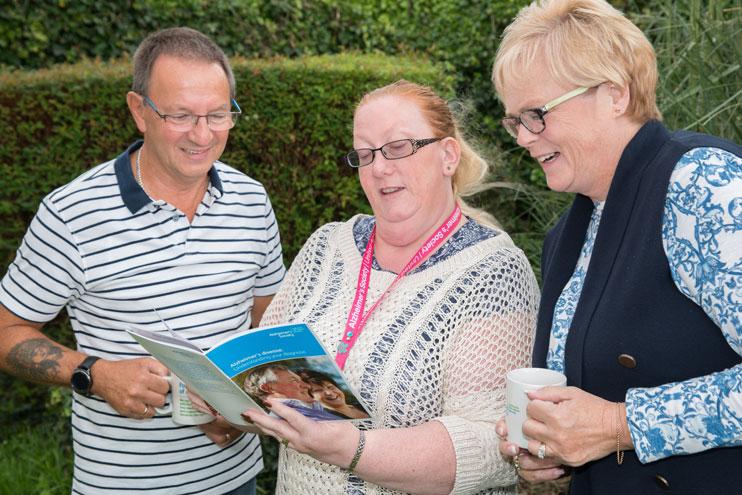 Supporting people with dementia over the phone

Get the skills you need to be able to communicate effectively over the phone with people living with dementia.

'What would I do without you?' says Marie Dockar. 'I would not have anybody who really knows what my husband and I are living with.'

Marie, aged 90, has been married to Dennis for 65 years. Now that he has Alzheimer's, she cares for him at home. As resilient and resourceful as she is, Marie is grateful for the Society's Plymouth Dementia Support Service, particularly Dementia Support Worker Janet Earp.

'I know that if I am ever in a fix, I can get in touch with her,' says Marie.

The service provides regular contact and ongoing support to people affected by dementia, from diagnosis onwards.

Ruth Bishop, who manages the service, says, 'When it came into existence four years ago there was no equivalent available. Feedback from people receiving a diagnosis was that, once they had got this news, they were "left to it".'

James Agnew was diagnosed with Alzheimer's and vascular dementia two years ago, aged 60.

He says the memory clinic didn't explain about anything except medication, but things improved once he and his wife, Debbie, were in touch with us.

'They follow up all of the time,' he says. 'They assisted with benefits and lasting power of attorney, which I hadn't even thought about.'

Debbie was especially thankful when she had what she calls a 'little meltdown' a while back.

'I was tearful, it was all too much,' she says. 'They helped me to feel positive, reassured, and sent loads of information. I feel a lot more positive after our meetings, and I know I can just pick up the phone.'

Feelings after a diagnosis and as dementia progresses

After someone is diagnosed with dementia and as it progresses, they and the people close to them may have many different, conflicting feelings.

As a Dementia Adviser Volunteer, a key part of Rebecca Broad's role is to provide regular telephone contact.

'People with dementia and their families tell me all the time how much they appreciate someone checking they are OK,' she says, 'or helping them find that one bit of information they needed, or simply just being able to chat with someone who has time to listen.'

Stuart Brown, aged 51, has Korsakoff's syndrome, a rarer cause of dementia. He is determined to keep living life to the full, taking up old and new hobbies and sports, and our service helps him do this.

'I now feel like I'm not isolated, which I felt at first – no longer alone,' he says. 'Because of the support, I no longer have a feeling of dread or worry.'

He appreciates how easy it is to get in touch for help when he needs it, adding, 'Nothing is too much trouble.'

Assessment and Diagnosis, Support
Back to top