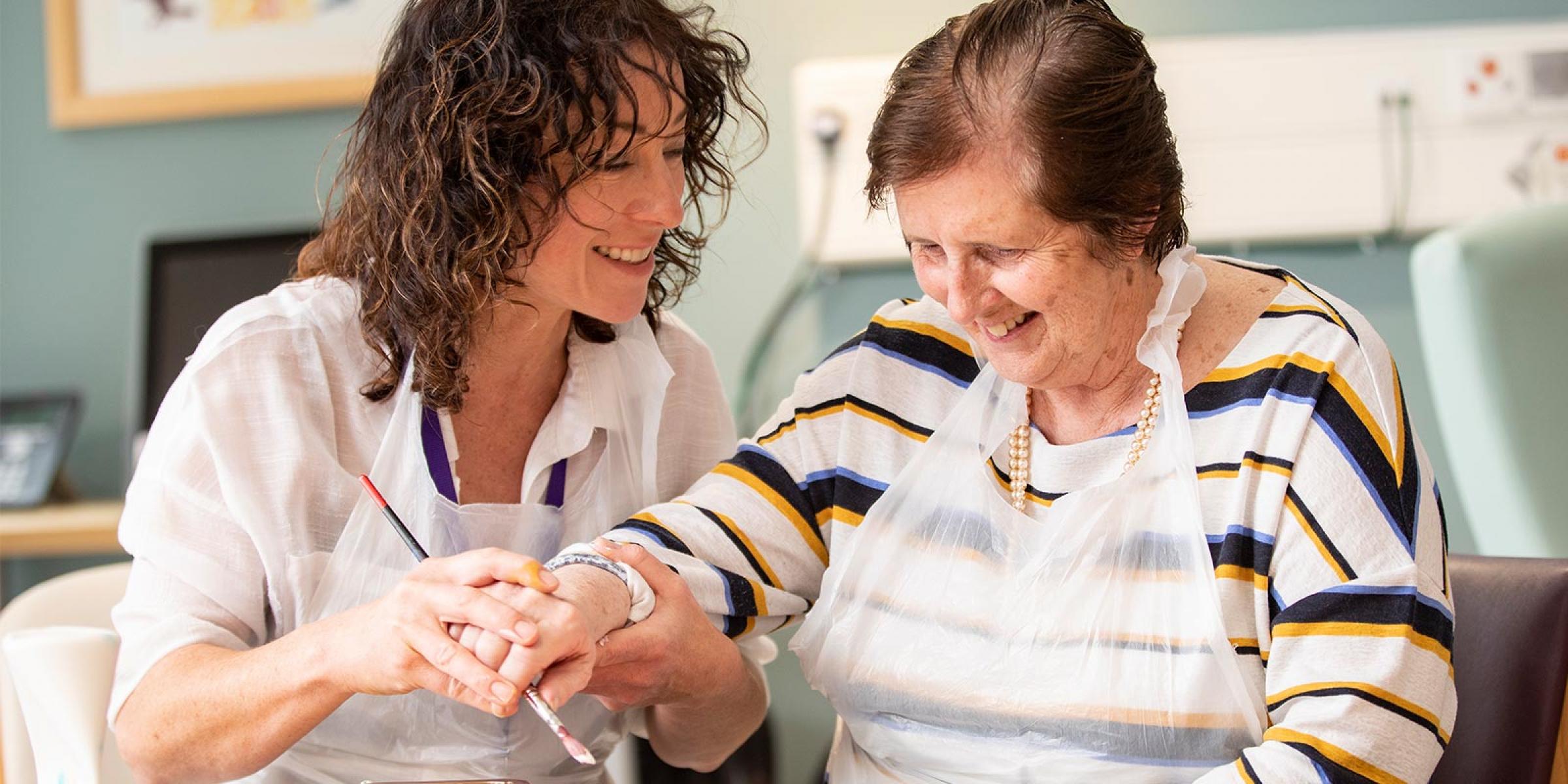 A hospice in Belfast is addressing the physical, emotional and spiritual needs of people affected by dementia.

The Dementia Wellbeing Clinic at Northern Ireland Hospice, Belfast, offers activities and support to people with dementia and their relatives or carers.

‘Back in 2013, referrals to our service for people with dementia were limited,’ says Joanne Ballentine, Hospice Nurse Specialist for dementia. ‘We recognised that our services needed to be more bespoke to support people with the condition.’

The clinic, which people attend for eight to 12 weeks, launched last year after a three-year dementia project at the hospice was completed.

For a few hours every Friday, group members enjoy creative therapy such as art, music or reminiscence, complementary therapies like massage or reflexology, or simply a space in which to socialise or feel stimulated.

Hospice staff and other professionals are on hand for people to discuss any physical or emotional symptoms that they or their loved ones are experiencing.

‘We focus on their holistic needs,’ says Joanne. ‘If a person’s behaviour has changed, we’ll look into what’s causing it and come up with a plan.

Pat Smith is attending today’s clinic with his wife Angela, 70, who was diagnosed with posterior cortical atrophy, a rarer form of dementia, around seven years ago.

While Angela enjoys getting her nails painted by a hospice volunteer, Pat explains why they come to the sessions.

‘The group is excellent,’ he says. ‘The volunteers are giving their own time to help their fellow man.

‘The big thing for us is to get out of the house and socialise – that’s very important. Otherwise Angela would just watch TV and fall asleep.’

He also appreciates the opportunity to spend time with the other carers, in a different part of the hospice, for peer support.

‘We talk about the week we’ve had,’ he says. ‘It’s a sounding board where carers can verbalise concerns.’

‘We didn't realise there were so many people in the same situation,’ says Liam.

Liam Irvine attends the group with his wife Eileen, 82, who has dementia.

‘We came through a doctor's referral and it's the best thing that ever happened,’ he says. ‘We didn't realise there were so many people in the same situation.

‘Eileen loves it here. They have a singsong and she sings her head off.’

Liam is grateful for the support of the ‘wonderful’ hospice staff.

‘The help they give is absolutely first class,’ he says. ‘They invite you to ask questions and they speak as it is.

‘Coming here has helped me to have a different outlook.’

Use our Dementia Directory to find dementia services near you

Last week the group had a church theme for Easter, which Liam describes as the best Good Friday he’s ever had.

The range of activities, therapies and support on offer mean there is something to suit all tastes.

‘I’ve done a wee bit of artwork here, which my daughter thought was lovely,’ says Paul.

‘We had an Easter service last Friday but I'm not religious and I wasn't engaging,’ says Paul, 64, who has dementia. ‘So I went and had a reflexology session instead – it’s really good to have that quiet space.

‘I’ve also done a wee bit of artwork here, which my daughter thought was lovely. She has it on the wall.

‘It’s good here, there’s a good comradeship in the group,’ he adds. ‘Caring is draining, so it’s very important that my wife can have a break in a safe venue with safe people.’

When the carers head off for their peer support session, the others play games, paint or simply have a chat.

For group member Patricia, the best aspect of the clinic is being able to speak with others.

‘I just like to get out and be amongst people,’ she says.

The clinic is supported by a team of highly regarded volunteers, many of whom have personal experience of dementia.

‘I think that gives you an insight into it,’ says Deborah McFarlane. ‘We strike a relationship with patients and carers.

‘The group is so beneficial to them – it’s such an important service in this community.’

There are lots of great ways to support Alzheimer's Society, but our volunteers make a special difference for people affected by dementia.

A full-on singalong is now taking place in the main room, with the group belting out some old favourites. Lending her voice to the choir is Tracy Smyth, an Alzheimer’s Society Dementia Support Worker, who joins the clinic every other week to build relationships with patients and carers.

‘I can provide a continuity of care by offering support after the 12 weeks,’ she explains. ‘The carers get a familiar face and know I’m just a phone call away.’

Tracy sees this sort of partnership work as vital.

‘The hospice has expertise in palliative care and we have expertise in caring for people with dementia, so the clinic here encapsulates everything.’

Joanne says the hospice recognises that it needs to be accessible to people affected by dementia, and not only to people with conditions more traditionally associated with hospice care, such as cancer.

The next step is to make sure other health professionals know what the hospice offers people with dementia and carers.

This means working in partnership to encourage timely referrals. Joanne says, ‘The message is getting out there – we just need to keep promoting it until it becomes the norm.’

Hospices, Northern Ireland
Back to top