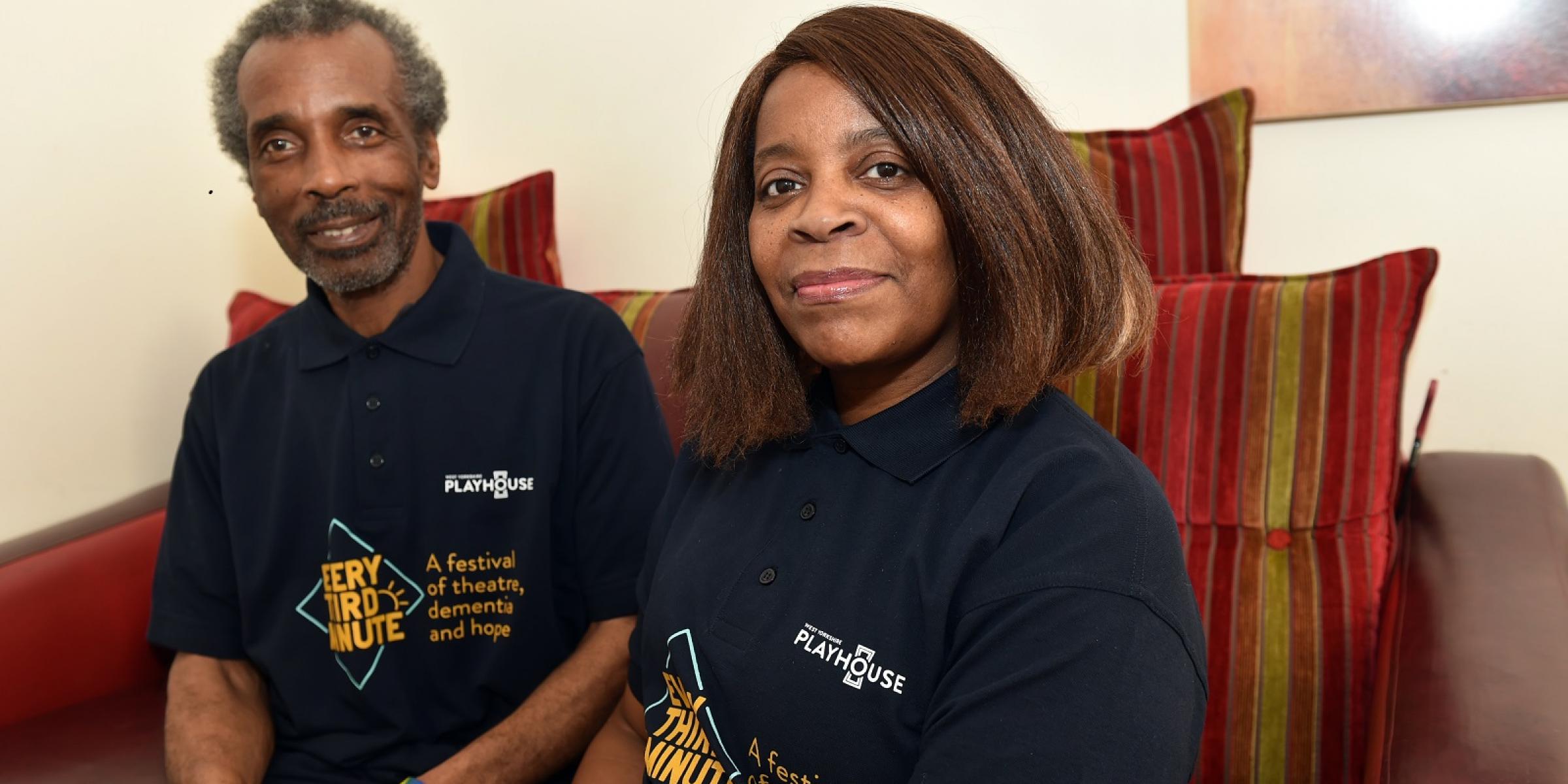 Music and theatre have provided a valuable focus for Diana Smith-Harris’s positive approach since her husband’s dementia diagnosis.

‘We understand that this is happening and we can’t change it, so we just need to embrace it.’

Rather than be distraught or even downbeat about her husband’s dementia, Diana Smith-Harris wants to approach it as simply another step on their journey together.

Through music and theatre, the couple have been demonstrating what  people can still achieve after a diagnosis of dementia.

Diana, 58, was a social worker for 31 years before retiring, partly to ensure that she could best support her husband Eugene, who has Alzheimer’s, at their home in Leeds, West Yorkshire.

Eugene Harris, now 66, came to England aged four from the Caribbean island of Saint Kitts. He was a self-employed upholsterer, building a successful business through word-of-mouth recommendations.

‘He was a perfectionist,’ says Diana. ‘He didn’t want anything coming back.’

Eugene is also a classically trained pianist who plays the keyboard and steel pan, while Diana is a singer. They met around 20 years ago after Diana filled in for another singer in Eugene’s steel band.

‘I ended up staying in the band and we got together – the rest is history!’ says Diana, who has been married to Eugene for 15 years. ‘Music was what really pulled us together.’

Memory loss is a distressing part of dementia, both for the person with the condition and for the people around them.

Eugene was diagnosed with Alzheimer’s disease in September 2016, following memory problems that had started two or three years before.

‘I noticed he was forgetting things. He'd leave his van down the road and forget he was driving not walking.’ says Diana. ‘He also couldn’t recall which customer each piece belonged to.’

Eugene took himself to the GP and underwent various tests over a couple of years, with a brain scan eventually leading to a diagnosis.

At the time, Diana was keen for the consultant to understand how cultural factors might affect Eugene’s performance in some of the tests.

‘We thought it was Alzheimer’s and we now knew – at least it was official,’ says Diana.

‘He was asked to recognise different types of gate, but because Eugene spent his early life abroad, his memories might be different. He may not have known different farm gates and garden gates,’ she says.

‘The consultant assured me he was sensitive to these things and had a lot of experience with patients from the Caribbean.’

Diana was actually quite relieved following her husband’s diagnosis.

‘We thought it was Alzheimer’s and we now knew – at least it was official,’ she says. ‘We could now  move on and look at medication to keep him going. I started to find out what groups were out there.’

Eugene and Diana attend a peer support group run by their local authority in partnership with local cultural groups.

This involves things like trips to museums and visits from music students. They are part of a monthly dementia choir and weekly walking group, and took part in last year’s Memory Walk. Diana also goes to carer support sessions.

‘We’ve just thrown ourselves into whatever’s out there, life hasn’t stood still,’ she says.

Since Eugene’s diagnosis, Diana has maintained a very positive attitude and outlook.

‘I don’t know where this resilience comes from, but I take it all in my stride,’ she says. ‘I’m under no illusions that things will get worse, but if so I’ll come up with a new strategy.’

Support for people affected by dementia

Use our online directory to find dementia services near you

Eugene likes walking and goes out on a set route two or three times a day. He recently had a fall, which concerned Diana, but she remains determined that he be supported to keep doing the things he enjoys.

‘Although I obviously wondered if he was going to be OK, I’m not going to stop him going out,’ she says. ‘We’ve just got to move on to another day. It’s nice that he can go out for the moment.’

Diana and Eugene have the support of neighbours, friends and even local businesses.

‘I’ll often get phone calls from people looking out for him,’ she says. ‘If he goes into the bank but gets a bit agitated, they’ll ring me and I’ll come and get him.’

One of the partner organisations of their peer support group is Leeds Playhouse. Last year the theatre, then known as West Yorkshire Playhouse, brought together a group of curators – people with dementia and carers – to create a special dementia-related theatre festival.

‘People think dementia is all doom and gloom, that people’s lives are ended after a diagnosis, but for me it’s people’s lives just beginning again,’ says Diana. ‘The word “hope” kept coming up. We wanted to give that positivity.’

The festival curators took on tasks such as vetting plays, turning to the Leeds Playhouse team when they needed help with aspects such as publicity.

‘People took the festival to their hearts and could identify with it,’  says Diana.

‘Things weren’t done to us, we were involved in making them happen,’ says Diana, who valued the spirit of teamwork among the curators.

The festival won a National Dementia Care Award and got great feedback from audience members.

‘People said to us, “That story you told could have been my sibling or parent.” They took it to their hearts and could identify with it. They liked our positivity about dementia.’

Not wanting their work to end when the festival came to a close, some of the curators have visited care homes to hold further sessions. Eugene and another group member played music while Diana and her fellow curators led residents through singing exercises and simple activities, including a mirroring game.

‘We now want to adapt it for specialist dementia groups for those with complex needs.’

In the meantime, Diana wants to continue to be as upbeat and optimistic as possible in supporting her husband.

‘It’s like we’re going through another journey within our life,’ she says. ‘There’s an issue but we’ve got to embrace the moment and live with it.

‘I just work here and now, to make it as pleasant and comfortable for Eugene as I can.’

More from Dementia together magazine: Apr/May 19:

Dementia together magazine, Music and Singing, Alzheimer's disease
Back to top

What an.inspirational story and a true demonstration of love beyound measures. God bless you both. Margaret Smith

Such an inspiration of true love and commitment Diane. Thank you for sharing.

Well done Diana, how uplifting to read this but you must have great strength and of course lots of love. Take what you can from it.
PS wish I could play pan especially after growing up next door to a band ! or the piano- gave up on Grade 1! Keep going, follow the rainbow.

This is a very inspiring story, lovely reading keep up the good work with Eugene, Diana.

My name is Zephaniah McIntosh I have now become apart of Eugene support network through a faseing Induction.
It is a great pleasure to have been askred to be involved in supporting Eugene.
I visit him once a week this was through an induction faseing plan between me and Diana where I befriended Eugene
This is on a voluntantry basis to build up a good friendship and relationship with consistency and continuity for Eugene.
This has worked extremely well and now we have a good working friendship and working in partnership with Eugene.

Lovely articlal. Diana is beautiful inside and out and valuable friend to many 😊

So uplifting and informative. Thanks Diana for reminding us that with love, determination and support, we can meet any challenge life throws at us.

Except when your partner is in complete denial and forbids any discussion of the future. I wish my partner would accept his diagnosis so that we could move on together. All dementia has done for us is rip us apart. But I am glad some people have a more positive story to tell.