Real stories
Every step counts: Memory Walk is a great opportunity to support each other
Dementia together magazine: June/July 20

A supporter in Nottingham is taking part in Memory Walk again this year having seen the impact of dementia on her own family.

Estelle Clarke in Nottingham is taking part in Memory Walk this autumn to support people affected by dementia, now and in the future.

Estelle’s father Philip, who lives in Derbyshire, was diagnosed with frontotemporal dementia in May 2016, aged 56. His brother also had the condition, which is sometimes called Pick’s disease.

‘Even though we’d been through the same with my uncle, it was still a complete shock to all the family,’ says Estelle, who was only 24 at the time.

‘We’ve had to support each other through all the difficult times.’ 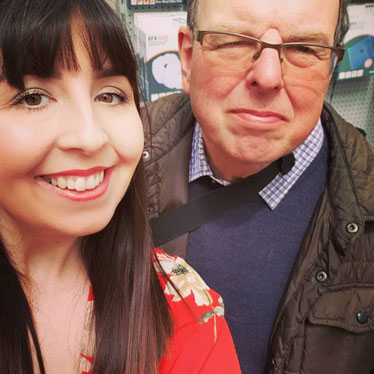 Want to do some feel-good fundraising at home? Have fun, stay safe and make it matter!

Philip’s condition can cause him to get frustrated or lose patience very easily. On one occasion after a medical appointment, he pushed his wife into their car in a burst of anger.

‘That was incredibly tough to witness,’ says Estelle.

‘Mum is an incredibly patient woman and has been unbelievable in caring for Dad. We try and support him and make sure he is happy, but it’s not been easy.’

Philip, now 60, is very protective of his finances, which Estelle has to take a lead on now.

‘I had to mature very quickly for my Mum and Dad,’ says Estelle, who received advice from the Society’s support line about power of attorney.

Wanting to raise vital funds for Alzheimer’s Society, Estelle first joined Memory Walk in 2016 with her parents, brother and fiancé. She’s taken part with a friend twice since then and plans to walk again this year.

Every pound raised helps us get one step closer to a world without dementia, and you can even complete your own Memory Walk by doing laps of your garden, local park or revisiting somewhere special.

For Estelle, Memory Walk is a great opportunity to support families like hers.

‘We had known so little about dementia, so it was a chance to share our experiences and help others who were going through the same difficulties,’ she says.

‘I know that it would have been such a great help for me to have read about someone my age whose family was going through this.’

Estelle hopes more research will mean that she or anybody else who might develop dementia in future can have the best chance of living well with the condition.

‘The more money and awareness we can raise now, the greater chance of help at a later stage,’ she says.

Be part of Memory Walk

Every pound raised is one step closer towards life-changing breakthroughs.