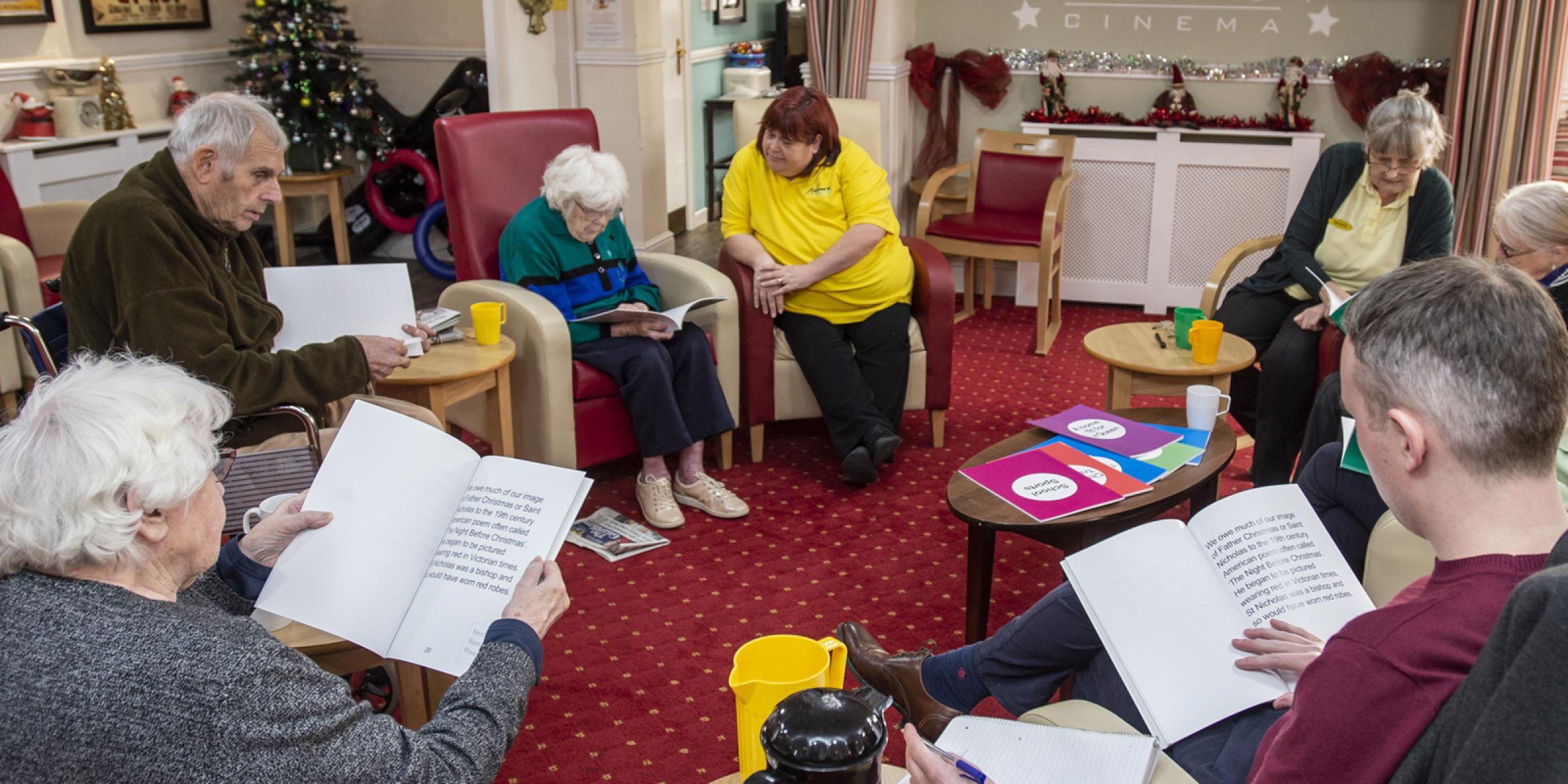 A Montessori approach is helping people with dementia to enjoy a feeling of purpose.

The Montessori approach is most closely associated with early years education, but its methods are being used to help support people with dementia. Dementia the Montessori Way was set up by Lynne Phair and Sally Dando, two experienced healthcare professionals.

‘Montessori enables people with dementia to be as independent as possible, have a meaningful place in their community, make a meaningful contribution to that community, have high self-esteem and a feeling that they belong,’ says Lynne, an Independent Consultant Nurse.

Specialist book clubs, in hospitals or any care setting, have been a key element of this approach. Facilitated by staff or family members, the clubs are a place for people with dementia to enjoy conversation and company. Some of them achieve specific goals, such as reading a certain amount, while others simply benefit from the stimulation.

The books they read are especially written by Lynne and Sally for people with dementia. Professionally published, the books don’t contain distracting pictures. How the writing looks, including its size and how it’s laid out on the page, has been tested with groups and individuals to make sure that people with dementia can enjoy the books.

It’s early December and the book club at Ashbourne Lodge care home in Derbyshire is reading ‘Deck the halls!’. Guided by Maddi, the home’s Activity Co-ordinator, they take it in turns to read a page each, with support where required. The Christmas-themed book prompts conversation about mulled wine, stockings and Santa.

‘There were a lot of things in there I didn’t know about at all,’ says Iris. ‘These books are nearly always full of things I’d never heard of.’

Next on the reading list is ‘Anyone for tea?’, about the history and culture of tea drinking. The group has previously read books about the Queen, the nearby Derwent Valley and school sports.

‘It said that physical education is sometimes a lesson that kids dread. I might have been one of the ones who dreaded it the most – hockey on a rainy day!’ says Iris.

Use our Dementia Directory to search for local services.

‘We make the group relaxed, like people were reading at home, but also sociable,’ she says.

‘It’s lovely to hear the books read out, especially by people who don’t say much. Even if a person struggles to read, they are still able to join in. It’s also lovely to involve residents who aren’t able to leave their beds – we go to them two or three times a week.

‘The books are really good and prompt a lot of reminiscence. They provoke different stories for different reasons.’

The book clubs have been a success in hospital too, explains Lynne’s colleague Sally, an Occupational Therapist.

‘I have a team of occupational therapy assistants, trained as facilitators, who go onto a bay and invite people to join the book club,’ she says.

‘Value a person, give them a role and think about their strengths,’ says Lynne.

‘It’s a great activity to get people out of bed and talking to each other. We’ve had a number of lightbulb moments – people who are not happy in hospital but join in an activity and blossom.’

The books are designed to be straightforward but not patronising, and to raise a reader’s self-esteem by helping them to succeed. However, as Lynne points out, the Montessori influence isn’t found within the books themselves, but rather in how they are used.

‘It’s about invitation, courtesy and grace,’ she says. ‘Value a person, give them a role and think about their strengths. That gives them a sense of interest, purpose and enjoyment.’

Pat enjoys the books as she can relate to the subjects, while Tom, a group member who doesn’t have dementia, finds that they bring back memories.

Joyce finds the books quite easy to read, while Joan says that the larger print makes things more manageable.

Joan, who’s building her confidence reading after some time away from the group, describes the books and the club as ‘marvellous’ and ‘very entertaining’.

‘We’re friends – the group are like a cloak around,’ says Pat.

The group is small, which Pat finds easier to cope with, while its humour and camaraderie also appeal.

‘We’re friends – the group are like a cloak around,’ she says. ‘We laugh about things, I love doing the group.’

Joyce, who particularly liked the book about the Queen, enjoys getting praise for her reading. ‘I’m a lover of that,’ she says.

Joyce is happy to involve herself in any activity she can, while Iris is very much the opposite.

‘Usually I don’t like doing things, but I’ve enjoyed this,’ she says.

Care homes
Back to top

my place of work would very much like to purchase a set of the books - how would we do this please?
thank you very much
The Lenton Centre
Nottingham

Hi Teressa, the books mentioned in this article can be purchased from Dementia the Montessori Way's website here: https://dementiathemontessoriway.co.uk/the-uk-dementia-and-supported-li…

Thank you for getting in touch.

Fantastic idea but as it follows Montessori principles I’m not surprised .. I will share with care workers locally .. thank you 🙏