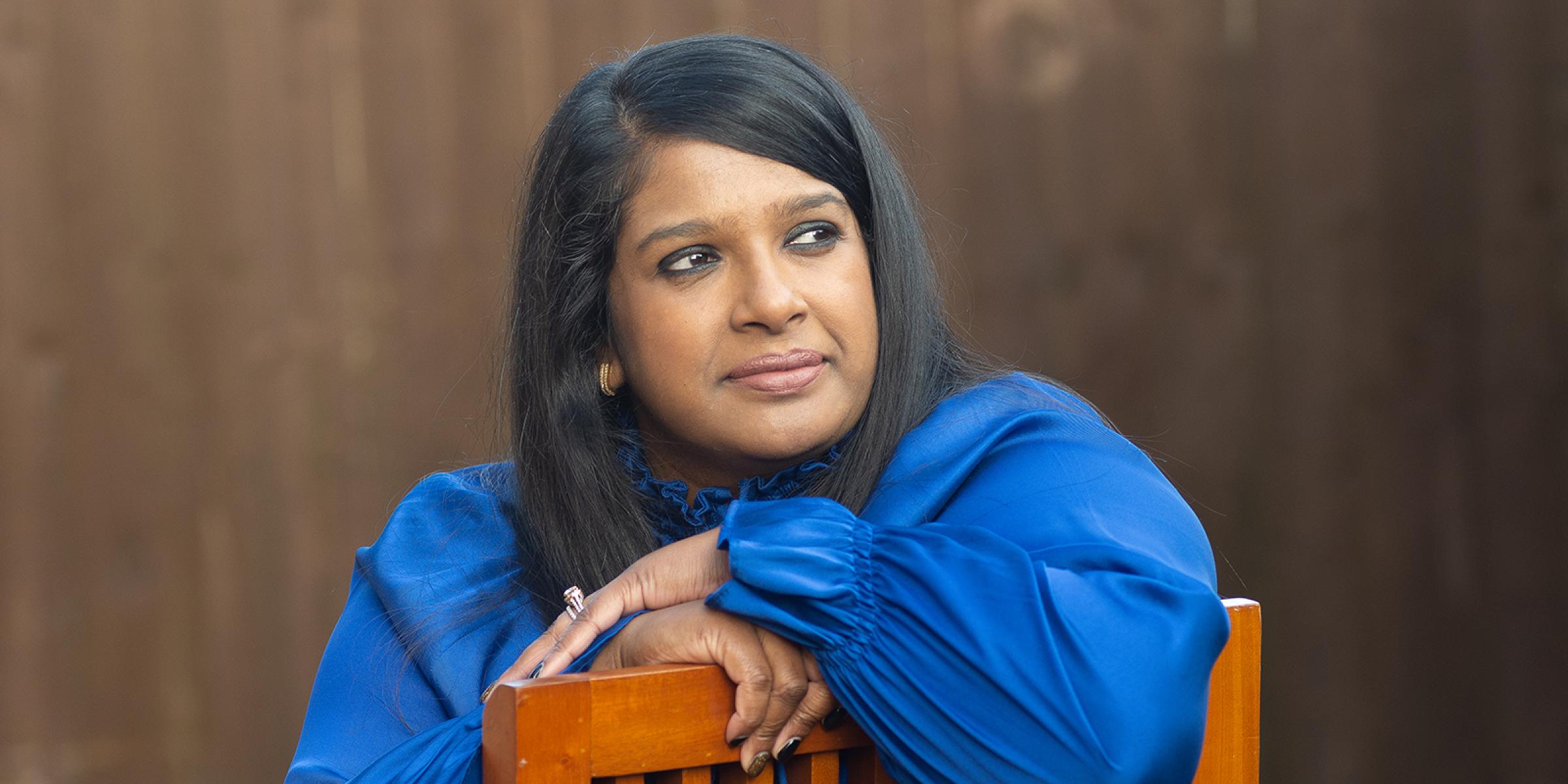 Versha Patel knows what it’s like to face criticism, stigma and a lack of understanding about dementia.

When her mum Sitaben was diagnosed with vascular dementia, Versha Patel dedicated herself to finding and providing the best support she could. However, some of her actions were misinterpreted by other people – including members of her own family – leaving her exposed to rumours and judgement.

With the support of her husband and others, Versha found the strength to not only ignore the criticism, but also offer to help others in a similar situation.

Born in Kenya in 1943, Sitaben Patel lived in India before getting married in her early 20s. She came to England with her husband Mohanbhai in 1964 and the couple later ran an off-licence in Bolton until his retirement in 1999.

‘They were the first Indian family in the area where they had the shop and it was quite difficult culturally,’ says Versha, a security manager who lives in Bolton. ‘There were a few racist attacks on the business.’

Sitaben, who also worked as a machinist, was always a supportive and very independent person.

‘She helped her siblings settle when they first moved to Bolton and cared for her mum and dad,’ says Versha.

‘Apparently Mum was the first Indian woman in the community to pass her driving test. She did the cash and carry while my dad stayed in the shop.’

Mohanbhai died not long after his retirement, and this had a huge impact on Sitaben. She turned her attention to helping raise Versha’s young daughter, Hannah.

‘Mum adored Hannah,’ says Versha. ‘I think looking after her granddaughter brought her back to life after Dad passed away.’

Social care professionals can help you with non-medical support. This could include support at home with dressing or bathing, social activities, day care or respite care.

Sitaben would visit India almost every year, and it was on a trip in 2011 that Versha first noticed changes in her mother’s behaviour.

‘I stayed with her for two weeks and she was getting confused and experiencing some incontinence,’ says Versha. ‘She told me to take Hannah to visit a relative, but it was someone who had died years ago.’

Versha visited her GP back in England, who put together a plan of action for when Sitaben returned. This led to tests and a diagnosis of vascular dementia in May 2011.

‘I did a lot of research – I was on the internet every night,’ says Versha.

Versha immediately sought to discover more about the condition.

‘I did a lot of research – I was on the internet every night,’ she says. ‘I had to think long term, so I was looking at social care, assessments and carers.’

Versha, her brother Yash and Hannah all cared for Sitaben around their existing work and school commitments. The family also received good support from Sitaben’s younger brother and his wife.

Versha found it difficult to secure appropriate and good quality professional care for her mum.

‘I had an approved carer from the council but that was diabolical. They would turn up late and forget to give the medication,’ says Versha.

Sitaben was initially granted only half an hour of care a day to help take her medication, but Versha battled to get her more. She arranged for Sitaben to have replacement care, which highlighted just how much support her mum now required.

‘I'd complain about anything, but I wanted to make sure Mum got the best care,’ says Versha.

‘I had various meetings with social workers. My auntie and I eventually went to the head of social care,’ she says. ‘We had to fight to get 37 hours of care a week – something I felt Mum was entitled to because she’d worked really hard when she came to this country.’

Versha was fully prepared to take action if she felt that acceptable standards weren’t being met.

‘I'd complain about anything – some of the carers were probably quite shocked, but I wanted to make sure Mum got the best care.’

Our publications provide advice on caring for a person with dementia.

Sitaben’s health was deteriorating and she was losing mobility, prompting Versha to request that family members phone ahead before visiting. However, some relatives took this as a sign that they were no longer welcome.

‘I had to tell people to ring before coming round, otherwise Mum would have seen them through the window, get up and risk hurting herself. But some family members didn't understand,’ says Versha.

‘People started spreading rumours that I wasn’t looking after Mum properly and that I was going to steal her money and house,’ says Versha.

‘I felt bullied by family and community members. I’d take Mum to festivals and weddings, to try and have a normal life, but it was very difficult. I felt I was being watched.’

Versha married Manish in 2013, and he immediately became a great source of support, along with her brother Yash and Hannah.

‘Some people wouldn't want to come into a marriage knowing their mother-in-law was ill, but he was very committed to looking after Mum,’ she says.

‘He gave me the strength to not listen to others.’

Sitaben enjoyed being at home, watching Indian TV channels and EastEnders. The family also held religious ceremonies and birthday celebrations in the house. However, as time went by she became even less mobile and began losing her speech.

‘We'd take her out as much as we could, but she was deteriorating,’ says Versha. ‘I started accepting that Mum was going to die.

‘I made a big fuss of her 75th birthday in April, because I felt something was going to happen.’

‘We had a 13-day mourning period, with the funeral in between,’ says Versha. ‘It was a very peaceful send-off but also a very difficult time.’

Versha wants there to be greater understanding about dementia and its impact on people’s lives, especially among Indian communities.

‘There needs to be more awareness of this,’ she says. ‘People need to understand exactly what this is about.

‘I think I am now ready to give myself to others who are going through what I've been through,’ says Versha.

Versha has started to support other carers who are facing similar challenges.

‘I think I am now ready to give myself to others who are going through what I've been through,’ she says. ‘I’ve got advice on how to keep on at social services, and how to hold your head up and deal with people gossiping.

‘I also feel it’s very important to accept when someone is in their final stages – that helped me become stronger.’

Now able to look beyond what others may say or think, Versha takes comfort from knowing that she did everything possible for her Mum, including at the end.

‘We gave her the best life we could,’ she says.

Vascular dementia
Back to top

I have a close friend recently diagnosed and I want to help but am unsure how to. Any tips please??

Can you get tax relief on Carer's fees and care home fees?

Hi John, thank you for getting in touch.
We'd recommend calling 0333 150 3456 to speak with one of our dementia advisers about care home fees. They're available seven days a week to give you support, and provide information and advice about dementia. You can find opening hours here: https://www.alzheimers.org.uk/dementiaconnect
Wishing you all the best, John.
-
Alzheimer's Society (blog team)

Hi my 89 mum has had vascular. dementia for 4 years. She is in a care home but has her own house. We want to go for funding but are worried about the assessment for the financial side. We have been told by the care home that she isn't bad enough but I really don't know how bad you have to be. She is doubly incontinent, quite deaf
Talks to her doll and thinks my dad who has already died and her mum and dad go and visit her. Wonder what you think. Thanks.

Thank you for posting a comment. You can find details of Alzheimer's Society support here: www.alzheimers.org.uk/dementiaconnect

We hope this helps - all the best.

Thank you so much for your honesty and difficulties you’ve had within the Indian community. My gran has Vascular dementia, and we are really struggling with our carers who do not speak Hindi or punjabi. My mum is doing her absolute best and my sisters and I are all there to try and support her. We’re based in London and understand you were in Bolton, but what was the name of the Gujarati speaking agency? It would be so useful to try and connect with them. Please do let me know:)

Hi Priya,
Thank you for your message. We've checked with Versha and the agency is called Your Care.
Hope that helps,
Magazine team (Alzheimer's Society)

Hello Versha and to everyone else out there....

Your mum was very lucky to have you as her daughter, you should feel proud of yourself.

My mum just recently passed away with vascular dementia and was only 63 with other complex medical problems.

It didn’t matter how much I screamed neglect and safeguarding issues with all the healthcare professionals, my brother got away with it along with all the healthcare professionals. I have lost faith and trust in this system and would love to go and expose everything but being from an Indian background you are meant to let karma do all the work...(what?) I contacted everyone with videos of the conditions my mum was kept in and nobody wanted to know.

It’s a very very sad way for a mother to go..... when all she wanted was unconditional love from her son.

To all those children out there..... love your parents without the thought of your ‘get Rich quick schemes’ because it can happen to you too.

Thank you for reading.

My mums best friend stopped coming to her house to see her as she said it was too upsetting. A few other friends visited her once or twice in the care home but didn't understand if she was having a bad day & wouldn't / couldn't get out of bed & I asked them not to come that day - so they stopped coming. We had a part for my mum's 80th birthday in May. I think it will be her last birthday as she is going down hill quite rapidly now. It's such a cruel illness & so hard to know what to do for the best. No-one can understand unless you have been there