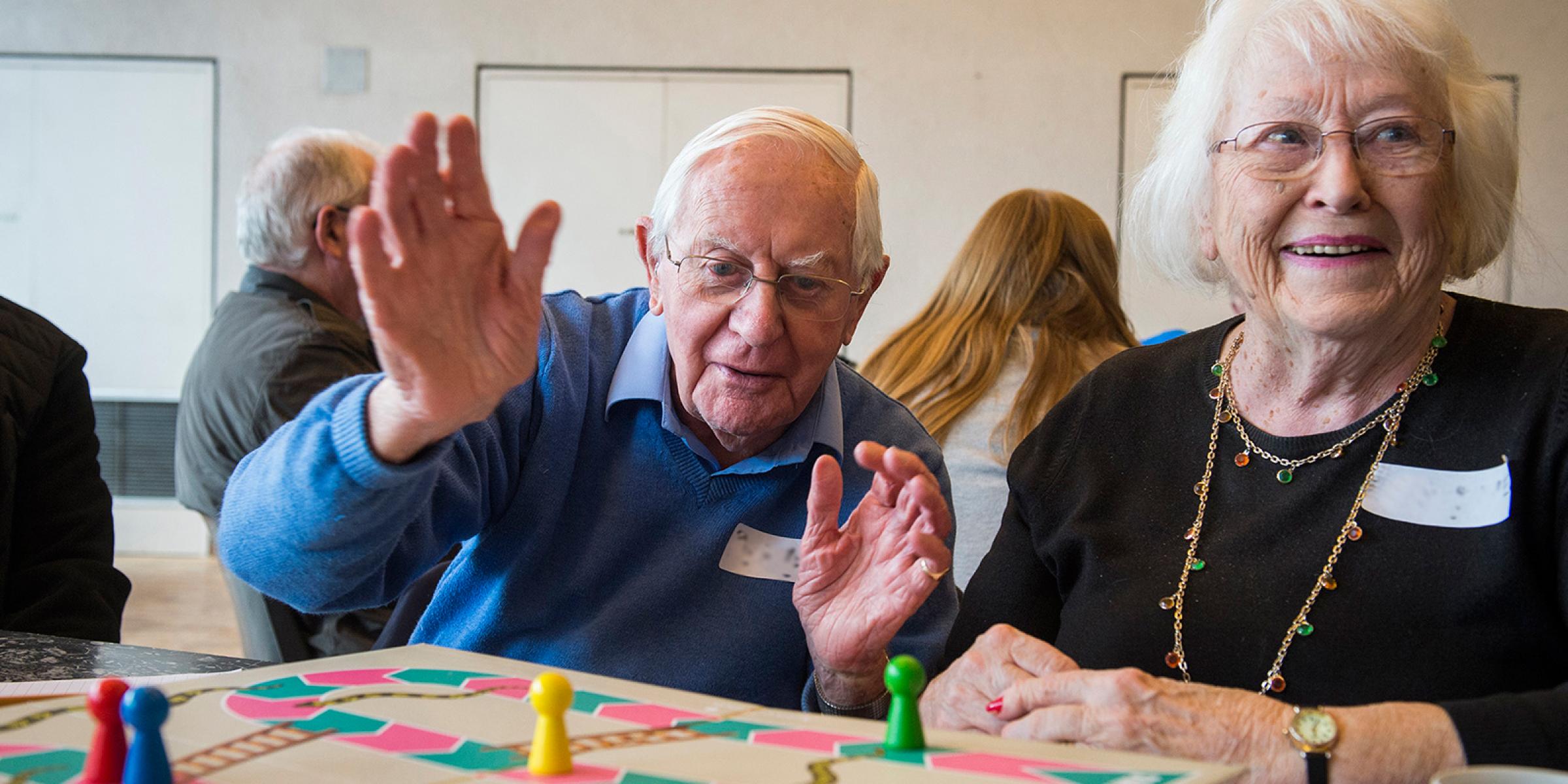 Three groups in Bristol came together and let us know what they think about a selection of gift ideas.

It was a bumper session in Bristol as three Focus on Dementia Network groups came together for a special gathering in the city centre. Facilitated by Alzheimer’s Society staff, these groups ask people affected by dementia for their thoughts and feedback about a range of topics.

We were visiting to get their opinions on games and gift ideas designed with people with dementia in mind, all of which are available from our online shop.

Precious Petzzz are lifelike pets made with synthetic fur, which appear as if they are breathing. The group was shown a dog and a cat that are designed to be therapeutic and provide a sense of security.

People noted how real the dog looked, though there were also some reservations.

‘I think it’s a good idea, but a bit spooky,’ said Iris. Mary felt it was ‘quite pleasant once you get past the “creepy” stage’.

Some group members found the cat comforting and soothing. They thought it could be an especially good gift for someone who used to have pets but isn’t now able to have a real one.

An all-in-one board game set includes simplified versions of two classic board games, with Ludo on one side of the board and Snakes and Ladders on the other.

The Snakes and Ladders design appealed to Desmond, while Valerie thought that having numbered cards instead of dice was a good idea. ‘Dice are fiddly and you’re not so likely to drop cards on the floor,’ she said.

A few of the group felt that the Ludo was too simple and more suited to children. However, it was acknowledged that different games will appeal to people whose dementia is at a different stage.

Although Mary thought the price seemed rather a lot, Desmond felt it was worth it once you see it laid out and start playing it.

Link and Think is a conversation game where players begin by rolling a dice to receive an instruction, for example, ‘Pick two tiles. Which do you dislike?’ They then select the tiles and talk about their choices.

The transport version of the game contains tiles such as ‘ferry’ and ‘steam train’, while the hobbies edition includes ‘fishing’ and ‘knitting’.

Group members noted that the game stimulated conversation and got people engaged. It was also felt to be reasonably priced and nicely produced, with clear instructions.

The game offered many possibilities, even if the conversation went off topic. ‘It could be good for getting to know people, or yourself,’ said Chris.

Each panel of the Throw and Tell Ball features a different preference or experience. When a person catches the ball, they choose one of the panels under their thumbs and talk about that topic.

A few of the group agreed that the ball would suit people of all ages and could be enjoyed by the whole family. ‘Everyone loves talking about themselves, so this is a great game,’ said Ron.

Karen thought the game might not be for everyone. She’d previously played it with attendees at a Memory Café who had felt ‘put on the spot’.

However, Chris said the ball covered subjects that people wouldn’t necessarily think to ask otherwise. ‘It brought out interesting things from around the table,’ he said.

The 13-piece jigsaw, called Curious Cat, sparked memories for Wendy, who discussed the ginger cat that she used to have as a pet.

The puzzle is the easiest in its range, and was a bit too simple for some. ‘We want a better challenge,’ said Sarah, who attends the group with her wife Millie. ‘Something in between this and a 1,000-piece jigsaw.’

The jigsaw comes with a printed backing board that’s designed to assist and encourage a person to complete the puzzle, which people found helpful.

Chris thought the jigsaw was good quality, while another member felt the pieces were a good size for people in the later stages of dementia.

‘It's lovely, isn't it?,’ said Millie, once she’d finished the jigsaw.

These products – along with a range of other helpful products and gift ideas – are available from our online shop.

Prices without VAT (you don’t have to pay VAT if it’s bought to be used by a person with dementia or other condition) – prices correct as of November 2019.

Products with no VAT relief – prices correct as of November 2019.

Equipment and Technology, Communication, Crafts and creative activities
Back to top