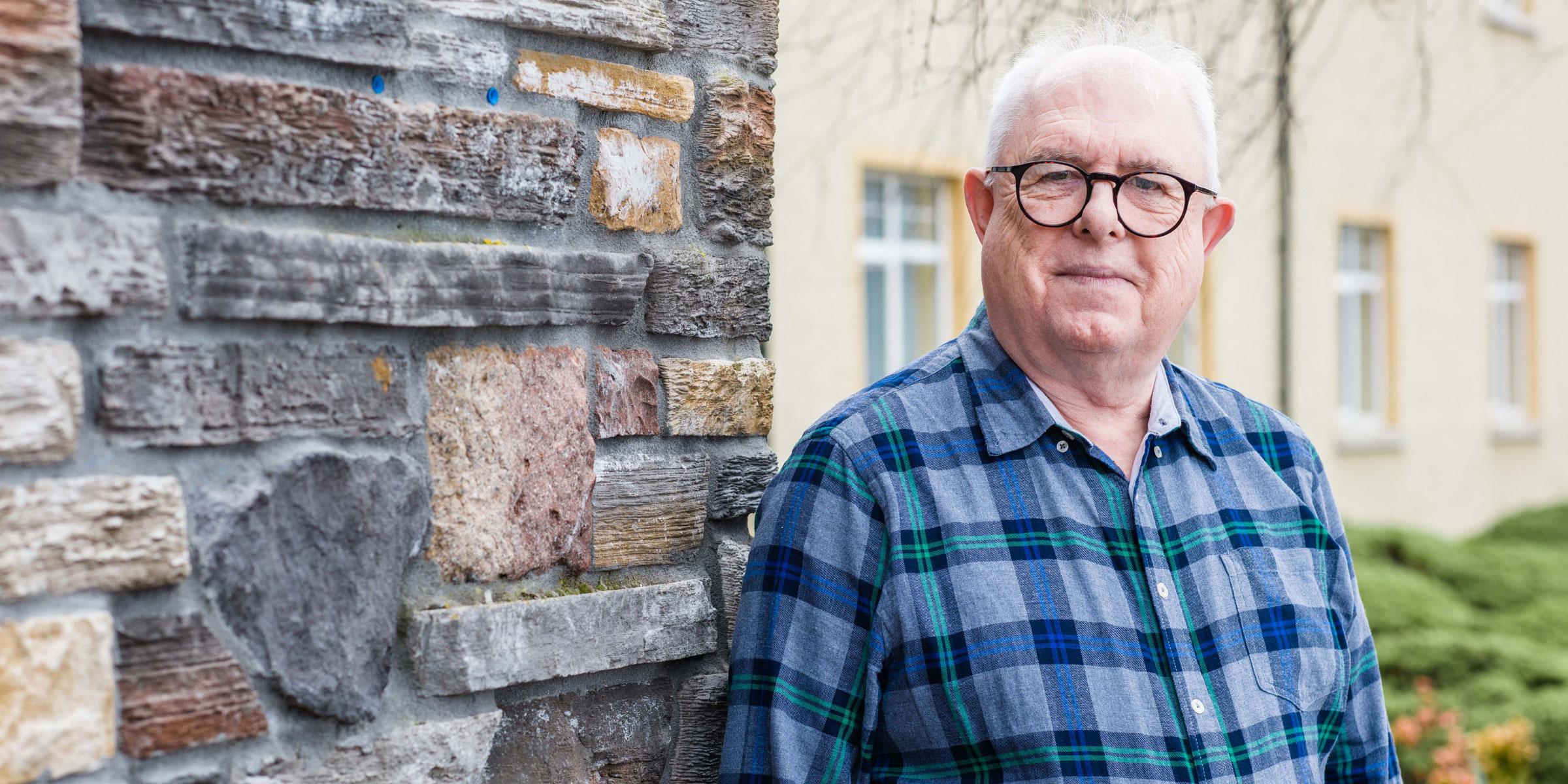 Lockdown paused many of the activities that had been helping Barney Thompson come to terms with his dementia.

‘Every time I tell somebody I’ve got dementia, it gets easier,’ says Barney Thompson, an Alzheimer’s Society volunteer speaker who lives in County Antrim, Northern Ireland.

Barney, who’s 66, has dementia with Lewy bodies, which hasn’t been straightforward for him to accept. But the support he’s had from the Society, and the work that he does for us, have helped him to better come to terms with his diagnosis.

Press the orange play button to hear Barney’s story in his own words – and hear how he was doing when we caught up with him more recently:

Barney was born in Preston in Lancashire and spent much of his working life with the traffic police in Liverpool.

‘It was great fun, I loved the adrenaline rush,’ he says. ‘Once you’ve had it, you want it again.’

Barney moved to Northern Ireland with his wife Catherine in 2002. They settled in Toomebridge, near Catherine’s sister, with Barney taking up a job with the health service.

Barney became a big fan of Ulster Rugby, attending as many of the club’s games as he can.

‘When we came over here, that was the first thing I wanted to see,’ he says.

‘It’s our favourite place,’ says Barney. ‘We like to do turtle rescue – you gather the baby ones in buckets to stop them getting run over or eaten, and they get taken to a safe beach.’

You’re not alone: Keeping in touch and having a say, despite dementia and coronavirus 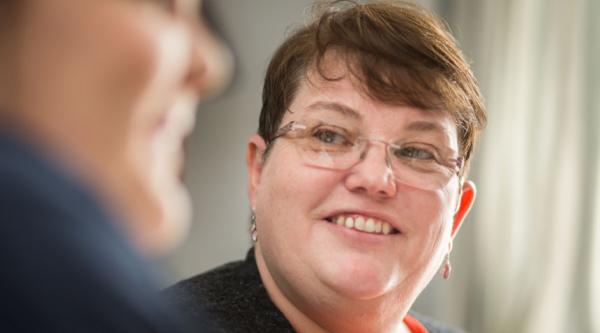 Real stories
Diagnosed with dementia while still in her 40s, Amanda Quinn wants others to know they have a voice.
0

A few years ago, Catherine noticed changes in Barney’s personality and behaviour.

‘I’d just started a new job and he was decidedly off,’ she says. ‘I thought he’d got the hump.

‘Another time he was sent home from work early, because he’d been getting lost on the way there and back.

‘I can look back now and say that, probably over the past 10 years, there’s been some odd things that have happened. But nothing that you could actually put your finger on and say was definitive.’

Barney hadn’t really noticed any major differences in himself, though he does recall one incident at work.

‘I couldn’t remember a shortcut on the keyboard that brought up a particular screen,’ he says. ‘I nearly destroyed a computer in frustration!’

In March 2017, Barney was diagnosed with mild cognitive impairment (MCI), where someone has minor problems with mental abilities such as memory and thinking. This was amended to dementia with Lewy bodies later by a different consultant.

People with MCI don’t all go on to develop dementia, though it does increase the risk. A diagnosis of MCI can be an opportunity to do things to reduce the chance of developing dementia, like making lifestyle changes and ensuring that any other conditions, such as heart problems, are managed carefully.

In his own case, Barney felt as though the MCI diagnosis avoided having to address the seriousness of his situation – ‘tiptoeing around it’ instead of facing the fact that he had dementia.

‘I wish they’d come out with it straight away,’ he says.

Dementia with Lewy bodies can cause problems with attention, alertness and movement, difficulty judging distances, disturbed sleep and hallucinations. However, the dementia diagnosis gave Barney something to work with.

‘It was an answer, a tag,’ he says. ‘It’s positive because I know what it is – I know what’s happening to my brain.’

Barney can struggle with his memory, while his spatial awareness and sleeping are also not very good. However, most of these symptoms are described by Catherine, who says Barney uses jokes or other means to avoid fully acknowledging the effects of his condition.

That said, Barney recently made a difficult decision to stop driving.

‘I feel like I’ve had my legs chopped off. But, having seen what I’ve seen during my working life, I do not want to be responsible for causing damage to anybody,’ he says. ‘If something did happen, I’d never forgive myself.’

Barney has diabetes and is shielding as a result of the coronavirus pandemic, limiting himself to a daily walk with Catherine and their cocker spaniel Charlie.

‘That walk is important, I look forward to it,’ he says.

Change the journey: Moving from fear to hope after a dementia diagnosis 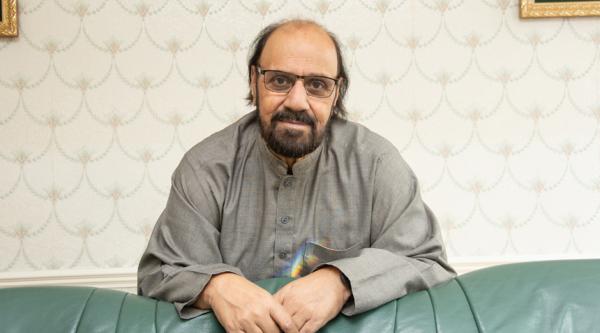 Real stories
Having feared the worst after his dementia diagnosis, Masood Qureshi is now focused on changing people’s perceptions.
5

It’s been a very stressful time for Barney and Catherine, and friends of theirs have died due to coronavirus.

Both of their daughters have been affected in different ways. One, a self-employed stage manager for theatres, has been hit financially. Barney has met her outdoors for a socially distanced conversation, but as of late June he hadn’t seen his other daughter, a doctor, since lockdown began.

‘She’s working on a COVID ward, right at the pointy end,’ he says. ‘It’s just horrible at the moment. My daughters play on my mind.’

Barney worries that his mental abilities may have declined during lockdown. However, he was recently reassured by news that Catherine, who works for Queen’s University Belfast, is likely to continue working from home until the new year.

Barney says he was really struggling after his dementia diagnosis until he discovered Alzheimer’s Society. He’s feeling ‘a little bit empty’ without his usual face-to-face groups and meetings, all put on hold because of coronavirus.

One positive has been continued contact with Society volunteer Hugh. Prior to the pandemic, they met twice a week to play bowls, which Barney misses. This has at least been replaced with video chats via FaceTime.

‘Hugh is very good to me and very good for me,’ says Barney. ‘He’s a grand man, very dedicated.’

As well as receiving Society support, Barney also volunteers for us by speaking at meetings, workshops and conferences about his experiences.

‘I like public speaking. I used to love giving evidence in court,’ he says. ‘I never write a speech or have notes, I just stand there and say what comes into my mind.’

‘I’m able to talk to them the way I’d like to talk to myself,’ he says. ‘I try to give people a bit more self-esteem.

‘If they can see someone who’s got dementia stand up and talk to people, and they get something out of it, then I’ve done a job.’

Barney has had plenty of positive feedback from other people affected by dementia, but he emphasises how doing this work helps himself.

‘I used to find it difficult to talk about dementia, but this helps me to offload and accept what I’ve got. It’s cathartic.’

Barney has raised awareness of dementia more widely too, including helping to make shops and airports more dementia friendly.

‘Awareness in the community is very poor,’ he says. ‘I’ve got a key to disabled toilets because my bladder control is not what it used to be, and the number of times I get sneered at, because dementia is a hidden disability. We’ve had a really rough time with things like that.’

His efforts were recognised at last year’s Dementia Friendly Awards, where he was named Trailblazer of the Year.

‘I was a bit stunned that I got that, I don’t think I do anything!’ he says. ‘It’s very nice though.’

Looking ahead, Barney can’t wait to resume his Society speaking.

‘I’m not enjoying lockdown, but I’ll survive this,’ he says. ‘I’d like to get back doing more work with Alzheimer’s Society – I’ve missed that.’

Coronavirus halted so many activities that help people to cope with their dementia. You can help support people at this difficult time by making a donation.

More from Dementia together magazine: Aug/Sept 20:

Northern Ireland, Dementia with Lewy bodies
Back to top

I really admire Barney's positive attitude and his willingness to talk openly about his dementia. He has found a way of life that gives him a reason for staying active despite his illness, which is surely the main issue.

I have had Alzheimer's Disease for nearly four years, and have recently moved into 'sheltered accommodation' so that practical help is available if I need it, and regular meals too - I often forget about eating. But I really hate having to fit into fixed timetables made by other people...

I have owned a sailing boat for many years, and it would be possible for me to live permanently afloat. I love having an open view with wildlife and boating activities around me. It's a simple way of life, and one that I'm very used to... The main snag, of course, is bad weather...

Maybe I should follow Barney's example and get involved with the fight against Alzheimer's? I am really unsure of the best way to plan for a life that will become more and more difficult in a fairly short time... However, Barney does show us another option, which is to engage with the disease and find a new purpose in fighting it and helping other sufferers.

Well done Barney, and may you have many happy years before you! Best wishes, Martin