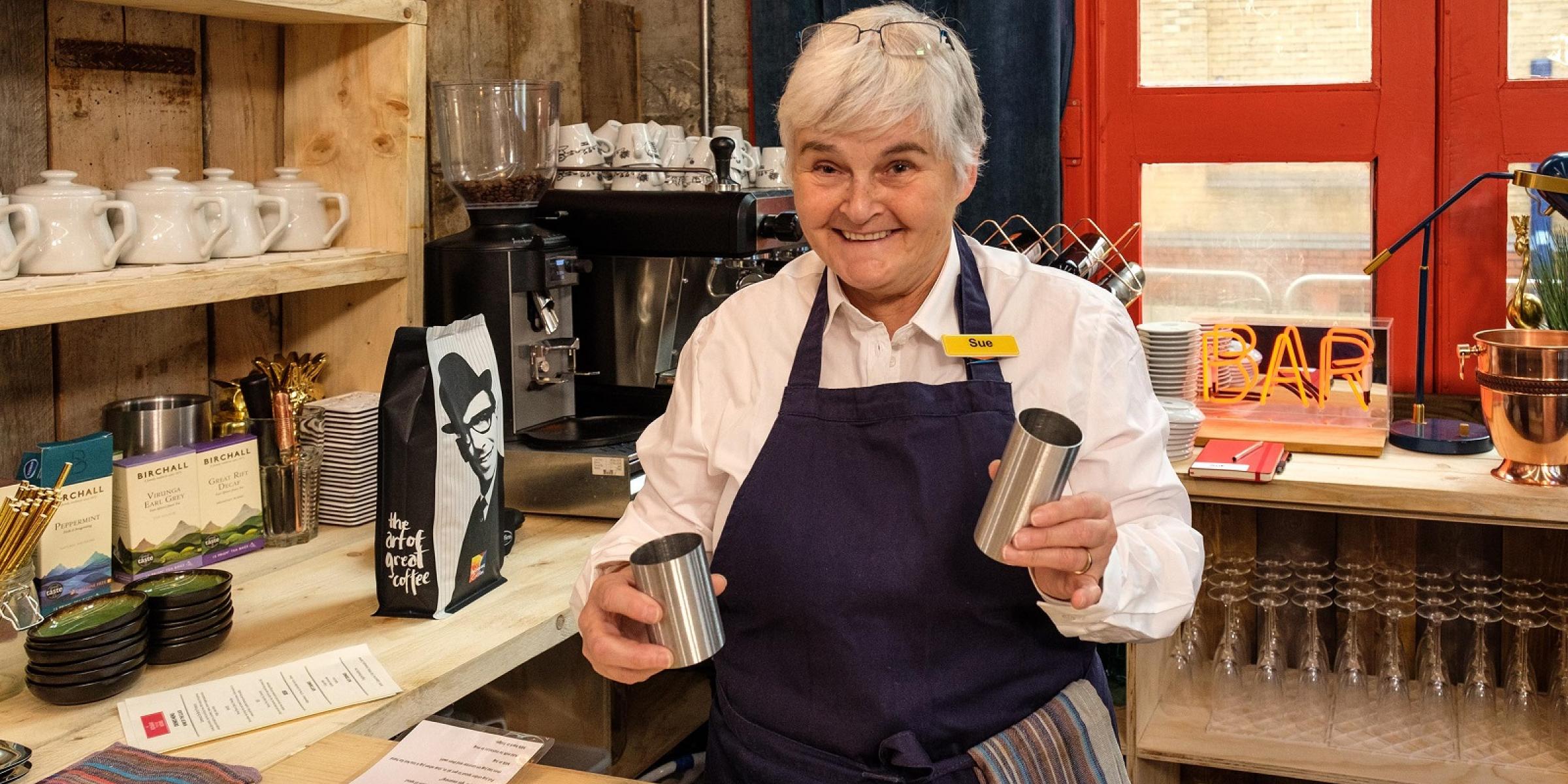 Real stories
Sue’s story: ‘There are so many myths around dementia that need busting and I see it as my mission!’
Blog

Sue Strachan’s myth-busting mission began when she was diagnosed with vascular dementia in 2014. She wants The Restaurant That Makes Mistakes to give hope to others facing a dementia diagnosis.

I was diagnosed with vascular dementia in 2014 after 19 months of tests. I spent some time in denial and believing 'they' had got it wrong. I then had a lightbulb moment thanks to a Dementia Adviser from Alzheimer's Society.

It became clear to me that I had two choices; continue to be depressed and give up, OR get on with my life and share my experiences.

I want to raise as much awareness as possible whilst I still can. There are so many myths around dementia that need busting and I see it as my mission!

My working life was very far removed from the restaurant. I left school in 1972 and worked for WH Smiths for eight years. I was a book department manager for six years, before leaving to become a Sales Rep for Ladybird Books. I was made redundant after 11 years and then spent the next 10 years repping for two major publishers.

The other volunteers at the restaurant were from very mixed backgrounds. They had all done a variety of jobs between them and all had different diagnoses of dementia. Together, we learned to open and run a restaurant in Bristol from scratch.

I found the filming and training for The Restaurant That Makes Mistakes quite hard initially. It became clear that I was one of the more able volunteers and, rather selfishly, I thought, 'hang on a minute I need all my strength for me, not to help others!' But as we got to know each other we became a real team and it was a pleasure to help each other out.

Joy’s story: ‘The restaurant has given a voice to those of us affected by dementia’ 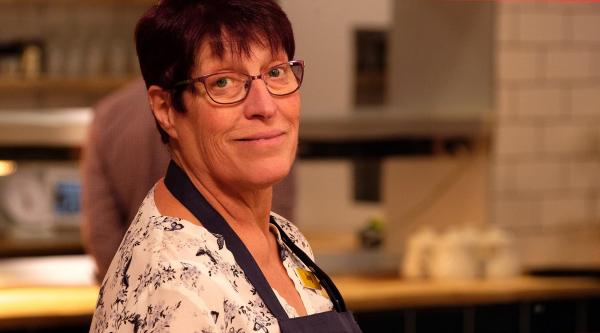 Real stories
Diagnosed with young-onset Alzheimer’s disease aged 55, we hear from Alzheimer’s Society Ambassador Dr Joy Watson as she takes on a new challenge; working front of house at The Restaurant That Makes Mistakes.
7

I made it clear I did not want to be in the kitchen so I was put on the bar and front of house. I loved both roles.

There were several occasions when we were able to make tiny adjustments to the way we worked to make it easier for us all. Making a list of tasks for setting up the restaurant before service, for example. Or little things, like labelling all the cutlery spaces so it was obvious which knives to use.

We had great fun making the programme. There was lots of laughter, often directed at each other. There were also tearful moments too. I have made some good friends from this experience.

I was humbled by some of my colleagues and the way they were coping and also a bit frightened by what they have to live with, things that will in time happen to me.

One message which I want to come through in the programmes is HOPE.

Work and employment, Vascular dementia
Back to top

I've only watched one episode but I'm so impressed and moved by everyone working at TRTMM. What better example could there be of people demonstrating that a diagnosis of dementia certainly does NOT mean a life on ' the scrap heap'. Look for what you CAN do rather than what you can't. Inspirational!!!

What struck me about this experiment was how it showed that if people with dementia have work and purpose in their lives, they improve massively. What if dementia is to do with giving up and withdrawing from life? Then the antidote would be to renew work and purpose. Makes sense to me.

As a caregiver, I took advantage of addressing my mom's abilities before they diminished. We continued her established routines and habits for as long as she was able to perform and appreciate them. Routines such as getting her hair done, pedicures and manicures, going out for Sunday lunch, reading the Bible, and watching her favorite television shows. Even as her abilities diminished I continued the routines at home on a simpler scale. She would glow when she saw other people during our outings and would say "hello" to everyone. With this disease we don't know how fast or slowly the next stage will present itself, so acknowledging their abilities is key. They can retain their dignity and self-worth longer thus helping them cope with this devasting disease and its challenges.

I have been watching Sue's journey on The Restaurant that Makes Mistakes and it has been very inspiring. My Grandmother was diagnosed with Alzheimers at age 40 and suffered from the moment she was diagnosed. I wish that she had had a community she could have joined which would have made her remaining years more comfortable and enjoyable. I've been truely inspired to get involved!

Initially I was misdiagnosed by my physician has having Alzheimner’s, which was devastating to me. A neurologist after seeing the results of extensive tests, told me I had Dementia.
I continue to I have good days when I accomplish several tasks without any problems.
Other days when I am confused. I go on walk with my wife. A day when going to the movies will cause me very confused because I don’t understand what i see or hear. Is a mass of confusion.
Knowing that, I experience more peace and confidence towards my illness. I also to a weekly support group.

This was heartwarming to read. I run two creative clay groups for people who live with dementia in Derbyshire and this reflects what we find. With adjustments people with dementia can lead meaningful and fulfilling lives, and contribute to society. Our group is for carers too, and we all benefit from getting together and doing something that furthers all our understanding of dementia.

Everyone does at the beginning stuart berry that’s the whole point of the show there’s a beginning stage a middle stage and a late stage , there can be many years in between these stages

Obviously the people taking part in the experiment retain enough memory to communicate and do simple tasks. I wonder what percentage of dementia sufferers have that capability.