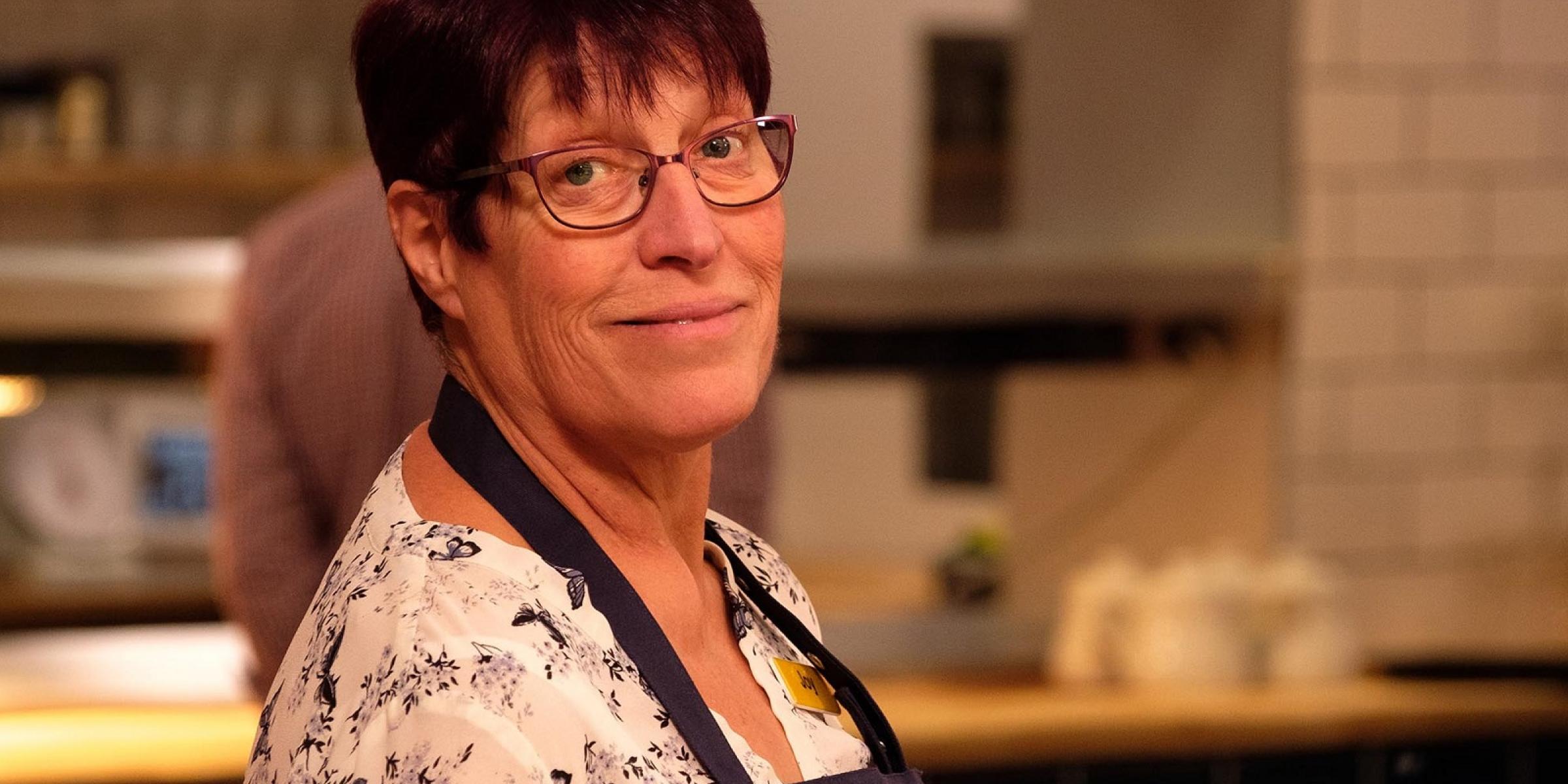 Real stories
Joy’s story: ‘The restaurant has given a voice to those of us affected by dementia’
Blog

Diagnosed with young-onset Alzheimer’s disease aged 55, we hear from Alzheimer’s Society Ambassador Dr Joy Watson as she takes on a new challenge; working front of house at The Restaurant That Makes Mistakes.

When I was first asked if I wanted to be part of a TV programme about dementia, I jumped at the chance. But as it dawned on me what was expected, I didn’t know if I had made the right decision.

I’ve always worked in care and nursing professions – my most memorable times were those spent with people who needed help.  I was also part of a search and rescue team and finding missing people was always so rewarding.

My biggest fear was that I wouldn’t be able to work in a restaurant situation. Although it was called The Restaurant That Makes Mistakes, I didn’t feel very confident.

I had no need to worry, we were given training. I did try working in the kitchen, but that was a disaster – dropping plates and cutlery only fed my anxiety. Plus, I couldn’t cope with the noise created by all the different machines.

But I wasn’t about to throw in the towel, or in this case the linen napkin.

Assigned to front of house duties, I found my niche, and was even promoted to head of house. It didn’t seem to matter that every morning I would have to be shown how to fold the napkins and lay the tables. By the end of the week I’d got the hang of it, only to find that after a weekend break from filming, I had to learn everything all over again.

Oh, and I did still drop things, sometimes into the lap of a visiting celebrity. But the dementia came to my rescue as I didn’t recognise any of the so-called important people, so I was spared any embarrassment.

‘Everyone can make mistakes’

Although I struggled at times, it was the most enjoyable experience I have had in ages. The best bit being the fun and camaraderie I had with the other volunteers, producers and crew. Living with dementia, I have good days and bad days and whenever I was struggling to do something in the restaurant people were so supportive.

'It made me realise that everyone can make mistakes in this kind of work, but as long as people are kind and understanding, it’s fine!'

Working at a restaurant when you have vascular dementia 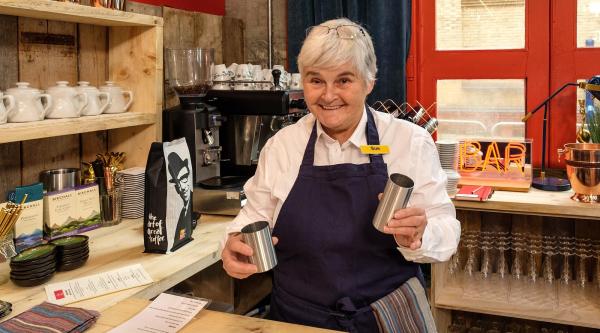 Real stories
Sue Strachan’s myth-busting mission began when she was diagnosed with vascular dementia in 2014. She wants The Restaurant That Makes Mistakes to give hope to others facing a dementia diagnosis.
9

I did suggest we had a board of photos telling us who was who, as I couldn’t remember from one day to the next who the crew were. I negotiated a few changes that helped us to enjoy what we were doing without too much stress.

I felt I learned an awful lot about people, interacting with people of varying ages and who were living with different types of dementia. It was an eye opener to realise how other people managed, and that I wasn’t the only one to have bad days. I gained a lot of self-worth from the social times.

This project has given a voice to those of us affected by dementia. More importantly it gives the audience an insight into aspects of dementia that they may not have been aware of. OK, so not everyone with dementia can go out and get a job or do voluntary work, but hopefully, people will see that with support, there are worthwhile things to engage with.

A diagnosis of dementia is not the end of the road, it’s a different journey. If work places can be better informed and embrace us, it would make the world a better place.  We could continue to feel useful and valued, and in turn enrich the work environment.

My motto is ‘Don’t forget the ME in DEMENTIA’.

Work and employment
Back to top

It was dreadful how joy was attacked at Bracy Bridge

Watched this from start, Took note of the people state, I have noticed the change in ALL of them, Some more than others, BUT A change in ALL.
In my mind this could be carried over to other illness, I had TWO very Bad Heamorages, BUT both times I came back fighting, for all I could not speak correctly, found could not spell any more properly and maths went out the window for all I used them all the time as a builder.
So I feel for these people, and understand even if for a bit of a Differant reason.
ONE thing I do remember and it has stuck with me all my life even later when I was in charge of people 20 years after my illness, Which was not what program was about, but memory and Brain problems, plus test are nearly the same when checking if brain can HOLD memory, long or Short.
Trouble is people even in our own families do not give and take with my illness or as I see in Alzheimer's.
My wife's mam slowly went into it, WE all knew what was happening, but we had a fight with Docs, As when they done tests she seemed to be alright.
But we had to take out main fuses on cooker because of how bad she was.
I had a good job so could keep an eye on her when I should have been at work,
But it took its toil on me and I was on sick forn6 month,
Took me ages to get through to my wife and her daughter that her mam should be in a home.
Only ended up in a home because she was reported walking around were she lived with no clothes on. Plus she was found miles away by police on her mobile scooter, which I took off her after that.
But funny thing, One day she was 100 percent great, next day far gone,
We had keys outside, but many times I had to climb through open windows as she had bolts in.
I nearly had enough trying to keep wife safe,
I had hot water thrown over me and spat on and all sorts.
Even hot soup, But it was not HER, it was her other self.

It is interesting to see how each of the volunteers find their own strengths and weaknesses in the Cafe environment. There is a lot of support and encouragement shown in the group. Would they be able to provide this sort of service if they were at a later stage of Dementia or Alzheimer's? When is a person with this disease actually deemed unfit to work? I understand the dignity and respect they must be shown in the workplace and look forward to the next edition.

I am 75 and have had Alzheimer's Disease for about 4 years. I very much admire what Dr Joy Watson is doing, because my AD has made me shy about large groups and people I don't know. I don't like online contacts either, partly because there is too much weeping and wailing, and a lot of assertions without much evidence... You can see that I am very picky! But Joy is going out there and allowing the cameras to watch, which helps to 'normalise' dementia, and gives people like me an inspiring example of what we all should be doing!

Thank you Joy for your terrific example!

Excellent article! I too have dementia and find being open to others about my diagnosis and keeping busy helps. I am far busier than a lot of my contemporaries. Looking forward to watching the programme tonight.

I really like this article as it reminds of something I could do and I worked in caring environment for years and I was like Sue. I need to read more about speaking, as I have problems with speaking and find it very difficult to explain what I mean.