Information
Impossible cost: Dementia care bill would take 125 years to save for
Blog

Unite with us and call on the next government to fix dementia care now, for people affected by dementia today and for all of us who could be in the future.

You’ve saved your entire life for your pension. You put away funds every month with dreams of an early retirement, going travelling or relocating to a farm in the countryside. But then you develop dementia.

Instead of spending your carefully saved pension on the retirement of your hopes and dreams, or using it to support your family, you are left with no choice but to pay £1,000 per week for a place at a care home.

In fact, even if you had anticipated this alternative future, our investigation has revealed that it would take 125 years to save for the typical person’s dementia social care bill – more than a lifetime.

In a series of videos we confronted the public with this alternative future.

Their genuine shock shows that spending all they’ve saved for on care costs is not something people even consider as part of their future, despite one person developing dementia in the UK every three minutes.

Dementia is a health condition caused by diseases in the brain. Yet unlike cancer or heart disease, dementia cannot be cured or effectively treated. The only support available is help to meet people’s basic daily needs, such as washing, dressing and eating. So instead of support and treatment offered for free through the NHS, people with dementia are dependent on costly social care.

Surprisingly few people are aware that dementia care is often not funded by the state. More still have no concept of the weekly cost of a care home place. Yet even if you did know, and started to save for your care today, you would still have no prospect of covering the typical bill.

Converse to the growing number of people developing dementia, since 2009 there has been an estimated £4.6 billion cut to the social care sector. These slashed budgets yield stretched services, cut corners and avoidable mistakes that leave people with dementia neglected and suffering.

On top of this, the shortfalls in funding by successive governments have left people affected by dementia and their families plugging the gaps.

Joan, whose parents both live in a £2,000/week care home, is terrified of the future. She’s calculated that all of her parents’ savings combined with the sale of their bungalow will only pay for another four and a half years of care. The situation is unthinkable for her and her husband, who are both retired and live solely off their pension.

No one should be forced to decide between supporting their parents and funding day-to-day life for themselves. 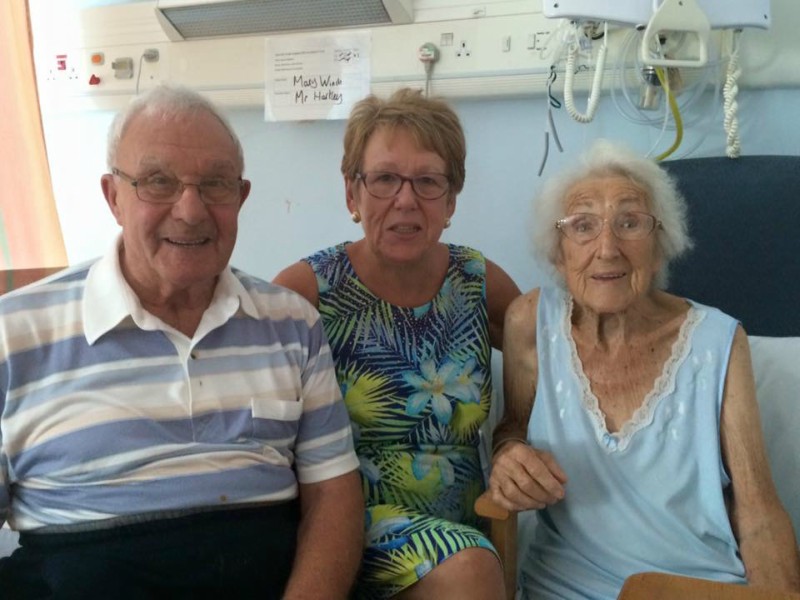 Joan with her parents, Mary and Leonard The social care crisis is a dementia crisis. With such a huge proportion of people with dementia dependent on social care, we urgently need a solution to ensure that everyone gets the right support when they need it.

Currently, many people with dementia feel deserted by the state, and must rely on family members and carers for the support they need.

Too many people like Joan are forced to give everything they own to care for a loved one. It’s vital that the next Government creates a long term, sustainable system for funding dementia care.

Unite with us and call on the next government to fix care now, for people affected by dementia today and for all of us who could be in the future.

I know several people who would be very pleased with a cap of £100,000 as they have paid out far more for their parents or spouse. I don't know why that idea was scrapped. Most of those who own their homes in the SE have houses worth much more than that.
To some extent I accept that it is a medical condition and should be paid as, say, cancer is. But this could only be done with a massive tax hike on younger people who are already struggling to own their own homes, pay for childcare etc. It is simply no good saying "tax the wealthy" because they leave the country once the tax rate gets too high - and then the Govt gets no money from them. My son, who earns quite a good salary, worked very hard for a bonus which was taxed and NI'd at nearly 50%.
If we could make businesses like amazon pay a fair rate, it would help but I don't think that's possible. Other businesses would be very hard hit by tax rises, and so would the pensioners who depend on dividends from them, any savings getting derisory rates of interest. Such businesses might go under or move elsewhere, with the same dire effect on the Treasury.
We have to accept that this contry no longer manufactures things the world wants, which is about the only way to have enough money to pay for social care, free education, NHS etc. I would like to pass on what my house is worth etc but if I am unfortunate enough to get dementia I will expect to pay for my care. Actually I would prefer someone to quietly put me to sleep forever, but I doubt that will ever be allowed. I cannot understand why we cannot leave a will saying "When I no longer know who I am on what is judged by three doctors as a permanent basis, I would like to be painlessly euthanised". But I don't expect anyone else agrees.

My Nan who had Alzheimers, went into hospital with dehydration. She stayed in hospital for four months, as she was unable to go back home due to the care she needed, and there were no spaces available in a care home for her. However, a space did become available, but unfortunately my Nan died the Sunday before she was due to move to the care home. My Nan died in hospital on the ward, with just the curtain around her and the family for privacy, as there was no private room available.
The NHS and Social Care funding really does need to become a priority for the next Government. Life expectancy is getting longer, so the funding needed for care in older age is only going to increase - something needs to change now to enable our elderly loved ones to have the care they deserve.

My mother has Alzheimer's and is now in a nursing home. I had my own business which I had to closed down as I was told someone had to be with my Mum 24 hours a day as it was not safe for her to be on her own, which I did very willingly as I love her to bits. I looked after her in her own home until I could no longer meet her needs. Her nurse told me there would come a point when I would need to put her into a home. I had no other choice but to put her in a nursing home as she would not eat, drink or wash. I contacted the local council and was told in their words that 'I was on my own' and they could not help with the cost of her care. My Mum has already paid over £150,000 for her care. I had to sell her house, which she and my dad worked very hard for, for many, many years to pay for so it could be an inheritance for their grandchildren. Now the money is running out, I have contacted her care home for advice and they have said that they have no advice to give me. Both my parents worked all of their adult lives and paid their taxes. It's absolutely shocking and disgusting that the NHS is put under such strain and that there is no free NHS dementia care for ALL who need it. It's not about being old it's a disease that affects the brain and the people who suffer with it need professional expert care by people who have been fully trained in managing the condition. I cannot afford the care my Mum needs and deserves and I just don't know what I am going to do. I overheard another daughter who was almost in tears at the home saying to her mother that she is suffering with depression because she just does not know how she is going to cope as all of her Mum's money is running out and she just doesn't know what to do. This current system or lack of one is not working and is not fair on anyone involved.

When you get to around £30,000 left in savings you contact Social Services - you are allowed to keep £23,000 - your mum will stay where she is I am pretty sure and the council will pay for the shortfall. Self funders always pay more for their care than non - funders. Again pretty unfair.

I agree, Christine, with all you wrote. The whole situation is so unfair and depressing.
I feel incredibly sorry for my two children and five grandchildren because a lot of their inheritance went on care for my husband who had Alzheimer's for nine years, two of them in a nursing home. If I need care as well one day they will be left with nothing, and probably debts as well. What can we do about this huge crisis? Why won't the government at least put a cap on the maximum amount anyone will have to pay so families can have a chance to plan financially for the future? Why was this scraped?

I cannot understand why with the rising cost of housing any government hasn't altered the assessment from £100.000. There cannot be many places across the country where property can be bought for under this amount, unless it's in serious need of work.
What is more worrying is what is going to happen to people such as my mum who doesn't own her own house or my husband and I who also don't own a property, we live in a tied house! Thank God none of us is showing any sign of dementia.
The other side of the issue is families having an expectation of inheritance. Surely owning a property is like having an insurance policy, that can be cashed when needed. If it's needed to pay for care all well and good, so very sorry family there's nothing left for you, you'll have to make your own way in the world.

If you don't own a house or have no savings you will be cared for in a home free of charge , which is why I have no desire to save money for my old age. My parents worked and saved and now it is all going on their dementia care. I don't begrudge this but it seems very unfair.