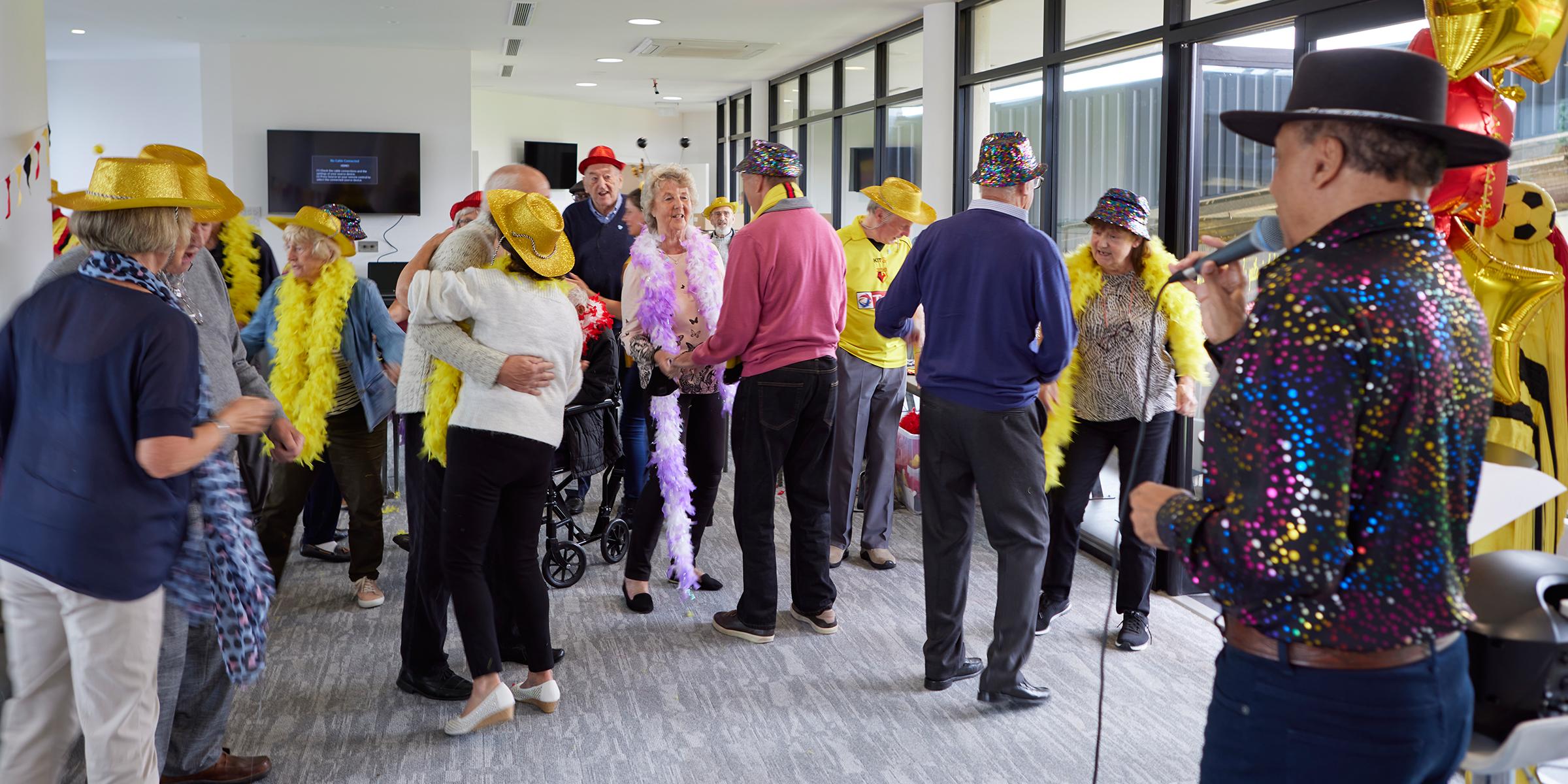 Watford Football Club’s reminiscence programme takes people with dementia on a journey through the decades and it’s become a lifeline for those involved.

Based in the Sensory Room at the club’s Vicarage Road stadium, the sessions take people with dementia – known as ‘guests’ – and their carers on a stimulating, entertaining and engaging journey through the decades.

The twice-weekly programme is run by the club’s Community Sports and Education Trust, with support from Watford Museum, and funded by the Premier League and Professional Footballers’ Association.

The popular sessions have featured Watford FC memorabilia and guest speakers, including former players such as club legend Luther Blissett.

‘Often people with dementia feel very vulnerable, they feel forgotten, they feel lost. Whereas coming here, they can feel part of something special,’ says Hannah Foster, who set up and ran the group for two-and-a-half years as the trust’s Project Officer for Older Adults.

The sessions offer exercise and recreate the excitement of attending a live match, while improving guests’ social, emotional and physical wellbeing. The programme is supported by volunteers – who are all Dementia Friends – including Rita Taylor, wife of the late Graham Taylor, Watford’s most successful manager.

‘It’s one big family event, in terms of our volunteers, our staff, the carers, the guests. We all work together to create a family and support network,’ says Hannah.

The activities handbook: Supporting someone with dementia to stay active and involved

This handbook is for anyone who is caring for a person with dementia. It will help you suggest enjoyable and engaging activities for the person you’re caring for.

Among the group’s guests are Walter Lees, who has dementia, and his partner June Casey. Walter played over 200 games for Watford in the 1960s and 70s, helping the club win the Third Division in 1969.

‘Golden Memories is a lifeline to people with dementia and their carers,’ June told the Premier League.

‘It’s somewhere to go and socialise. Walter has got to know people and he’s just brighter.

‘We end up dancing and singing, and you go home feeling, “Well that was good! I’ve got another one to look forward to next week.” For Walter, it’s the centre of his life.’

Walter is full of praise for Golden Memories and those who run the group.

‘If it wasn’t for Hannah and the team, I would be stuck in the house. I don’t know if they realise the goodness they’re doing for people in our situation,’ he says.

Another guest, Bryan Hedley, is a long-time Watford fan who is now living with dementia.

‘My first game my uncle brought me to was in 1939, and war broke out the next day, so football was cancelled from then on,’ he recalls.

Having initially been unsure what to expect, Bryan has really enjoyed the sessions.

‘I must admit, I didn’t know what it was going to be like, and I’ve come and it’s great,’ he says.

‘It’s great to be able to talk to people and see people regularly. And we’ve got such a nice group here, that it’s so friendly. I look forward to Tuesdays – I had to get up quite early this morning to get organised!

‘It’s just the ideal place to come and meet people you want to see.’

The group had to stop meeting face-to-face during the pandemic, but staff and volunteers stayed in touch with guests via regular phone calls and garden visits, when permitted.

‘They were ringing up regularly, different people, to ask how you are. They stayed on a long while,’ says Bryan.

These included a booklet called Journey through the decades, 3,000 copies of which went to Golden Memories guests, older Watford fans and local care homes.

Care home residents were also invited to live entertainment shows over Zoom, which expanded to 45 homes as far as Belfast and Edinburgh, through the involvement of the Salvation Army.

Hannah and her team have worked closely with Alzheimer’s Society, which led to Society Ambassador Sir Geoff Hurst recording a Christmas message for one of the Zoom shows. Hannah and Luther Blissett also supported Watford Memory Walk last year.

The trust and the Society are both partners of Dementia Friendly Watford. This is an initiative from Watford Borough Council to make life easier for local people affected by dementia.

‘It’s just so important that we reach out within our towns, within our cities, to people living with dementia,’ says Hannah, who is now Dementia Project Manager at the council.

She is also supportive of the Society’s Sport United Against Dementia campaign, which is raising funds and awareness to improve the lives of current and former sportspeople, staff and fans who are affected by dementia.

‘Alzheimer’s Society is a wonderful charity and I think it’s incredible that the Premier League has decided to work with them on the campaign,’ says Hannah. ‘It’s just a wonderful, wonderful partnership.’

Use our directory to find dementia support near you.