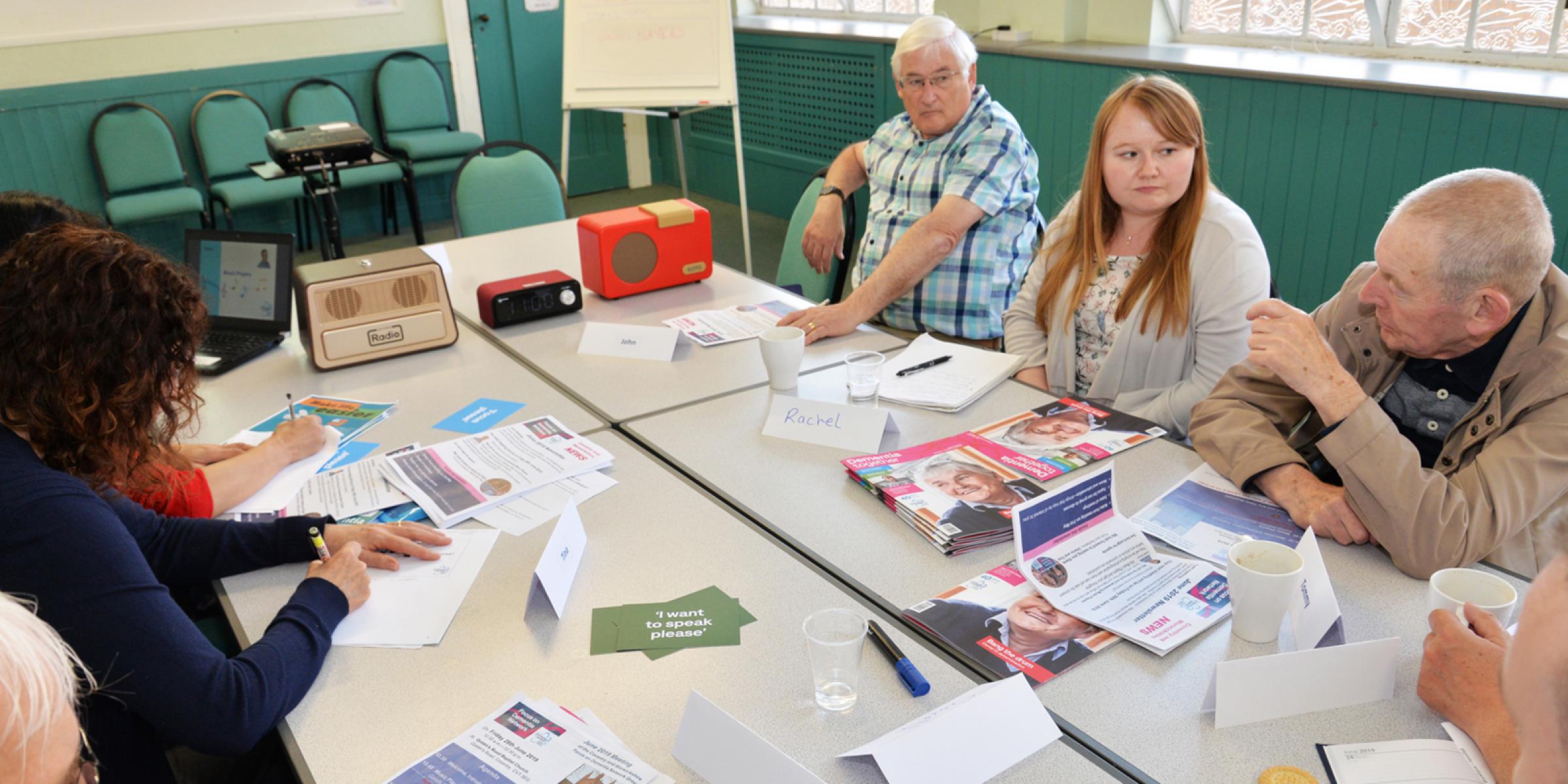 People with dementia in Coventry offer their thoughts and feedback on three devices that play music and radio.

On the last Friday of every month, Coventry and Warwickshire’s Focus on Dementia Network group – made up of people with dementia – meets to have a say on local and national issues.

Facilitators Sharon and Tina kindly invited us along to hear the group’s opinions about radios and music players designed for people with dementia.

First, the group looked at the One button radio, a retro-style AM/ FM analogue radio. You can set the station and volume by lifting a magnetic panel, which is then replaced so the more complex controls are out of sight. This means that someone can turn the device on or off simply by using the single button on the outside.

Noel found the retro style a bit too convincing, initially thinking it was an old style radio with music to match. ‘You instinctively think it’s going to be music from a long time ago,’ he said.

Tommy tried setting the radio before turning it on, and found it straightforward enough to use. ‘The thinking behind it is quite clear,’ he said.

Dave liked the idea of the panel covering up the station and volume controls.

‘That would be easier for me – then it’s set and you’ve got what you want,’ he said. ‘The panel hides the difficulty.’

John, who found the radio a bit big, wondered if the panel could be attached with velcro so it would be easier to use if someone wanted to adjust the controls beneath it.

Dave’s main concern involved the two plastic knobs that need to be placed on the station and volume controls to allow them to be altered. There is a different knob for each control and they aren’t interchangeable, which he thought could be a problem if he had to set them himself.

‘I think I’d get confused and maybe end up damaging it,’ said Dave.

Home phones: People with dementia try out some landline phones 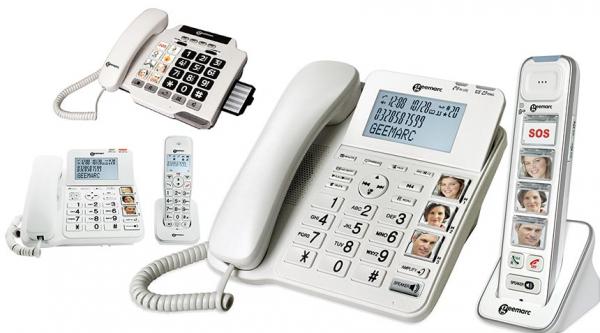 Real stories
People affected by dementia in Kent look at specially designed landline phones to see if they could be easier to use.
12

Next up was the Simple Music Player, which can play songs loaded via a USB cable. The music can then be played by lifting the lid and stopped by closing it, while pressing the button beneath the lid skips to the next track.

Dave liked the look of the device, while both Tommy and John praised the on-off lid.

‘You just move it to the next song – that’s quite good,’ added John, who again thought the player was a bit large. To change the volume, the music player’s instructions suggest that someone can push a pencil into one of two holes on the underside of the machine.

‘You just move it to the next song – that’s quite good,’ said John.

Tommy didn’t like the idea of having to do this, though he acknowledged that a carer could probably do this to set the volume overall.

Dave suggested having some pre-set volume levels on a small number of buttons. ‘You could have something simple like one to four,’ he said.

John wondered why the volume control couldn’t be in a more accessible position.

‘Why hide it away if the people with dementia aren’t going to be using it anyway?’ he said.

Time and place: People with dementia try out a clock and a locator device 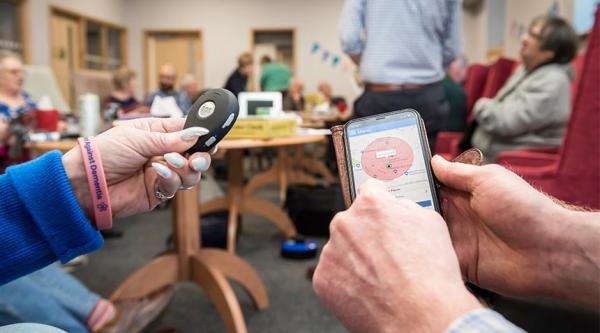 Real stories
A group of people with dementia in Cambridgeshire look at new products being developed to help keep track of when it is and where you are.
4

The final product for feedback was the new Simple MP3 Music Player.

Tommy was immediately impressed. ‘This one looks ideal,’ he said. ‘It’s more modern and up to date.’

Songs can be loaded onto the device via USB, though this didn’t appeal to everyone.

‘It’s more modern and up to date,’ said Tommy.

Dave, who felt that the storage space of 8GB was a good amount for music, said that he uses USBs quite frequently. However, John and Tommy said they wouldn’t know how to use one.

An arrow button on top of the device moves the player on to the next track, though Tommy initially tried to slide rather than press this.

‘It could have a “go back a track” button, but that would obviously complicate it more,’ added John.

The product has some smaller controls on the back – including the option to make the songs play in a random order – some of which Tommy found confusing.

It was noted that this may have been more straightforward with an instruction leaflet, which wasn’t available at the time.

John felt that all three players were expensive when other products, including voice-operated technology like Amazon Alexa, could offer more at a similar or cheaper price. However, the group also agreed that a person’s needs and preferences would vary a lot.

‘There’s not a blanket solution for everyone, because dementia is so broad,’ concluded John.

These music and radio players – along with a range of other helpful products and gifts – are available from our online shop.

Prices without VAT (you don’t have to pay VAT if it’s bought to be used by a person with dementia or other condition) – prices correct as of August 2019.

Music and Singing, Equipment and Technology
Back to top