Research partially funded by Alzheimer’s Society’s Drug Discovery programme has made important progress in the search for new treatments for dementia. 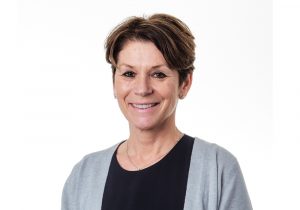 Research published today (April 20) and partially funded by Alzheimer’s Society’s Drug Discovery programme has made important progress in the search for new treatments for dementia. The research was led by Professor Giovanna Mallucci at the University of Cambridge. Here we chat with Professor Mallucci about what her team has discovered.

Alzheimer’s disease and other degenerative brain diseases are characterised by the presence of misfolded proteins in the brain. These proteins are thought to have toxic effects on brain cells, but exactly how they contribute to dementia still remains a mystery.

To find answers, Professor Giovanna Mallucci has been investigating a process that happens in cells called the ‘unfolded protein response’.

“This is a natural part of the cell’s defences that detects when proteins are misfolded, which causes them to malfunction and build up, ‘blocking’ the system,” she says.

“The response suspends much protein-making activity in the cell while it fixes the problem. If it can’t be fixed, the cell will die.”

Research has shown that elements of the unfolded protein response are highly activated in the brains of people with Alzheimer’s and Parkinson’s as well as in frontotemporal dementia.

In mice with neurodegenerative disorders, the over-activation of this response leads to memory problems and eventually brain cell death. Blocking the response in mice protects them from brain degeneration, leading Professor Mallucci’s team to try to do the same in people.

“If we can find a way to block this response with drugs, then we might be able to develop a treatment that works for people with all these different conditions.”

An innovative approach to drug discovery

Professor Mallucci’s research first hit the headlines back in 2013, when her group discovered a chemical that could switch off a particular branch of the unfolded protein response in mice that had prion disease.

Prions are toxic misfolded proteins that are the cause of Creutzfeldt-Jakob disease (CJD) and are a useful model in which to study neurodegeneration.

“The chemical we gave to our mice was able to prevent the prions from killing brain cells by targeting this response. This was incredibly exciting because it was the first time this had ever been seen: the mice were cured of a lethal degenerative brain disease,” explains Professor Mallucci.

Dementia research experts responded positively to the news, saying that it could well be a ‘turning point’ in our search for effective treatments. But they were cautious too.

The research was initially only in mice with prion disease, so there remained many questions about whether it would work in a similar way in people or in other neurodegenerative conditions like Alzheimer’s disease. A key concern was side effects.

“The chemical we used was toxic to the pancreas and so it was not suitable to be developed into a drug,” Professor Mallucci says.

“So we set out to find alternative drugs that that had the same effect on the unfolded protein response but didn’t have toxic side effects.”

Borrowing from other health conditions

In partnership with the Alzheimer’s Drug Discovery Foundation, we fund researchers to test whether drugs that are already being used for other health conditions can also be useful in the treatment of dementia.

“We screened through over 1000 different compounds in the lab to find ones that could block the unfolded protein response and found two promising drug candidates,” explains Professor Mallucci. One, trazodone, is an already-licensed drug used as an antidepressant. The other, called DBM, is a compound found in small quantities in liquorice and is also being tested a potential drug for cancer. It also bears some similarity to curcumin, which has previously been investigated as a potential way to treat or prevent Alzheimer’s.

Both drugs were tested in mice that had prion-related diseases, to see if they had the same effect as the original chemical. Not only did they target the right pathway in cells, but they protected brain cells from dying and the mice showed improvements in disease-related behaviour. Importantly, these drugs did not damage the pancreas.

Next, the researchers tested the drugs on mice that developed frontotemporal dementia. They were particularly looking at how the drug affected the protein tau, which forms toxic clumps in several forms of dementia, including Alzheimer’s disease. They found that the drugs were also able to prevent the death of brain cells in these mice. The mice also had an improved performance in memory tests.

Before you start overdosing on liquorice, it is worth bearing in mind that there we now need to understand whether these drugs will be effective for people in with Alzheimer’s disease or other forms of dementia.

The findings are an important step forward but the research has so far only been done in animals. The next steps are for these drugs to be tested in animal models of Alzheimer’s disease – something that we are currently funding Professor Mallucci to do - but critically, to begin testing the licenced drug in people with different types of dementia in the earlier stages of disease.

“A clinical trial is now possible, to test whether the protective effects of the drug we see on brain cells in mice with neurodegeneration also applies to people in the early stages of Alzheimer’s disease or other dementias,” says Professor Mallucci.

“We could know in 2-3 years whether this approach can slow down disease progression, which would be a very exciting first step in treating these disorders.”

On the same day that these results are published, we are also announcing that Professor Mallucci has been appointed as one of five associate directors to run centres within the UK Dementia Research Institute (UK DRI).

Back in December, we announced that Professor Bart De Strooper would lead the UK Dementia Research Institute as director from University College London.

UK DRI at University of Cambridge will be led by Professor Mallucci and will focus on the processes involved in the earliest stages of neurodegenerative disease. The team will place a strong emphasis on identifying molecular targets that can be rapidly translated into new dementia treatments for people in the early stages of the condition.

Dementia Research Institute
Back to top

Please, Please can my husband be one of the people to go on these trials. I think people with early on-set Alzheimers should be allowed to take that risk. My husband is only 49 years old. What is there to lose? and everything to maybe gain.

Hello Mrs Lynes. There is a service called Join Dementia Research that helps people to take part in suitable dementia research studies and drug trials. When you sign up, you can put in some details and the service will find out whether there are any studies that are suitable for you or your husband to take part in. You can register on behalf of someone with dementia if it is in their best interests.

If you’d like to talk more about the service, please call our helpline on 0300 222 11 22 and you can arrange a phone call with one of trained Join Dementia Research advisors who can tell you more about the service. You can also find out more information at www.joindementiaresearch.org.uk. We hope this is helpful.

My mom lives with me and has an Alzheimer's disease for about 8 years now. Her body is healthy but she has almost no speech, is pretty much always confused, sleeps most of the day away, is incontinent and requires constant care. The saving grace in all this is that her personality has not changed. She does get frustrated but mostly she has stayed her own sweet self. It is exhausting caring for her and working, and expensive but necessary to have help. I'm trying to keep her at home but I don't know how long this will go on and her needs are increasing almost daily. She will be 90 in a few she was adjusting to the medications Donepezil (Aricept), but they make her feel sick also. she had problems recognizing other family members and friends. or getting dressed..

Here’s why research will beat dementia - Alzheimer&#039;s So

[…] funded by Alzheimer’s Society has discovered promising avenues for new treatments, it has shown that specialised brain training games can improve memory and thinking in people over […]

What about the incidence of orthostatic hypotension seen with trazodone? The last thing these patients need is to fall and suffer consequences of that.

Can trazodone be prescribed now, how would you approach the doctor to do this, if people are in later stages of dimentia/Alzheimer's

Hi Robert, Tradozone is currently prescribed for depression but we don’t yet know enough about whether it would be effective for people with dementia. This approach is more likely to work for people in the early stages of the condition and we won’t know whether it is effective for a few years. If you need advice or help for someone living in the advanced stages of dementia, please call our helpline on 0300 222 11 22

So why not try with patients who are in late stages, what have they got lose nothing, why do you have to wait a couple of years, why build people's hopes up with grabbing headlines.
Maybe all the money coming in is to much to give up, so no cure will ever be found, just the ever growing carrot.

Like what I read. It's exciting and promising and well worth researches. With so many institutes and brilliant staff and professionals working towards finding treatment for dementia, I am sure that something wonderful will be discovered soon. I am watching the space eagerly.