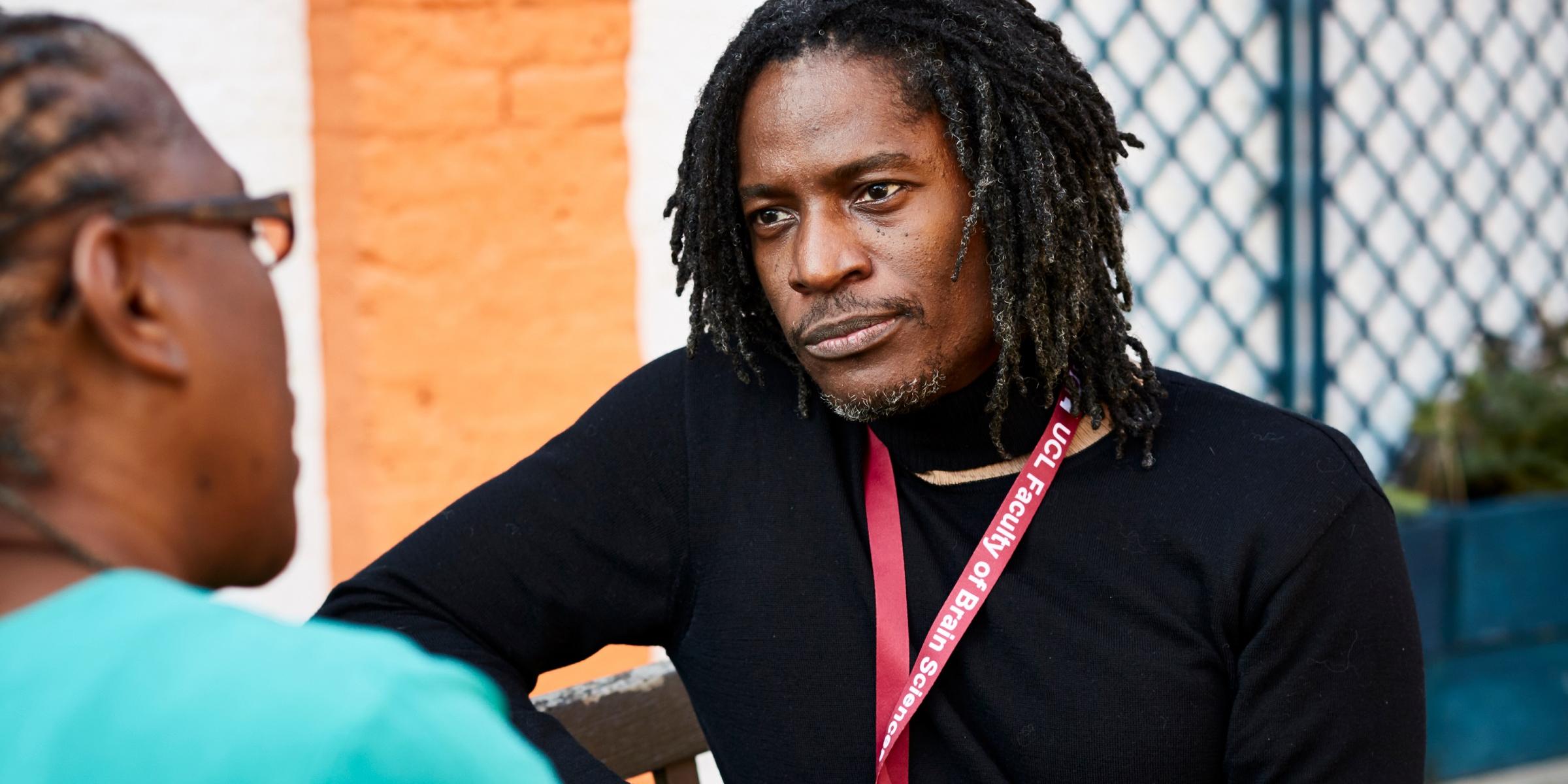 For Black communities in the UK there is a greater risk of dementia, but support is typically accessed later in the journey. Alzheimer's Society is funding researcher Moïse Roche to understand the cultural factors behind these statistics, and how dementia services can meet the needs of Black African and Black Caribbean people.

Moïse Roche grew up in Guadeloupe, before moving to the UK in 1993. He worked in tourism, then IT, before returning to higher education where his interest in dementia began.

Studying Psychology at City University, Moïse wrote his final year dissertation about memory. This set him on a path to learning more about dementia and, later, its relationship to ethnicity.

After completing his degree, Moïse started volunteering with Alzheimer's Society in 2013. He worked as a dementia adviser and as a community engagement officer.

Alzheimer's Society is funding his latest research project, which seeks to understand how dementia services can better meet the needs of Black African and Black Caribbean people.

This sorely under-researched area is especially important given the facts:

3 key facts about dementia for Black African and Black Caribbean people in the UK:

While working with Alzheimer's Society in the culturally diverse boroughs of Lambeth and Wandsworth, Moïse soon noticed these worrying patterns of who wasn't accessing dementia support. 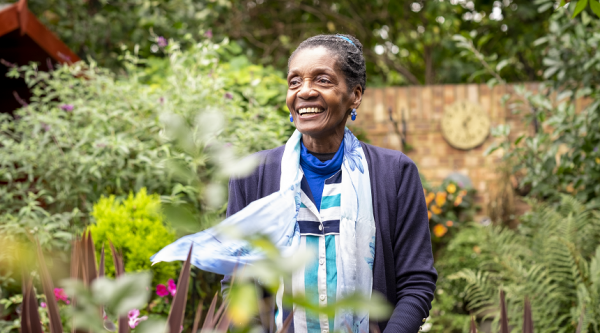 Real stories
Community leader Morcea Walker talks to us about the specific challenges of dementia in the Black community and her passion for raising awareness.
3

‘What became strikingly apparent at the time was an almost complete invisibility of people from Black backgrounds (African, Caribbean, and other Black) and South Asians making use of the service and support available.'

‘I was also surprised to see nearly no illustration or people representing these populations in (or on the cover) of the printed materials available at the Society. I remember raising the question with the managers at the two offices where I volunteered.’

Moïse also found that existing dementia research often misrepresented people in Black communities as unwilling or failing to engage with dementia services. But, in his research, Moïse found that was not necessarily the case, and that services were equally likely to fail Black communities in how they presented, structured and delivered services.

His research is about understanding how these communities perceive and react to dementia, so that dementia support can become more culturally informed, diverse and inclusive.

One obstacle to understanding the relationship between ethnicity and dementia is a lack of good data. Much of the existing research has tended to group B.A.M.E populations together and compare them to White populations. But B.A.M.E populations are very diverse and cannot be grouped or treated as one. This makes it impossible to extract robust conclusions from data.

For a better understanding, Moïse has interviewed Black African and Black Caribbean people living with dementia, their carers, clinicians, care home staff and other people involved in dementia care in Black communities. These conversations will bring context to the existing data:

‘Black communities are often reported to hold misconception, poor knowledge and inappropriate beliefs about dementia, as well as being less likely to participate in research or engage with services.'

‘It is evident that the lack of knowledge so often reported in the literature does not show in the group of participants I have interviewed. There are a number of themes that emerge from the data around reciprocity and expectation of care, as well as questions around identity, integration in a foreign place and much more.

'I hope this research will highlight the need to reconsider the current narrative about dementia and ethnicity; but more importantly, improve experiences and outcomes for Black families living with dementia.'

Moïse is in the process of analysing the data, so it’s unclear at this stage what direction his conclusions will take. But the picture appears more complex than dominant narratives suggest.

With so much research being investigative and exploratory in nature, Moïse also recognises the need for work that is intervention-based.

In light of the Black Lives Matter movement, and the news that Black, Asian and other Minority Ethnic groups have been at a greater risk of death from COVID-19, this has never felt more urgent.

‘In light of current social climate, I am inclined to say that any intervention will need to be all encompassing and include much wider context,' says Moïse.

'My personal feeling has always been that when services are developed, they should take into consideration the whole population of the country, and acknowledge its diversity.

'At present, services, support and treatments are created and tested, by – for – and with the White majority population. Then, later, they are reframed and adapted for other communities.

'This approach is ineffective, costly and divisive as it dismisses a large portion of the population. There should be requirements from funding bodies, organisations and Government that services, support, interventions, and so on are developed for and with a proportionate representation of the entire population of the country.'

Alzheimer’s Society funds research into the cause, cure, care and prevention of dementia. If you're able to, please donate to support our work.

Quite an interesting topic and encouraging area to look into. Great work you are doing man and will like to know more about this verse field of human brain . I have being long in care business and venturing into dementia holistically would be quite interesting. More work need doing into dementia by involving everyone as we are all connected one way or the other.

Really pleased to learn that useful relevant research is being undertaken into the effects of this awful disease. One cap does not fit all.
I hope appropriate actions will be taken when the report concludes.

Very interesting article, let's hope some good will come out of it.

Its great to see this, the article is informative. Some years ago i was so broken about the lack of support. Then i became a dementia champion to help change the narrative . I was unable to put in the time in which I wanted to, but still held a vision to complete a community film around this subject. when carried out research, interviews etc. It would be great to hear from Moise Roche and see how we can support to change this narrative. Sadly my mother died 10 weeks ago, Mom had vascular dementia. so it has given me focus and a propose to support others, more than ever.

I'm glad that Moïse has been given an opportunity to address the problem that Black communities have been living with for a number of years yet, no researcher really took time to investigate 'why?' these communities fail to access available services until it's too late. These communities are predominantly working as frontline staff and figures show that they're more likely to die from COVID-19 at the moment.

so agree that Moise's work long overdue... so he should get all the support he needs to see this through. Wonder if all the fieldwork was pre-lockdown.

Great article highlighting the shortcomings of stereotyping any condition and designing the services only around the majority.... whoever they might be. Feel there could be synergy to work with researchers looking at other conditions where the 'norm' is generalised e.g. lung cancer and in no way representative of other patients who have never smoked, are well educated, of different cultures, don't fit in the 'deprivation' category, younger etc. Stereotyping and generalising what are often very diverse and heterogenous populations has dominated healthcare services for too long - leaving too many outside 'the norm' and for whom services then may be not accessed or even inappropriate. keep up the good work.

The reading of this report was very insiteful , I have also had a battle too be understood on the behalf of my mother , which took a very long time to be Diagnose as she continuelly had urine infections for years . I feel a continued infection should not be ignored as I feel this is the start of dementia and treatment started , after 4yrs it was deemed mum could have dementia ,which she had vascular dementia No treatment . We have a wonderful DR who has tried too get us taped into various services we win some and No help from others

This is refreshing to read and really important research for helping to understand people's different experiences and needs - looking forward to hearing more about it in future.

I am a dementia advisor working in very diverse borough and have seen how voiceless and unrepresented the community is in the area of research and direct support.
I am therefore pleased that funding is going into this area which has been neglected for far too long.

Really interesting article.. as a career to my mother from the Caribbean i felt alienated at times trying to find a residential home which could cater for my mother and respect her heritage. A key observation regarding residential homes for me was we talk a lot about memories and how they evoke happy times but there is still a tendency to cater to the masses (Non-BAME) and not the niche...

It is good to know that funding has been given for this important area of research. As a dementia adviser from the BAME community, I hope this will lead to positive change led by actions and not just words.

About time this was addressed. Look forward to hearing more about research

I have worked with people who as dementia and and other illnesses also done the training around this brain disease my view on this disease is that I don't think that black people are more likely to suffer with dementia/ Alzheimer's. Than a white people I think it effects you no matter what colour you are when I use to work in dementia care in that home there were more white clients than black I my self come from a black background family it can effect any one Asians White Chinese, but in saying that I have not come across any Chinese people in all the time I worked around people who as dementia. There are more than one type of dementia there are so many, and things that can actually lead to a person to having this awful brain disease.

I have just completed my final year at the University of West London on the public health and health promotion BSc. I am a Holistic health professional with over 12 years experiences..I like the points that you have high lighted and would like to collaborating with you to address our community needs.

This is unsurprising and I look forward to seeing the conclusions of this research, I hope more leaflets highlight the inclusiveness that needs to be made and people get the support that they need, if there are misconceptions, so that possibly if there is fear of dementia, that these are addressed for B.A.M.E populations.

Really glad to read about this much needed research and the commitment to specific and equal concern for all individuals and cultures - long overdue. The necessity of good data AND changing the narrative which has often been based on poor evidence, anecdotal bias, & inequality of research attention. Thank you Moise Roche for your important work & Alzheimers Society for funding it.