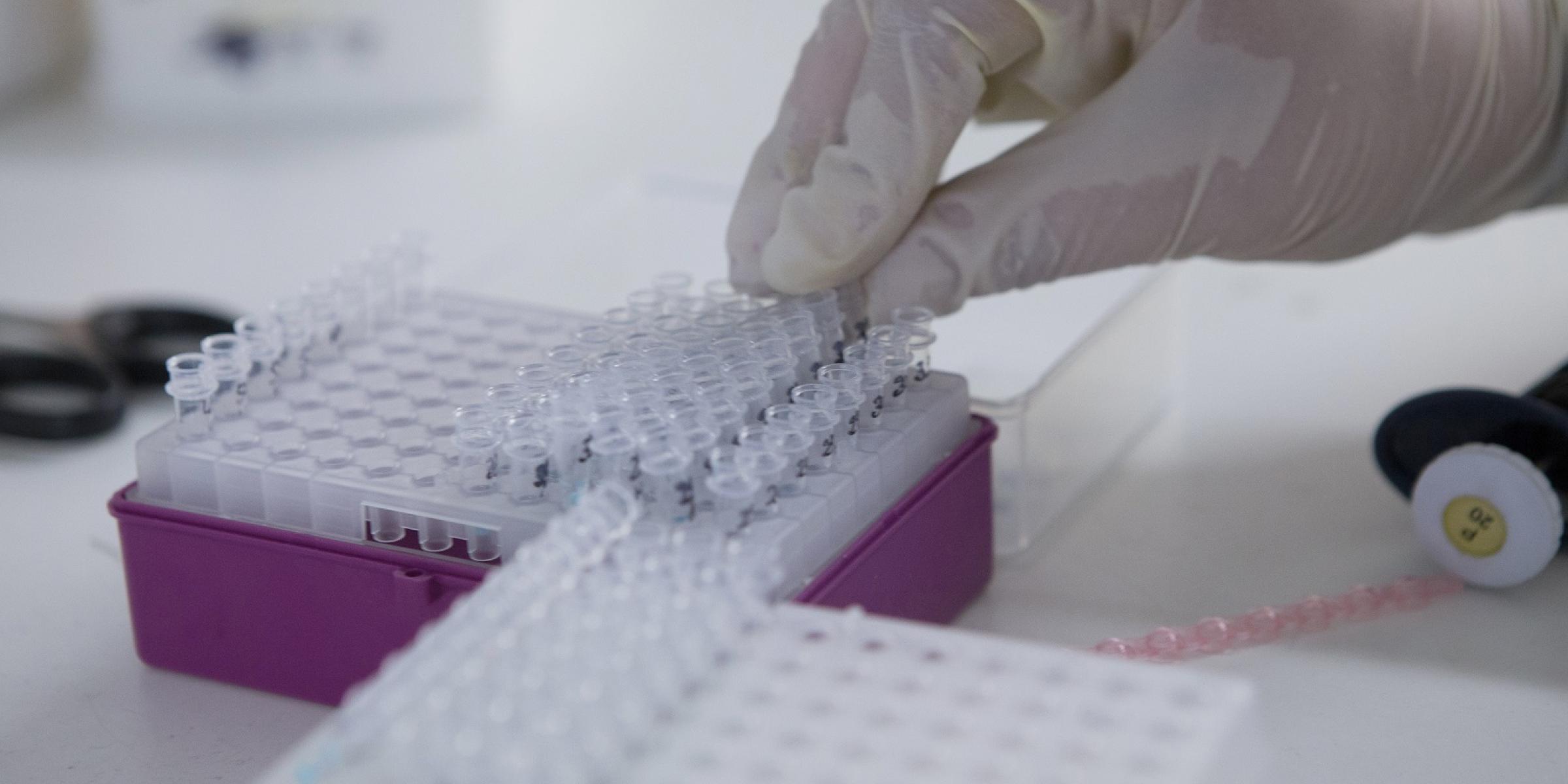 Research
What can genetic tests tell us about dementia risk?
Blog

Genes are just one of many factors that determine our risk of dementia. The number of people who inherit dementia from their parents is very small. So what can and can’t genetic tests tell us?

Genetic testing hit the headlines recently, after the Mirror Online's report of a 23-year-old man told that he had inherited dementia from his mother.

Alzheimer’s Society received lots of concerned comments and questions in response to the article. So here we will outline the basics of the genetic tests available for dementia and most importantly what they can and can’t tell us.

With 850,000 people across the UK living with dementia today, 1 in 4 people over 55 have a close relative with the condition. Inevitably relatives often worry about the possibility of inheriting the dementia.

It’s important to remember that the number of people who inherit dementia from their mother or father is very small. The majority of cases of dementia are down to chance, other medical factors, lifestyle factors and risk genes.

Most dementias are not passed down through the family. This page will help you understand the genetic links for different types of dementia.

These risk gene variants are influenced by age, lifestyle, other genes and overall health to determine whether we might go on to develop dementia. They are by no means the only factor at play.

Of all the causes of dementia, we know the most about the genetics of Alzheimer’s disease. But testing for these genetic variants cannot tell us whether someone will go on to develop Alzheimer’s or not. For this reason, there is no test for these risk genes available through the NHS. Even if you test positively for one or even two copies of a variant you cannot be sure if you will develop the disease.

Alzheimer's disease is the most common form of dementia. The genetics of the condition is the best understood of all the common dementias.

Tests for some gene variants are available over the internet and generally do not involve a doctor or counsellor. This type of testing is controversial and is not recommended by most specialists, firstly because it doesn’t tell us anything for certain. Secondly, genetic counselling is not always offered which is important to make sure that getting this information is the right decision for you. There are concerns that private companies do not always offer enough support to those receiving results so they fully understand what they mean.

There are specific variants in our genes which can be inherited from our parents that do cause dementia. However it’s important to remember that these are very rare. Familial Alzheimer’s for example, is directly inherited through single gene variants but is thought to affect only 600 families around the world.

In some other forms of dementia such as frontotemporal dementia (FTD) it is slightly more common. Up to 30 per cent of people with FTD are thought to have the condition due to a gene they have inherited from their mother or father.

Is dementia inherited? Find out what part genes play in dementia and how genetics can affect the risk of developing the condition.

It’s natural for relatives of someone with dementia to be worried about whether they might also go on to develop the condition. Inherited forms of dementia are rare so shouldn’t be a concern for most people. People who don’t have any symptoms can be tested, but generally only if a close relative is known to have one of the rare genes that directly causes dementia. This is known as predictive genetic testing because if someone does have the rare gene, they will almost certainly develop dementia.

There are specific gene mutations that cause Huntington's disease, familial Alzheimer's disease and in some cases frontotemporal dementia.

As we have mentioned genetic testing for risk gene variants isn’t thought to be very informative and so isn’t encouraged by specialists.

Testing for rare single gene variants is an option in some circumstances and is generally only offered if there is a strong pattern of dementia in the family. Genetic testing should be accompanied by genetic counselling. The decision is a very personal one and there is no right or wrong choice. Counsellors are able to help you talk through whether you want to find out, and if so, whether it’s the right time.

As we have mentioned in this blog, in some cases our genes affect our chances of whether we will go on to develop dementia. However dementia is incredibly complex and there is very rarely one single cause. There are many other factors including age, lifestyle and overall health that also have an impact.

Unfortunately dementia is a common condition and over 1 million people will be affected in the UK by 2021. Alzheimer’s Society is here to support everyone living with the condition, today and in the future, to live well and to unite against dementia.

Risk Factors, Genetics
Back to top

My mum has vascular dementia, watcher with this awful disease breaks my heart, and I’m petrified of getting it too

My husband has CADASIL dementia, which is genetic if he didn't have the genetic test done he would've been diagnosed with young onset dementia Alzheimer's.

I appreciate all contributors here.
I am worried where my family is concerned because I am caring for my husband whom has dementia, brittle diabetes and Parkinson's and is gradually going both death and blind, and his emotional health is not good. My sons have their own disabilities of learning difficulties and autism and memory problems, recently moved to a different surgery where blood tests have found both to have under functioning thyroid and diabetes . The income has dropped because of the DWP have hounded sons as DWP really do not understand enough about these disabilities and it would be so good if the Alzheimer's society could actually educate from senior management
down those working at the DWP, what it can mean to those whom have lose of memory for those whom prior to such had learning difficulties but also to respect them and not treat them and their carers with predigest.
Thank you for reading and god bless all affected with
dementia and those family carers struggling to care for them at same time as having to do all the things that other families have to do and cope with.

UCL do a free online course lasting 8 hours titled THE MANY FACES OF DEMENTIA which has just started and covers frontotemporal dementia. The couse is accessed through FUTURELEARN. I found the courses usefully in understanding my wifes illness.

Complete respect for commenters. I share some concern owing to my parents, although a also advocate the "live life" sentiments. There's a good TED TALK I recall titled "How I'm preparing to get Alzheimer's" which was/is also insightful. Also the documentary Understanding Alzheimer's available on (I think) Netflix, but possibly YouTube.
Having some anxiety I empathize (and have) with you. Trying to shore-up for maybe-tomorrows, but mainly live for today and as many good tomorrows life can muster.
Best positive vision alignment wishes to you all .

I was diagnosed with Alzheimer’s at the age of 60. I was absolutely devastated when the doctor confirmed my diagnosis. I am a fit and healthy person and have kept fit and always had good health. I continue to live a happy and healthy life. With Donepezil slowing down the deterioration I manage to converse with others although I can’t always find the word I need immediately. I have an extremely supportive husband, friends and family. I keep up with my hobbies such as running and choir singing and being with friends is helpful. Organising myself can sometimes be difficult. It is not something I allow myself to worry about. With early onset it is important to remain positive and live life!

My two aunts, uncle and now mum have dementia (all brothers and sisters). Am worried I will inherit this cruel disease.

That’s a very informative post my dad has Frontotemporal dementia I’m just about to embark on genetic counselling as I’m very very worried about inheriting this awful disease.