Jake is a paramedic and author who had first-hand experience of dementia from caring for his father. Jake shares how good non-verbal communication can be useful when supporting his patients with dementia while at work.

Jake Jones
Jake's book: Can You Hear Me?
1 comment

During the early stages of my dad’s dementia, our conversations sometimes felt like obstacle courses. My attempts at casual questions would make him freeze with terror, as if I was interrogating him.

‘Have you done anything nice today?’ I would ask, or, ‘What did you have for lunch?’ But I might as well have been quizzing him on my date of birth, who the prime minister was, or how to spell ‘reminiscence’.

Suddenly everything was a test and our familiar chats had become tinged with cruelty.

I didn’t fully appreciate it at the time, but my questions were putting my dad on the spot and drawing attention to the gaps the dementia had created in his thought processes.

Gradually I learned to adapt the way I spoke. I tried offering a statement followed by a question, making our dialogues lop-sided but smoother, and hopefully less daunting: ‘I hear you went for a nice walk today. It was lovely and sunny, wasn’t it?’ In reply, he could say as much or as little as he felt able at the time.

For me, this felt like a poor imitation of our past conversations. But I was starting to understand that communication wasn’t about exchanging information anymore. It was now a kind of music through which we could sustain our bond. Like so many others in the same position, we were moving into a new version of an old relationship.

As time went on, and our conversations became almost completely one-sided, the words themselves grew less important.

Now gesture, tone, touch and expression became the language, and the message behind them was reassurance.

I carried on speaking to my dad, but the things I did – sitting alongside him, holding his hand, making eye contact and smiling – conveyed a meaning beyond words. 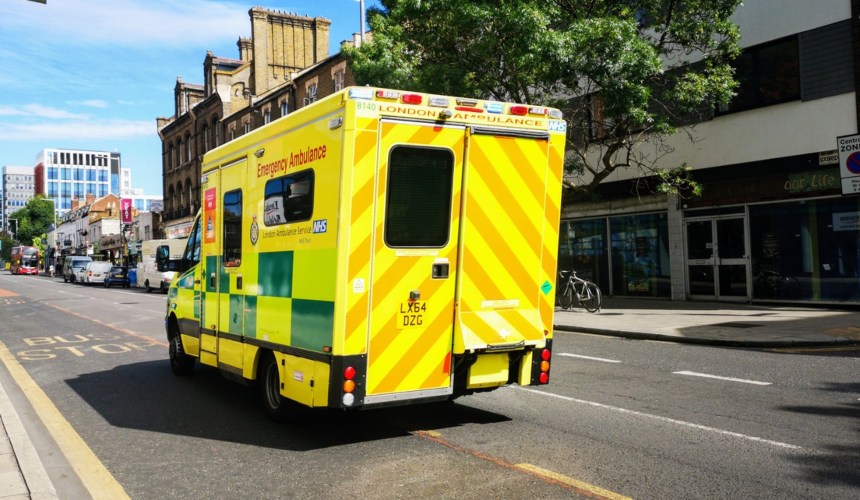 Working in the emergency services

Soon after my dad’s Alzheimer’s diagnosis, I began retraining as a paramedic, and I try to apply these lessons when I encounter patients with dementia in my work. Emergency ambulance crews are used to responding with urgency and dynamism – but encounters with dementia patients often require a different approach.

Good non-verbal communication is essential in such situations. The arrival of uniformed strangers carrying medical apparatus can be intimidating at the best of times. A comforting hand on the shoulder, a warm smile and a soothing tone can go a long way to putting patients with dementia at ease in frightening times.

Coronavirus has made non-verbal communication more difficult, especially with the use of face masks, but there are other ways that I use to make the encounter less scary.

I always try to approach patients at eye level, kneeling down where necessary. It’s also important to make the environment as calm as possible: background noises, sudden movements and even unusual sensations can all be distressing, so I try to minimise these.

Of course, communication is a two-way process, and not all patients can describe or identify sensations and experiences, such as pain.

When a patient is unable to discuss what’s wrong, it’s helped me to read some of the signs of pain and distress in facial expressions, changes of body language, unusual behaviours and vocal tics.

A range of non-verbal assessment tools now exists to help clinicians assess patients with communication difficulties. In my experience, however, they’re most effective when people who know the patient best are involved in the process.

Each person with dementia is unique, and experiences the illness in a unique way.

An attentive carer or family member can offer crucial advice on exactly what’s new or concerning, guiding the assessment and providing vital context.

I know from personal and professional experience that none of this comes easy. When someone can’t express themselves in the way they used to, it can be a frustrating experience for both parties.

But I believe that patience and perseverance are the key, because trusting in a message that’s deeper than language is the necessity, and perhaps even the privilege, of dementia care.

Learn more about Jake's experiences as a paramedic in his book, Can You Hear Me? An NHS Paramedic’s Encounters with Life and Death.

Our factsheet on Communicating (code 500) is written for carers of people living with dementia. It gives tips and advice to support good communication between you and the person with dementia.

Communication, Language problems
Back to top

Have lots of experience in this respect - my late sister suffered a catastrophic haemorrhagic stroke in May 2010 - despite many efforts she never regained meaningful speech. Initially it was quite daunting and I wondered how we would ever deal with this situation - alongside speech difficulties and cognitive problems neither could my sister write her thoughts. It was frustrating for both of us but we managed. Dementia onset 6 years on from the stroke exacerbated the already difficult communication. What I found frustrating was people thinking they understood what my sister was trying to 'say' - when I knew for certain that was not the case - I knew how she 'ticked'. Much more needs to be done to educate care staff / medical professionals in my opinion.