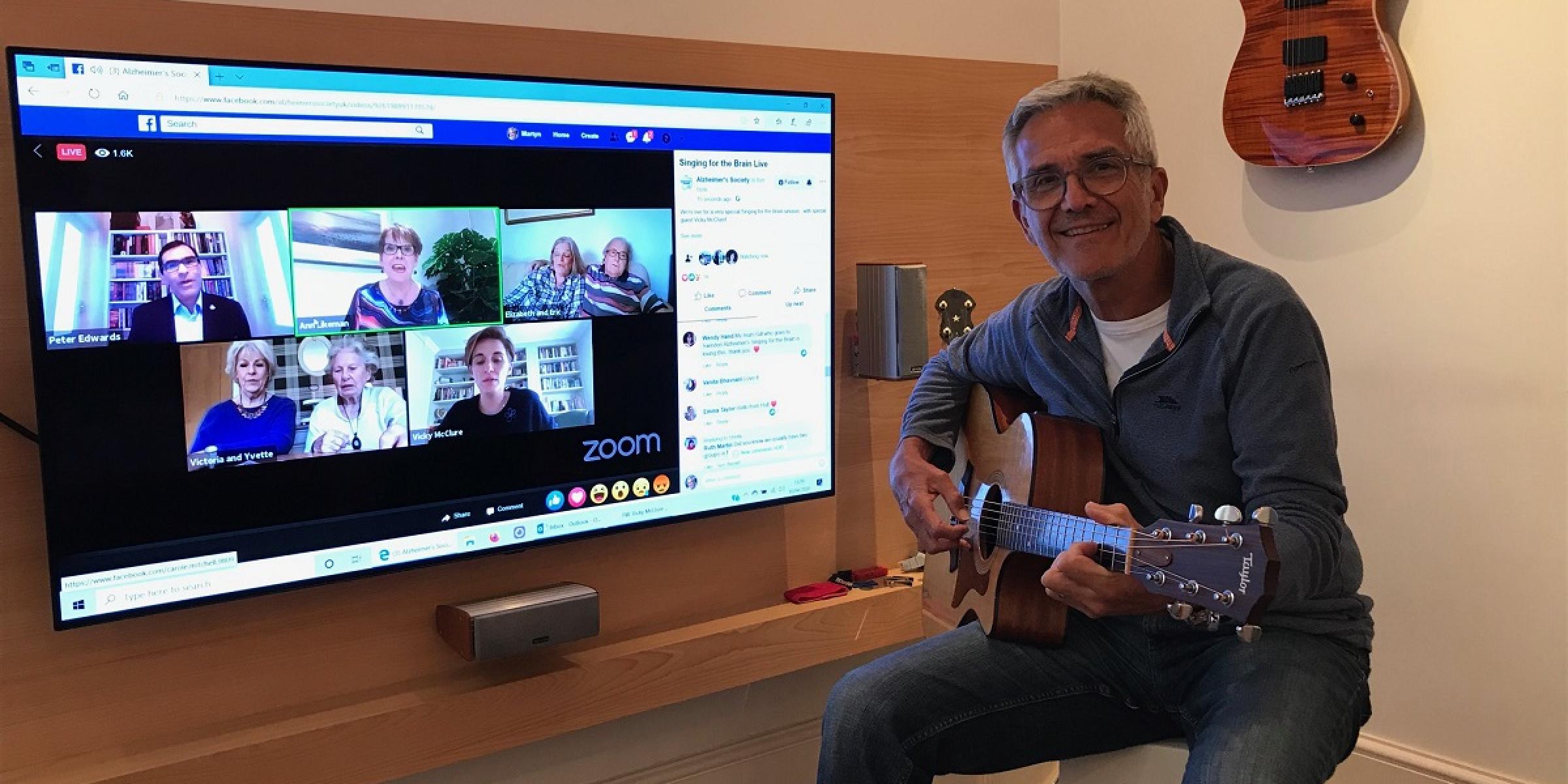 Real stories
'Feel the difference' – I've had platinum discs, but Singing for the Brain means more to me
Blog

After a successful career in the music industry, working with acts like Queen and the Rolling Stones, Martyn Barter wanted to give something back. His dad, Alan, had vascular dementia and Martyn’s search for a link between music and dementia led him to Alzheimer’s Society’s Singing for the Brain groups.

Shortly after my retirement in 2012, the effects of Dad’s dementia worsened significantly. However, I was then in a position to make weekly visits to the family home in Stamford, Lincolnshire.

By this time he was struggling to communicate and it was difficult for our family to see his deterioration. His short-term memory was almost non-existent, and we stumbled over conversations.

On one of my visits I took my guitar along as I was practicing songs for a birthday celebration. My visits gave my mum, Stella, the opportunity to get out of the house and have some “me time” with friends.

The power of music

With just the two of us in the room, I started playing and the result was remarkable. I couldn’t believe the transformation. Dad, who was in his 80s at the time, started singing songs from the 70s word perfectly with me and it was as if the music brought him back.

After singing a few songs, he started to communicate more clearly – it was mind-blowing.

After singing, he was himself again and was able to talk about all kinds of things, including what it was like to have dementia and the demands it was making on Mum.

Dad had become incontinent and found it incredibly distressing, but felt helpless against it. He told me it was like not knowing his own body anymore, like he didn’t know if he was going to break wind or something worse.

Later that evening as I was leaving for the journey home, when he had absolutely no recollection of our morning singing session and chat, he said “Martyn, can I give you some advice? Don’t trust your farts.” That was my dad, and I left the house in tears.

On the drive home I was thinking over how he had made a joke about his incontinence eight hours after our conversation about it, of which he had no recollection. I put it down to the music and singing.

When I got home, I Googled “Music and dementia” on my computer. It blew my mind to see the wonderful and miraculous things people were doing with music around the world to help people with dementia. A link caught my eye, it said, “Singing For The Brain - Alzheimer’s Society” – I clicked on it and my volunteering journey commenced.

Singing for the Brain

I joined Alzheimer’s Society in 2014 and first volunteered at the Epping/Harlow Singing for the Brain groups. I was supporting the group leader and occasionally leading the sessions when they discovered I could play guitar.

Dad passed away in 2015 and it was then that I decided to start a new service where I live in Buckhurst Hill, Essex. I now lead all three groups, Buckhurst Hill, Epping and Harlow. I’m still not quite sure how that happened but I’m glad it did and I get the best feel-good sensation I’ve ever known. Other than meeting my wife, Joy, of course!

What I love about it is that the group members and volunteers all feel the same thing – the music, the enjoyment it brings and the difference it can make to how we feel is incredible.

I had different roles in the music industry since my early days at EMI records where I worked with Queen and the Rolling Stones. The 10 years that followed saw me at an artist management company working with global icons like the Band Aid artists and Ultravox. Then later at my own company, Freedom Management, developing and establishing some of the UK’s most successful songwriters and producers. My team worked on hits for the Spice Girls and Take That among others until my retirement in 2012.

I have been on some fantastic journeys with musicians but Singing for the Brain gives me something else. I can’t describe how good it feels after a group session, but the feeling lasts for weeks.

I’ve had gold and platinum discs during my career, but Singing for the Brain is by far the most meaningful thing I have ever done in music.

Normally Singing for the Brain groups meet in person, but during the coronavirus crisis they’ve moved online.

The virtual sessions have been brilliant – the most recent one had 70 people joining the session. The first moment when a group member recognises someone they know on screen is fabulous, they just light up, seeing this reaction from so many people is wonderful.

As well as this familiarity the sessions have helped our members restore some routine, which can really help in the current situation.

The feedback I have had from family members has been amazing. Our members are going from being more insular [during lockdown] to opening up and engaging, with their spirits being lifted for days afterwards.

Martyn joined our national online Singing for the Brain singalong. If you missed it or would like to sing along again - press play to watch the video below.

Singing for the Brain - join us!

Find out more about Singing for the Brain and how the sessions are being adapted during the coronavirus crisis.

Music and Singing, Toilet problems, Volunteering
Back to top

This work is so Important. Perhaps one day we'll understand how music can seem to bypass the brain and work with the soul. My Mum use to come to us each Christmas. Invariably we had a sing song around the tree. This wasn't possible for her last Christmas, as she had moved to a dementia care home. They were brilliant At Woodlands, but they felt it to disruptive for mum to come to us. My wife suggested we took the sing song to here. So I grabbed my 12 String, my Daughter with Ukulele and we visited and sang some carols and songs. As Martyn's experience, it was if all the residents came back for a short while. Singing and clapping along. I have no doubt regarding the power of music. Mum singing along to silent night is how I remember her at that time in her life.....

Anthony, my father and I have loved Martyns sessions at Buckhurst Hill . His music has bought back many happy childhood memories for me to share with my dad. Plus meeting lots of new very friendly people has been lovely. Unfortunately my father is quite poorly now so unlikely to make any more of his sessions but they have created lasting memories for me to treasure. Thank you to everyone involved in bringing together these sessions.