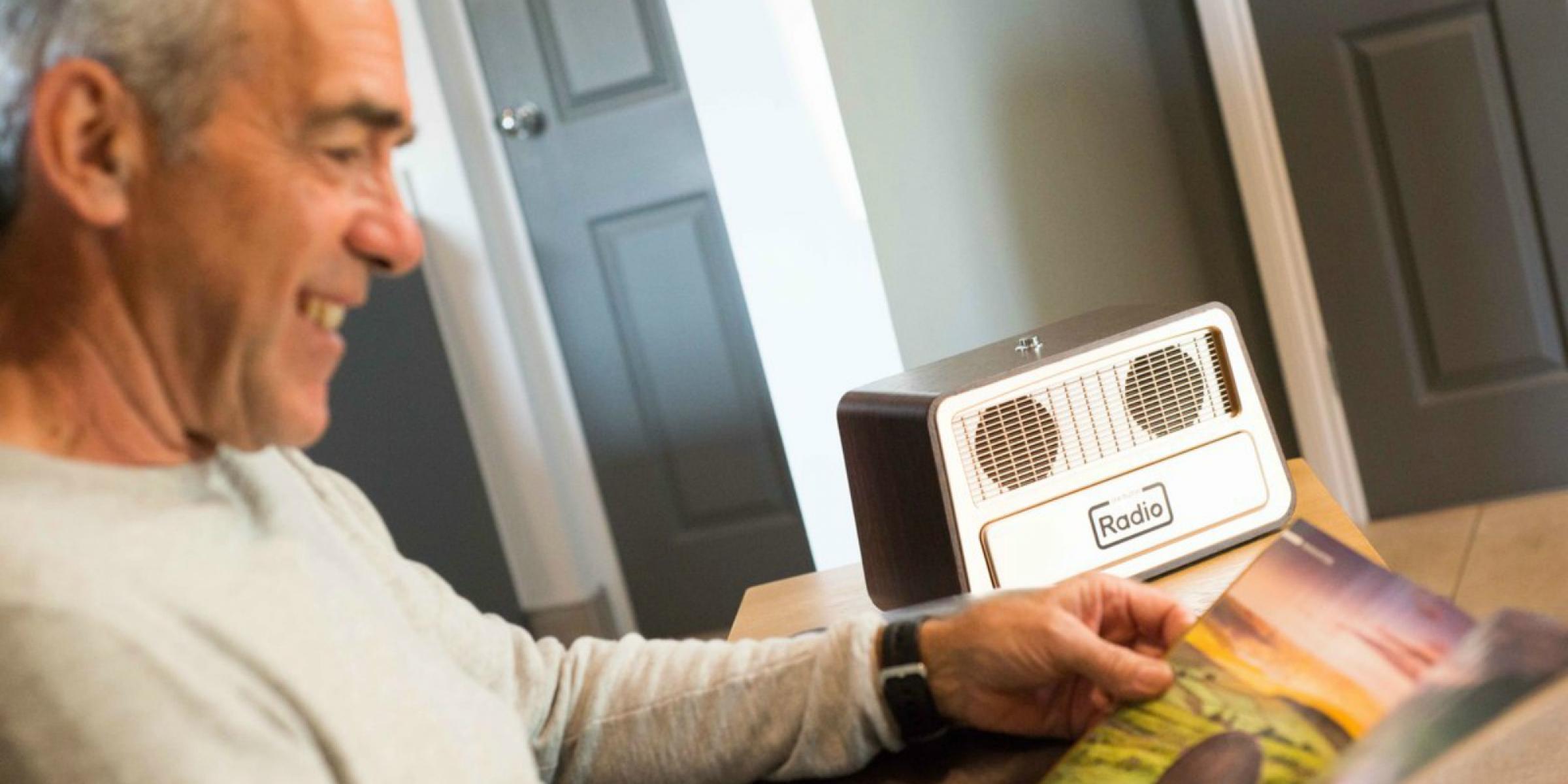 Check out the five most popular items from our online shop for people affected by dementia during the lockdown, designed to help with day-to-day challenges for people living with the condition.

Now more than ever, it’s important to keep in touch with one another and make sure loved ones living with dementia are safe and supported at home.

All of the products featured on our online shop are tested and reviewed by people with dementia and their carers, to make sure we’re bringing you the best selection.

2. Get Up in the Night Sensor Light

The Get Up in the Night Sensor Light is a bright strip LED that comes on if it’s dark and movement sets off its motion sensor, going off after 30 seconds. It can be placed alongside a person’s bed so that it comes on when they get up in the night and in many other places in the home. The sensor light can help people with dementia avoid unnecessary injury from trips or falls in the night.

The waterless Towel Off Shampoo is a great alternative to bathing or showering. Unlike dry shampoos, waterless shampoo cleans away dirt and grease leaving hair feeling clean and healthy and comes in handy for when assisted bathing may be more of a challenge for a person living with dementia. It’s simple to use; simply apply the liquid, massage into the hair and towel dry thoroughly after.

The 63 Piece Jigsaw puzzle is perfect for people with early stage dementia because of its large pieces and age appropriate image. The puzzle pieces are made from plastic meaning it is more durable and easier to clean than traditional jigsaws and also suitable for hospital or care home use.

The One Button Radio is a retro-look AM/FM radio. Once the station and volume has been set, the only visible button is a simple on-off switch. This means that if a person with dementia finds a range of buttons difficult or confusing to use, they only need to use the single button on the top of the radio to turn their favourite station on or off.

We always offer the best prices we can by regularly comparing them. If you’re eligible, you can purchase many products at the cheaper VAT relief price. You can download the digital version of the daily living aids catalogue or call 0300 124 0900 (local rate) for a printed copy.

People with dementia may react differently to different products. For example, one person might find it helpful to have a recorded message that plays when they open the front door, reminding them to take their keys, while another person might find this confusing. Some people may also be wary of trying new things or find it difficult to learn new skills.

The products you purchase should suit the individual and their situation. Always speak to your healthcare professionals before buying if you are unsure.

Send a digital card to show you care

Electronic cards, known as e-cards, are a great way to keep in touch with your family, friends and colleagues during the coronavirus outbreak. If you'd like to, you can also add a donation to support our work.

Browse e-cards in our shop

Support
Back to top

Hi, l lost my dad to alzheimer's/dementia early June, lm absolutely heartbroken,
I've had to put a complaint into our local hospital as like many others my dad.qas having a few falls at home, on one occasion (Feb 2020) he was taken into hospital after a fall at home, whilst there he was taken to xray, after his xray he was left in the waiting area alone, this ended with him falling out of the trolley and being found face down on the floor,
They took him for a scan which revealed that he had now fractured his skull and had a bleed on the brain, since that day my dad's illness progressed so fast that we had to put him into a care home, without this second fall he would have been sent home, lm speaking with the hospital as there negligence has caused us as a family so much pain. My aim is to try and get something that a patient with alzheimer's/dementia wears when they are taken into hospital so people are aware that they need looking after, as when you look at someone you don't always think there suffering with this awful disease, l was thinking maybe a blue wristband similar to the name tag you get given with your details on.
Has anyone got any thoughts or gone through something similar.
I believe without the fall and the fractured skull my dad would still be here. X

My Nan was 95 and she had dementia. She passed on 4th May due to Covid19 in her care home. We had her funeral yesterday and we asked for donations to the Alzheimer's society. That's why I was looking at your website. My Nan liked to play "Pizza! Pizza!" It was my 7 year old daughters game and they loved to play it together xx

My mum loves to join in play with the sticky ball dartboard and the ’Catch the Frog’ Velcro hand catcher game. Both bought online from amazon. Not expensive.

This is helpful
20
Reply

I am a stroke survivor and a Ambassador I see the items, they good for survivors as well

This is helpful
24
Reply

I don"t know if this is the right forum to ask for help, but here goes. I was diagnosed with FTA 4 years ago (roughly could be more)and I wondered if there was anybody else out there who would like to chat and support each other? I feel very alone and scared sometimes, and it would lovely to chat to people who understood.

This is helpful
23
Reply

Hi Lynne, thanks for contacting us.

I'm so sorry to hear you've been feeling alone and scared sometimes. This can be a common experience, but it's important to know that we're here for you and there are lots of people you can talk to about how you're feeling.

If you'd like to talk to other people living with or affected by dementia, our online community Talking Point is a great place to visit. Here, you can ask a question, share your feelings or look through existing conversations and threads started by others: https://forum.alzheimers.org.uk/

If you ever need any dementia information, advice or emotional support, you can also call our support line and speak with a dementia adviser. Just call 0333 150 3456 - you can find more details and opening hours here: https://www.alzheimers.org.uk/get-support/national-dementia-helpline

Hope this is helpful,

This is helpful
20
Reply

We have Ludo, Jenga, Connect 4 and Jigsaws

This is helpful
21
Reply

We already have all five of the items you recommend plus one other thing which is a game, snakes and ladders, which my Mum loves to play 😀🌹