Currently there is no evidence to show that cannabis or cannabis oil (CBD oil) can stop, reverse or prevent dementia.

Can cannabis or CBD oil treat dementia or its symptoms?

There are no research studies that prove cannabis, or products such as cannabis oil (CBD oil), can stop, slow, reverse or prevent the diseases that cause dementia.

Some studies suggest cannabis could help to manage a few behavioural symptoms of dementia, such as agitation and aggression.

But more research is needed to understand the long-term effects of taking cannabis, and whether it is an effective and safe way to tackle dementia symptoms.

If you have any questions or concerns about cannabis use and the risk of dementia or other brain disorders, please talk to your GP.

Read our advice to help reduce your risk of developing dementia.

There is currently a lack of evidence to show that coconut oil plays any role in preventing or treating dementia or its symptoms.

Cannabis, also known as marijuana, is a plant. The dried leaves, flowering parts or resin extracted from the plant is taken recreationally.

Cannabis is made up for two main components – Tetrahydrocannabinol and Cannabidiol.

What is Tetrahydrocannabinol (THC)?

THC is the main component of cannabis that invokes feelings of sociability, happiness or relaxation.

Products containing more than 0.2% THC are not legally available in the UK.

What is Cannabidiol (CBD)?

Cannabidiol or CBD does not cause any psychoactive or intoxicating effects.

Products that contain CBD are legal and can be bought on the high street or online.

Is there any evidence behind the cannabis and CBD oil claims?

There have been no clinical trials on the effects of cannabis or CBD oil in people living with dementia.

A key hallmark of Alzheimer’s disease is the build up of clumps of a protein, called amyloid, in the brain. Some studies have shown that components of cannabis, including THC, appear to remove this protein from nerve cells grown in the lab.

Another study that gave both THC and CBD oil to mice with symptoms of Alzheimer's disease showed an improved in learning and had less evidence of amyloid clumps in their bodies.

Research continues to better understand the effects of CBD oil on the brain. Some early evidence suggests that CBD oil may reduce inflammation in the brain, although this has yet to be proven in people. 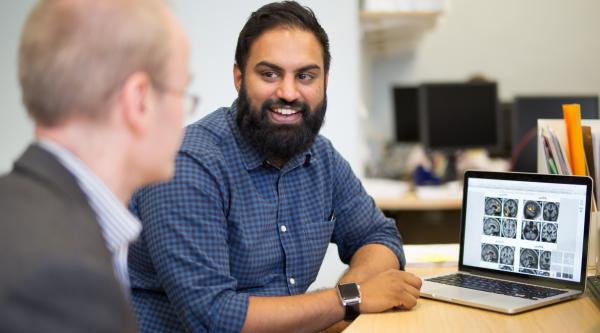 Research
Here we take on some of the common myths surrounding clinical trials, and explain why they are vital for driving dementia research forward.
7

Tackling the symptoms of dementia

Research does suggest that high concentrations of CBD oil could be useful for managing some of the symptoms of dementia such as agitation and anxiety.

A few small clinical trials have assessed the effects of cannabinoids (including THC and synthetic cannabinoids, such as nabilone) on behavioural symptoms of dementia. However, trials and studies so far have generally been small or low quality making it difficult to come to a conclusion.

It is also important to note that the researchers in these studies have used high concentrations of CBD oil that may not be available to buy. These studies have also been short term so we still don’t know what the long term effects of using CBD oil might be.

A study is currently underway at King’s College London that will look at whether a mouth spray containing cannabinoids could be used to reduce symptoms of agitation and aggression in a small group of people with Alzheimer’s disease.

The jury is still out on whether cannabis or its by-products could be used to treat dementia. A lack of strong research studies mean that dubious and anecdotal reports have taken the place of hard evidence.

No studies or trials have looked into the effects of cannabis or its components on the underlying causes of Alzheimer's disease in people.

Whilst the studies in the laboratory show some promise, we need to understand the wider effects that these components have before we can know whether they have any effect - positive or negative - on the development of Alzheimer's in people.

There is some evidence that heavy, long-term use of cannabis could have a negative effect on our memory and thinking. Much more research needs to be done to tease apart any potential benefits and drawbacks.

It is also worth noting that many of these studies have involved a particular component of cannabis in isolation. Even if one component is found to influence dementia risk, it doesn't necessarily mean that taking cannabis would have the same effect.

There is also a large amount of variation in the levels of THC and CBD oil in different strains of the plant so the effects could depend on the type of cannabis used.

Has Alzheimer's Society ever funded research into cannabis and dementia?

This is because we have not received any high-quality applications from researchers intending to investigate these issues.

If we received a high-quality application into cannabis and dementia from a researcher based at a UK university, research institute or NHS trust, then we would certainly consider this for funding.

What research is Alzheimer's Society funding?

Learn more about the research projects we currently fund and have funded previously.

Can I buy supplements to prevent or treat dementia?

Research
We examine the truth behind the sale of supplements, vitamins, products and therapies that claim to prevent or treat dementia, or boost memory.
21
News

Researchers at the University of Utah have analysed the effect hearing familiar music has on the brain of people with Alzheimer’s disease.
Research

It is thought that electrical stimulation of nerves via the skin may cause chemical changes in the brain. Learn more about this procedure as an alternative treatment for dementia.

Current findings indicate that bright light therapy may benefit people with dementia, but further research is needed. Learn more about this alternative therapy.

There is currently limited evidence to suggest that aromatherapy and massage could be beneficial for people with dementia.

As the dementia progresses, many people develop behaviours that can be challenging. This includes restlessness and aggression.
Advice

There are various ways to treat and support some one with dementia who also has learning disabilities. Here we outline a couple of these treatments, as well as our tips for carers.