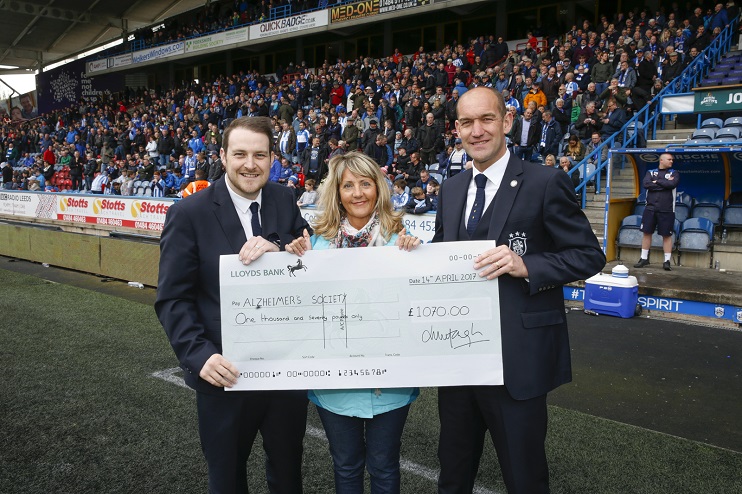 The promotion-chasing Championship club have donated more than £1,000 to Alzheimer’s Society after adopting an initiative suggested by one of the club’s supporters on social media.

After the club announced its third kit would be a tribute to the legendary Ray Wilson and his part in England’s 1966 World Cup win in the summer, Town fan Andy Kaye got in touch via Twitter to suggest that proceeds from printing could be donated to the charity.

Andy’s idea came on the back of the news that 82-year-old former Town and England left-back Ray, who is still a regular in the stands at Town games, is living with Alzheimer’s disease.

Subsequently, the Terriers, who are aiming to secure promotion to the Premier League through the end-of-season play-offs, confirmed the £10 printing price would be donated straight to Alzheimer’s Society if any fan got ‘WILSON 66’ printed on the back of their replica third shirt.

The result of that initiative was a cheque presentation during the half-time interval of the Yorkshire club’s home game with Preston North End at the John Smith’s Stadium.

Club ambassador Andy Booth and retail manager Luke Cowan presented a cheque for £1,070 to Janette Battye, who a dementia Support Worker for the Kirklees and Calderdale team at the Alzheimer’s Society.

Andy, who played more than 400 times for Town, expressed thanks to the club’s supporters for rallying behind people with dementia:

'I’m thankful to every Huddersfield Town fan who got ‘WILSON 66’ printed on their shirt and contributed to this – and to Andy Kaye for the initial suggestion,'

'When the club can work with fans on initiatives like this it always will and it’s a fantastic amount for a very worthy cause.'

Alzheimer’s Society community fundraiser Julie Lee said the money would help fund essential services for people living with dementia and their loved ones:

'We are enormously grateful to Huddersfield Town for the way the club has shown its support for people affected by dementia, like Ray Wilson, and made such a kind donation.'

'It is thanks to the generosity of clubs like Town uniting with Alzheimer’s Society against dementia, that we are able to continue providing vital services to people affected by dementia and their carers in the local area.'

Support us on eBay

eBay is an online marketplace that allows sellers to give a percentage of the listing proceeds to Alzheimer's Society.

Donating shares to charity is an easy and tax efficient way to give. Learn more about how your shares can support vital research and services.

Make payday the best day of the month with Payroll Giving. Your generous gift each month help bring us one step closer to a cure for dementia.

From births to retirement parties, at Christmas or a dinner party, if you would like to support Alzheimer's Society as part of your celebration we are here to help.

Support us on your anniversary

Find out about the different ways you can support Alzheimer's Society on your anniversary.