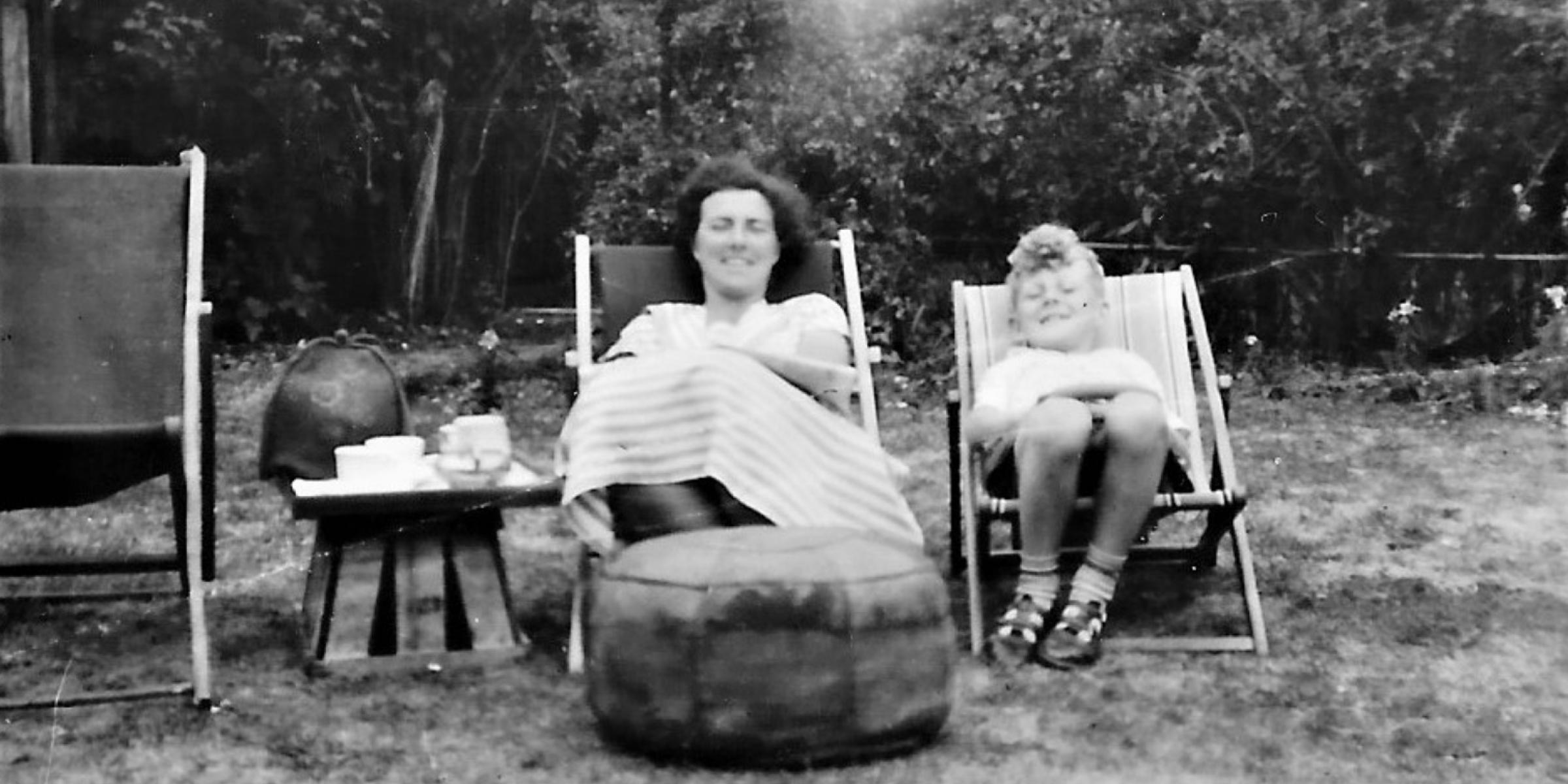 Real stories
Mother's Day and dementia: 'The warmth of her smile was the summer sun'
Blog

Tony has enjoyed success as a poet and writer in retirement. Sadly, both his late mother and his wife Sheila were diagnosed with dementia. Tony's focus has turned to raising awareness of the condition. His poem, 'The Homecoming', is a tribute to his mother, Gladys.

My dead mother welcomed us home.
Nine hundred years of prayers curled upwards,
‘We remember those whose anniversary of death falls at this time . . .’
I had forgotten the date.
Three weeks of sorting boxes and hanging curtains had stolen time.
Until that Sunday.

‘Peace be with you.’
I saw her face, smiling again.
Not frightened. Not angry at lost memories. Thirty three not ninety three.
I was a child again on the beach. The warmth of her smile was the summer sun.
Happiness welled within me. There were no tears.

Three weeks since an anxious, snow bright journey home to mugs of tea, kindness
and chaos.
Friends of my youth wore old faces I did not recognise.
Faded photographs strained to reawaken past lives, shared anew.
A past life.  A new life.

‘Keep out of the reach and sight of children’.
She never did.
Three generations of outstretched arms gave the lie to that.
A tablet of another kind, in the churchyard, inscribed with name and date alone
does not enclose her life.
She will always be there, to reach out, to comfort.
Welcome home. 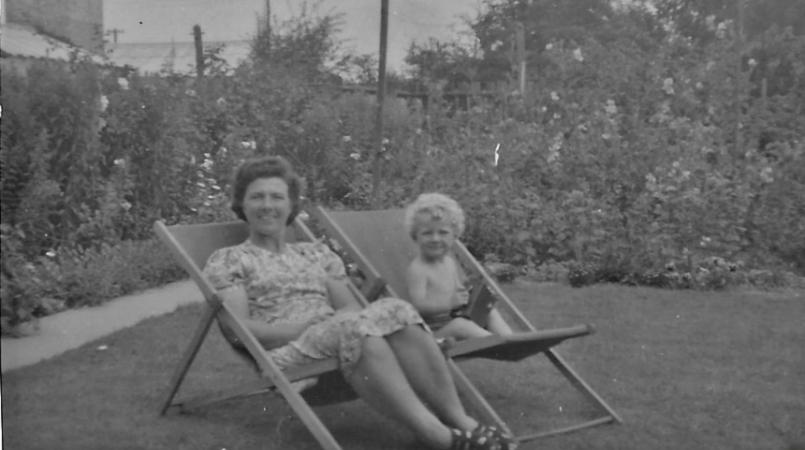 Taken in the garden of our house in Coventry, August 1946, before moving to Eastbourne 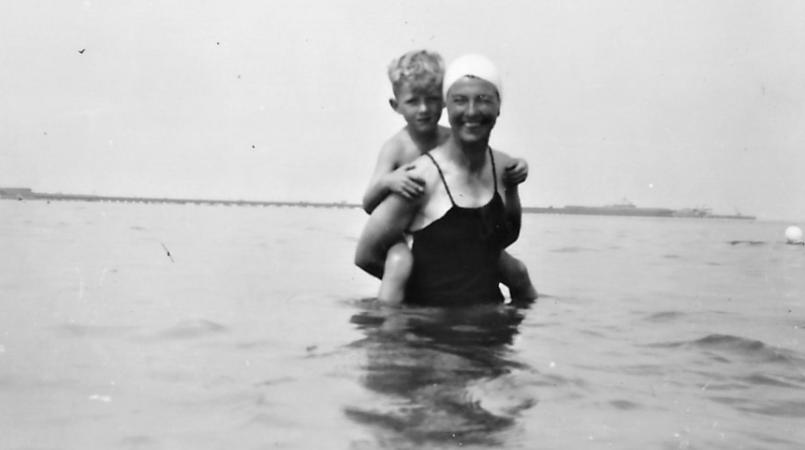 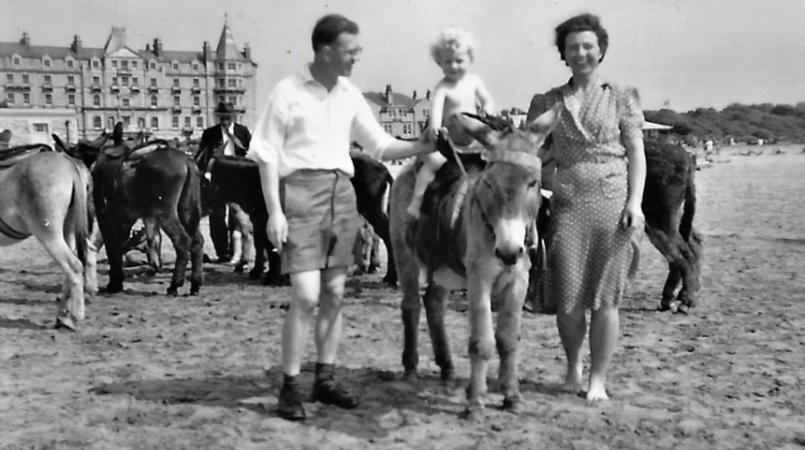 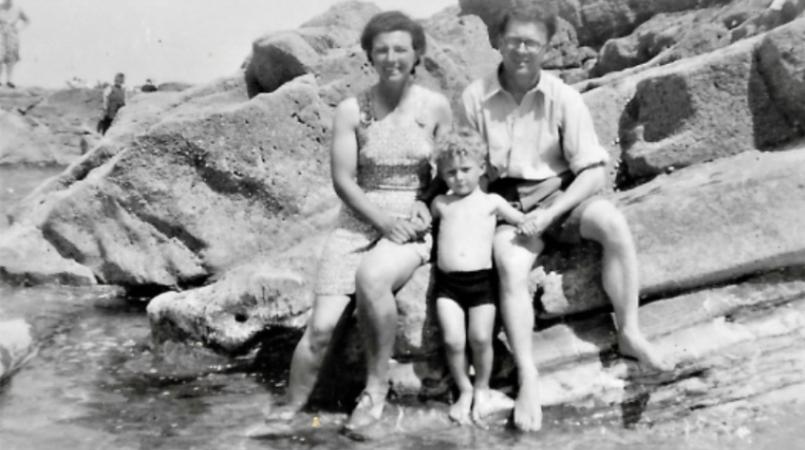 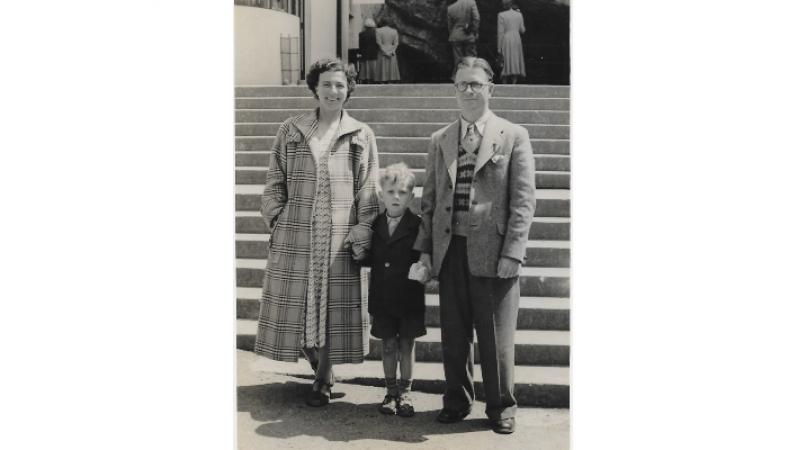 This poem remembers the return of my wife and I to Eastbourne, my family home, in January 2010.

The drive from South Devon was during the worst of the snow that year.  Our new neighbours were amazed that we made it.

After three weeks of ‘sorting boxes and hanging curtains’ we made it to Church on Sunday 24 January 2010. It was the Church I had attended with my parents as a child.

In the rush, I had forgotten the significance of the date. It was exactly two years since my mother’s death, in a Nursing Home where we had relocated her near to us in Devon.

She had suffered from lifelong bipolar disorder and, in her last years, dementia. ‘We remember those whose anniversary of death falls at this time ...’.

She welcomed us home.

The first line in the last verse, ‘Keep out of the reach and sight of children’, is of course the standard warning on boxes of prescription tablets. It always makes me smile.

The ‘tablet of another kind, in the churchyard’ refers to the memorial tablet in the garden of remembrance.

Mum’s ashes are interred with those of my father, Les, who had died twelve years before. Together once more.

A source of comfort

This poem originally appeared in our local Church magazine. Then, at the suggestion of the editor of Families First, the national magazine of the Church of England Mother’s Union, it was subsequently posted to that magazine’s Facebook page, “to bring comfort to others”.

Hopefully, on this Mothering Sunday, it will similarly reach out to further readers, perhaps even raise a smile?

Poems and Poetry, Relationships and Family
Back to top

Very poignant! My Mother died 6 years ago and only became 'confused' in the last few months so my Wife & I were able to quiz her about 'the old days' and get her to explain old historic family photos in a case, which I have now made into 2 'Photobox' books. I urge anyone reading this to do the same before memories fade or disappear or communication becomes impossible - or death.

The 'Photobox' or similar record idea is certainly well worth doing while still possible. When we had to sell my mother's house to pay care fees, it had to be just an overnight visit from Devon to Eastbourne. Due to shortage of time and room in our car we had to abandon a large jumbled drawer of photos and 35mm slides - 60 years of memories. Barry is absolutely right to urge people to act while this is still possible, if nothing else for our children & grandchildren.

Beautiful poem and photos Tony.
Thank you for sharing it with me.