Research
Can these 5 things really affect your dementia risk?
Blog

News stories seem to constantly claim that various things can reduce your dementia risk, but is there any truth in these claims?

We take you through the scientific evidence behind four of the most common claims and one that turned out to be downright silly. 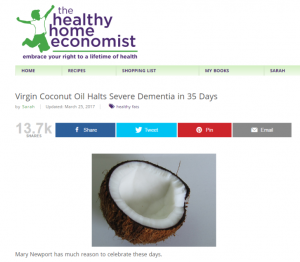 Coconut oil has been hailed as a wonder-food by many in the health-food industry, and there are claims it can even treat or cure Alzhiemer’s disease. There is a theory that in Alzheimer’s disease, brain cells can’t produce energy properly using glucose as normal, so the cells essentially starve. The idea here is that the fat in coconut oil could provide an alternative energy source to glucose which the brain cells could use instead.

However, there isn’t enough evidence to know whether this is actually true. There haven’t yet been any proper clinical trials in people with Alzheimer’s, and without these we can’t know whether coconut oil could benefit people with dementia. 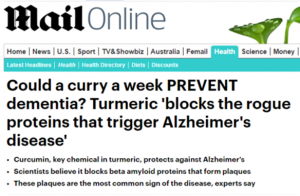 Another story you may have spotted is that turmeric, a common ingredient in Asian cooking, helps to prevent dementia, particularly Alzheimer’s disease. This is based on the perception that there is a lower rate of dementia in Asian populations that have turmeric-rich diets, although this could be due to the condition going undiagnosed or unreported. Curcumin, one of the components of turmeric, has also been shown to break down the hallmark amyloid clumps that are associated with Alzheimer’s disease in cells in the lab.

However, there is no conclusive evidence that turmeric alone can reduce dementia risk. The effects of curcumin have also only been seen in laboratory experiments, not in real people with Alzheimer’s. Clinical trials have so far not supported the findings of these lab studies. This may be because turmeric and curcumin are not easily absorbed by the body, so you would have to eat a huge amount of turmeric to match the amount that was given to cells in the lab.

At the moment though, there is no evidence to suggest that eating more turmeric can prevent or cure Alzheimer’s disease. 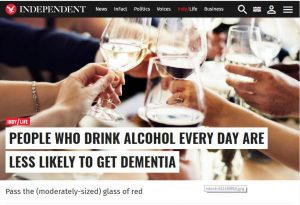 The claim that drinking a moderate amount of alcohol (1-14 units per week) reduces your risk of dementia compared to not drinking seems to resurface fairly frequently. These stories do tend to be based on scientific research, however, when you take a closer look at the studies it may not be so straightforward. 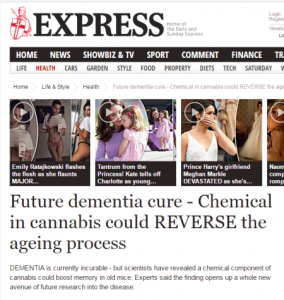 There have been a number of articles over the years claiming cannabis or one of its components could prevent or treat dementia.

Some laboratory research has suggested that components of cannabis could have an effect on some of the hallmarks of Alzheimer’s disease in lab-grown brain cells and in mice. Due to a lack of high-quality studies, there is currently no evidence that cannabis can prevent the underlying causes of the disease in people.

Cannabis does affect the regions of the brain affected by dementia, and some small studies have suggested that cannabis could help to manage some of the behavioural symptoms of Alzheimer’s like aggression or agitation. However, more evidence is needed to show whether this is actually an effective approach. Long-term cannabis use has also been associated with memory and thinking problems, and some types of the drug are even linked to psychosis. 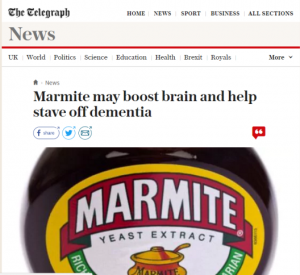 And finally, in April 2017, several newspapers ran a wacky-sounding story claiming that eating marmite could help prevent dementia. The story came from a study by researchers at York University which found that eating marmite had an effect on brain activity.

The problem is that this study was nothing to do with dementia. The researchers were looking at how eating marmite or peanut butter affected how people’s brains react to visual stimulation. In fact, if you read the actual scientific paper, there isn’t one mention of dementia or Alzheimer’s. The researchers themselves said they were puzzled about where the idea of Marmite protecting against dementia came from, because they hadn’t claimed that it would in their paper or the press release.

How this study came to be linked to dementia may remain a mystery. But, as it stands, there is currently nothing to suggest that eating Marmite affects your dementia risk.

Evidence currently suggests the best way to reduce your risk is to have a healthy lifestyle throughout your life, which can include things like drinking in moderation but also includes eating healthily, exercising and not smoking.

Learn more about the things that can and can't increase your risk of getting dementia, including your age, genes and lifestyle.

Can these five things really affect your dementia risk? &#82

Marmite has been a staple food in my family for many years, and 70 years of eating it did not stop me getting dementia. Quite a few people have told me I was mad to eat the disgusting stuff in the first place.
Regards, Martin Corrick

Can these five things really affect your dementia risk? - Pr

[…] Source: Can these five things really affect your dementia risk? […]

Actually marmite might help as it has b12 and folic acid in which, if you become deficient in these, it can cause memory problems.

Utter nonsense. This is the kind of false exponential rubbish peddled by the Mail and Express. And you'd probably have to eat a ton of the stuff to make any difference, if at all, to B12 and Folic Acid levels. Do Doctors prescribe Marmite for low level B12 and Folic Acid? I think not.

Thank you for your lovely reply Sean. Actually Marmite was on my list of things to eat when I become deficient.

I Have heard about the 4 things (except marmite) which is supposed to be effective in treating Dementia/Alzheimers, but I was sceptical. So it is very good to read about them here and putting us right on the items. Thanks

Too late for me. Having been told by my G.P. I had Depression and prescribed Antidepressants my son wasn't happy took me for a Brain Scan at the hospital. Following the scan I was given the devastating news I have Early Onset Alzheimers ☹️

Hello Joan, I know just how you're feeling. I was diagnosed in January 2015 aged 64. It hits you like a bullet when you are told the news, but don't be too disheartened. The thing to focus on is the fact that there are always people worse off than you. Try to focus on all the positives in your life. You may find that you learn to value your friends and family more and hopefully they will support you when you are feeling down or need their help.

I am so sad to hear this. My husband was also wrongly diagnosed with depression and it took me 3 years to get a diagnosis. He has also been humiliated by being signed fit for work , being let go because he couldn't remember things, been put on courses he was unable to recall information on and I am still fighting to get help or further financial help. Anyone that can help me out there I would be grateful. He is under 65 .
Xx

Alison ask for a referral to the Memory Clinic where you live; you need support from expert Social Workers and Occupational therapists, plus financial advice in respect of benefits, by the sound of it.

If you have a Carers centre in your area, they will help you to navigate the benefits system; sadly, sometimes, people with mental health issues who appear to be 'physically fit', fall through the net when it comes to young, or early onset dementias.

I worked in this field as a SW for some years, but not for the last 12 years, so my knowledge is out of date, but if there is anything I can do to help, please ask. I am a practising Approved Mental Health Professional on an out of hours team these days and not too far behind you and your husband in age!

Thankyou so much.just knowing people care is helping.Never under estimate the power of kindness. X

Hi Alison, I am sorry to hear about your husband’s misdiagnosis and the problems that it has created with his work and the way he has been treated since he lost his job. I wonder if you’ve ever called our helpline? We’re here to talk through situations and offer support and options on a range of dementia issues, including the type of situation you and your husband are facing with the financial impact of dementia. Do call us on 0300 222 1122 if you’d like to talk in more detail with a Helpline Adviser.

It might also be worth considering speaking to a trained benefits adviser, such as from Citizens Advice (citizensadvice.org.uk), Carers UK (carersuk.org.uk) or a local benefits or carers advice centre, who may be able to help you with claiming any benefits he might be entitled to. It can be difficult to show how someone with dementia struggles day to day through the assessment criteria for benefits like Employment Support Allowance and the Personal Independence Payment because the descriptors lean towards physical and mobility difficulties rather than cognitive difficulties. A benefits adviser can help you with thinking through whether a particular situation can be presented in a way that aligns more with the criteria.

I hope this helps. All the best.
Helpline Adviser