Vicky McClure sang the praises of her musical “stars” as the group united against dementia at the Alzheimer’s Society Nottingham Memory Walk today (Saturday, September 7) 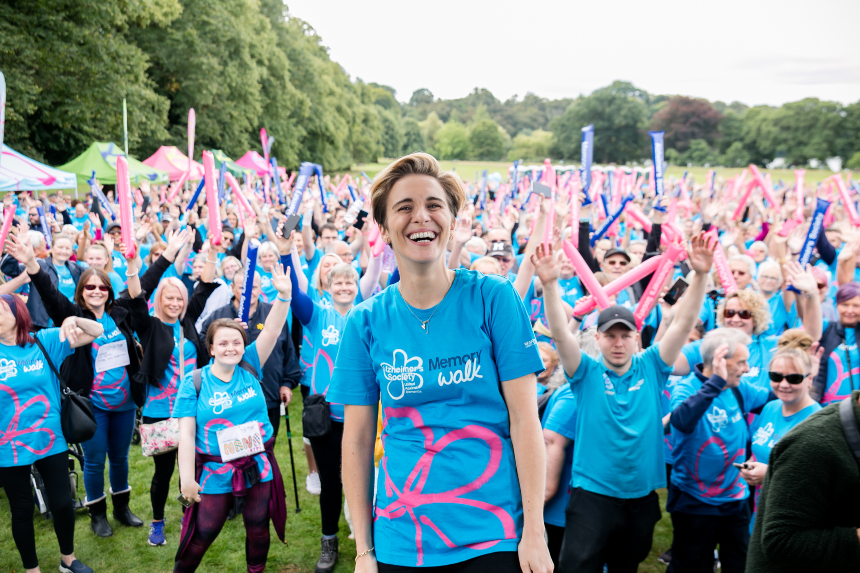 Vicky, an Alzheimer’s Society ambassador, and six members of the choir who melted the nation’s hearts in the acclaimed BBC documentary Our Dementia Choir, sang Stand by Me (Ben E. King) together with a crowd of hundreds to open her local Memory Walk in Nottingham’s picturesque Wollaton Park. Vicky cut the ribbon alongside choir members John and Betty.

The Line of Duty star then completed the Memory Walk with her fellow singers as well as members of her own family in memory of her grandmother, Iris, who was living with dementia before she died in 2015.

And now Vicky is calling on the nation to follow their tune and unite with Alzheimer’s Society by joining the charity’s Memory Walk campaign to raise vital funds to beat dementia.

Speaking about the choir and her support for Memory Walk, Vicky said:

'There’s nothing nicer than seeing a sea of blue on Wollaton Park! The choir members are true stars, because they are so inspirational. Dementia is such a cruel condition, but the choir members prove dementia doesn’t need to be a barrier to living well with the condition and doing the things you love.

'It’s been my ninth successive Memory Walk and it’s always incredible to see so many people uniting against dementia. It’s a cause that is really close to my heart, having lost my Nana to dementia.'

'We want to be in a place where dementia is getting the right funding and we’re closer than ever to finding a cure - which is why I’m calling on people all over the country to join me and many others, by signing up today to take part in a Memory Walk near you.'

'Dementia is now the UK’s biggest killer with someone developing it every three minutes - yet dementia research still trails far behind other health conditions, after decades of underfunding.

'Until the day we beat dementia our researchers are working tirelessly to find ways to make quality of life better for people living with dementia in the UK and their carers too.

'In the hour-and-a-half it takes to complete an average Memory Walk, 30 people will develop dementia in the UK.

'That’s why we need people everywhere to follow the choir’s lead and take part in Memory Walk.'

Every penny raised through Memory Walk will help Alzheimer’s Society find a cure, improve care and provide care and support to people affected by dementia – register now at memorywalk.org.uk.

About the Society, Fundraising