Robert cared for his mother, who had frontotemporal dementia, until she passed away. Here Robert shares why he's passionate about dementia research and hopes other carers will get involved, too.

After seeing a recent advert to become a Research Network volunteer, I didn’t hesitate to apply. The opportunity to support a charity that helped me as a carer and to contribute towards cutting-edge dementia research was too good to turn down.

By sharing my reasons for joining the Network, I hope to make other carers realise their experiences are valued and can be utilised by Alzheimer’s Society in the battle against dementia. 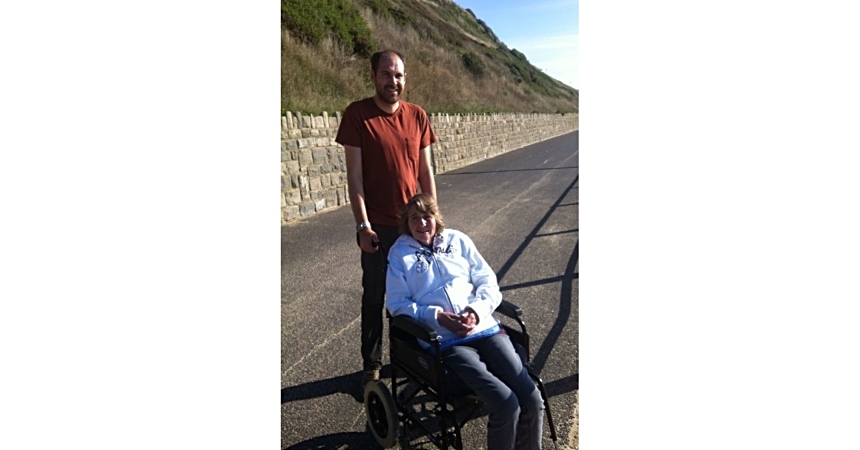 Frontotemporal dementia: what is it?

In 2011, my life changed dramatically.

Two days after graduating from university, my mum was diagnosed with frontotemporal dementia, aged 52.

I became her primary carer and took responsibility for organising her daily care, financial affairs and health issues.

Alzheimer’s Society proved to be vital; the local office signposted me to services and resources that provided important practical and emotional support.

After mum passed away in 2013, I was left deeply affected and with an urge to use my experience positively.

Since 2015, I have volunteered as a Regional Facilitator for a charity supported by the Dementia Research Centre (DRC).

In this role I have provided advice to many families in London confronted with a diagnosis of frontotemporal dementia. This service has been made possible through Alzheimer’s Society’s contribution to the DRC. 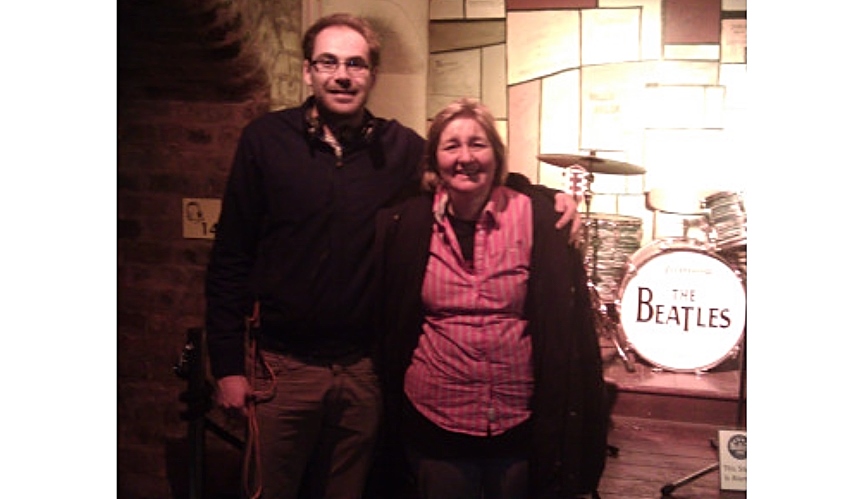 It is easy as carers to undervalue all of the skills and knowledge we amass. Often we reduce caring to a duty or something that anyone in our situation would do.

I see joining the Network as the perfect way of ensuring that my expertise are maximised and channelled towards research that will ultimately benefit other carers and those living with dementia.

As someone with understanding of a young onset dementia, I am especially looking forward to reviewing proposals that could improve the societal and medical outcomes for those with a similar disease.

Mum’s frontotemporal dementia was not the familial genetic type. It was wholly sporadic and I have no idea why it struck her.

I think that only through research initiatives, such as Brains for Dementia, will it one day be possible to identify those vulnerable to the disease and find a prevention or cure.

My first months in the Research Network have been really positive.

I am proud to have joined a respected group of experts. The regular Network communications have made me feel welcome. There are so many opportunities to get involved in.

If you are someone with experience of dementia, put it to good use and join the Network today!

Research is not just for researchers. Your personal experience of dementia is invaluable. Join our Research Network to make research relevant and impactful for all those living with dementia today and in the future.

Robert has recently published an ebook about his experience of looking after his mum. 'Picking Away: Mum's Journey through Frontotemporal Dementia' is available for Kindle readers now. From 26 March 2019, Robert's ebook will be free to download for five days.

and now I am angry having FTD dementia secondary to neurosarcoidisis. What it does to you is steal your life. I was first apathetic when I got the disease and now angry at what the doctors didn't do years ago for my neurosarcoidosis which preceded the disease. To be a social outcast is horrible. We need support as well as patience and kindness. The pain in my head is horrible. No motivation since the beginning, I sleep all the time and have been forgetful since the begining. I have experiencing increased speech problems. I don't want anyone to hear me talk. I get hallucinations (rarely) and anticipate I will die soon. The only way i can write is with the help of a computer.

My sister was just diagnosed with frontotemporal dementia. She is only 49. I have no idea what to expect or how quick this disease progresses. I will most likely he the one taking care of her and just want to know what to expect. If someone can help that would be awesome. I want.to know the nitty gritty, every detail. Please don't hold back, I need to know what I am up against. As it stands at the moment I work in a nursing home and on the memory care unit, no one has FTD so I can't really use anyone as a base..so any info anyone can give me.would be greatly appreciated.
Thank you in advance.
Mary Kate

Hi Mary Kate, sorry to hear about your sister.
We have lots of information available on our website, so hopefully you can find what you're looking for.
In terms of the condition itself, you might want to read our guide to FTD which has more details and information specific to the condition: https://www.alzheimers.org.uk/about-dementia/types-dementia/frontotempo…
Another key publication is our practical guide to caring for a person with dementia. It's free to download or order in the post and quite comprehensive, so hopefully you'll find what you're looking for in here: https://www.alzheimers.org.uk/get-support/publications-factsheets/carin…
It's also important to remember that you can contact our helpline any time you need for information, advice or emotional support. Find the contact details here: https://www.alzheimers.org.uk/get-support/national-dementia-helpline
Some people also find it helpful to talk to other people in similar situations. You might want to explore our online community, Dementia Talking Point, to connect with others and ask any questions anonymously: https://forum.alzheimers.org.uk/
I hope this is helpful, and don't hesitate to contact the helpline if you need any more information or advice.
--
Alzheimer's Society blog team

I fear a loved one is in the early stages of FTD and don’t know what to do? ... my elderly mum is 91 and was diagnosed 8 years ago with early onset Alzheimer’s, although we think she has had for nearly 15 years. She has been in a home for 1.5 and she is fading away slowly every day! ... we do have some funny moments with her too and have to hang on to them. It’s one of the cruelest conditions! ...

Hi Marie,
Thanks for your comment and sorry to hear about this situation with your loved.
The best thing to do if you're concerned about their memory is to have them talk to their GP. Some people may be reluctant to do this, and we have a guide on our website that may be helpful for you: https://www.alzheimers.org.uk/about-dementia/symptoms-and-diagnosis/how…
It sounds as though you may have already read up on the different types of dementia, but just in case, it's worth knowing that we have lots of information on our website too: https://www.alzheimers.org.uk/about-dementia/types-dementia
I hope this information is useful for you, and that you're able to get an answer from your loved one's GP.
If you need any more information, advice or emotional support, don't hesitate to contact our helpline: https://www.alzheimers.org.uk/get-support/national-dementia-helpline
All the best,
--
Alzheimer's Society blog team

I’ve heard FTD called “cancer of the soul”. It’s an incredibly good description of the journey we’ve been on. This horrible disease is not only killing my Mum it is stealing the very essence of who she was, slowly and surely destroying her physically and mentally. The best estimate is that mums battle with this disease began over 10 years ago. She was only diagnosed in December by which time she was virtually bed bound and a mere shadow of the person she used to be. You might ask why it matters so much that it took so long to diagnose? It matters because while she deteriorated day by day, lost all her social connections, her job and her home and distanced her self from family and friends no one knew why. We questioned who she was becoming, we grew frustrated, angry and hurt. We did not understand that the profound changes in her personality were part of a disease process. I fought the apathy, lack of empathy and decline in self care and physical health every step of the way. I blamed her for what she was becoming. This only served to alienate her further. The last 3 years of her life were a war, rather than knowing the reasons why and trying to make the best of the time we had it was a daily struggle to get her to do things she just couldn’t. In the beginning that was something as simple as washing or looking after her self, in the end it was opening her eyes and eating and drinking.
What happened to my red stiletto wearing, funny, feisty, loving, hardworking, independent mum? I finally found out in December , FTD happened. It robbed her of the ability to have real and meaningful relationships with her family and her grandkids, it caused her to retreat into herself and ravaged her body. At least once we knew the reasons we could look for the positives, accept things as they were and just be. We could enjoy the parts of Mum that remained, finding humour even at the worst times. Unfortunately by this time it was too late for Mum to understand what was happening to her.

The scary thing is FTD is one of the most common forms of early onset dementia, it strikes people in their 40’s and 50’s, it’s fatal with a life expectancy of on average 3 and a half years and yet so few people know about it. The sufferers are not met with sympathy or concern because no one knows what’s happening . People with FTD don’t present with memory problems, they suffer behavioural and personality problems and eventually language and physical difficulties. If you or someone you love are unlucky enough to develop FTD it’s very likely it will take a long time to diagnose and finding the appropriate support is impossible, especially in County Durham. I can’t change the last few years, I can’t have that time back and make up for all the times I just didn’t understand but I will do what I can in mums memory to raise awareness of this disease. My mum deserves that.

My wife has dementia early aged 56. At the moment she sleeps a lot, talks to herself a lot, says very unusual things about people and daily life that don't make sense. I dont know if she at a later stage or not and would appreciate any help as to what I must expect. That's now and towards the end so that I have an idea on how to plan ahead. Im ex military and quite frankly this is breaking my heart. Can anyone advise me?

Hi Tony, sorry to hear about your wife's diagnosis. Our helpline team is going to send you an email.
You can also call or contact the Helpline if you'd like to speak to somebody for information, advice or support. Please find the details here: https://www.alzheimers.org.uk/get-support/national-dementia-helpline
--
Alzheimer's Society blog team