Real stories
Peter’s story (part one): ‘It felt like there was nobody to help me’
Blog

Many people feel a dementia diagnosis means their life is over, and to start with Peter was no exception. Read his full story this World Alzheimer’s Day.

21 September is World Alzheimer's Day. There are 850,000 people with dementia in the UK and many still face the condition alone, without adequate support. We want to reach everyone affected by dementia whoever and wherever they are, so they feel included, understood and supported to live a life they choose.

Diagnosed with vascular dementia at the age of 58, Peter found himself in a dark place, depressed and suicidal.

This World Alzheimer’s Day, we’re sharing Peter’s full story in a three-part blog series. Read the first edition below to find out about his initial diagnosis and how this left him feeling vulnerable and alone. 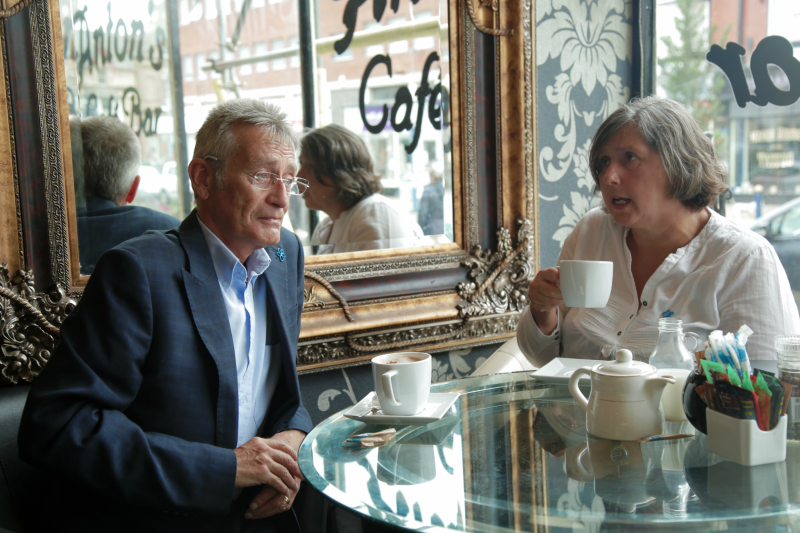 It all started after a catalogue of incidents made Peter suspect he had a problem.

He ordered some clothes online in completely the wrong size. He made arrangements to meet friends only to show up a week early. Then one day standing at the cashpoint, he found himself with his bank card in his hand but with no idea what the machine he was looking at actually was.

'I found myself standing in front of the strange looking instrument built into a wall and in my hand I was holding a piece of plastic. I felt scared, really scared. There were people queuing up behind me and they were making not very nice remarks.'

Worried about your memory? Get our booklet

Download or order a copy of our free booklet with more information about memory worries.

Peter went for a routine blood test and asked the nurse if he could have a memory check too. He was told not to worry – he was too young for anything to be wrong.  They eventually let him take the test, which he failed. The next morning he repeated the memory test with his GP and got the same result.

Peter assumed his memory loss might be a side effect of the medicine he was taking for arthritis, though he was told that was unlikely. After being referred to a memory clinic, they found his recall to be well below average and so was finally ordered a brain scan.

Over six months had passed, but Peter didn’t breathe a word of his ordeal to either his friends or family.

I didn’t want to worry anyone unnecessarily,’ explains Peter.

Peter visited his family for Christmas but still didn’t tell them anything. He kept his fears about what the New Year might hold to himself.

Waiting months for a diagnosis

A couple of months later and Peter was at the hospital for the results of the brain scan.

Peter’s story (part two): ‘It was like someone had turned a light switch back on' 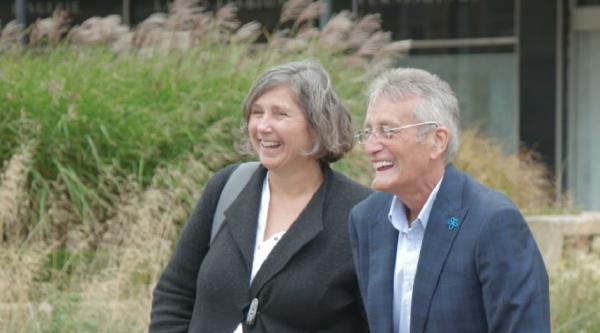 ‘I can tell you word for word how it went,’ Peter recalls.

‘The doctor said, unfortunately, we found a growth on the back of your neck and it’s attached to your spinal cord.’

Peter was trying to process that bombshell when the doctor added:

The damage to the brain was similar to that seen in patients who have been through chemotherapy, which Peter had not. The doctor said he was sorry but that there was nothing they could do. The appointment was over and the doctor got up and ushered Peter to the door. Outside the office, Peter demanded a prognosis.

‘You’ve seen my results, so where do you see me in five years’ time?’ he asked.

The doctor replied that Peter wouldn’t be alive in five years, and advised him to pick up some leaflets about his condition.

'I just stood there on my own and felt there was nobody there to help me. I’d stopped smoking for six months then – it was a big thing for me – and the first thing I did was I went and bought 20 cigarettes.’

‘I was scared, confused. I felt so bad and so down.’

Peter felt like there was nobody to help him and was struggling to deal with his diagnosis alone.

‘I started spiraling out of control so I decided, and I’m so ashamed now, that I was going to end it all. I was feeling very low and suicidal.'

But that same week a letter landed on the doormat from Alzheimer’s Society. It invited Peter to a coffee morning for people with dementia.

Follow Peter’s dementia story in part two,  where he attends an Alzheimer’s Society coffee morning and starts getting his old confidence back. If you need support and advice after receiving a dementia diagnosis, our National Dementia Helpline  is available on 0300 222 11 22.

Sadly Peter’s diagnosis journey is not uncommon. People often have to wait years before receiving a final diagnosis, often leaving them feeling desperate and alone. Help us reach everyone affected by dementia this World Alzheimer’s Day. Unite against dementia today and donate.

Assessment and Diagnosis, Low mood and Depression
Back to top

I hope he found help. My husband was diagnosed at 63 although was poorly before family had noticed several changes. I still don't know where to go to get support for both of us Solihull Alzheimers Society gives out endless leaflets but no real hands on help. Dementia Cafe in Knowle is aimed at 80+ similarly singing for the brain. Never offer talks for carer etc. Interested to know what other areas offer.

Lyn Walsall is the same. The local Pathways 4Life visitor wasn't much help, she even disagreed with the doctors diagnosis ! She came to visit my parents and didn't bring any paperwork with her so nothing got sorted ! She told my mum to buy a Kindle for my dad to read, but he can no-longer read so what would be the point, but she ignored my mum and just repeated 'buy him a Kindle'. We were offered speech therapy months ago, but still nothing. You feel alone, lost and out of your depth trying to cope. Like your husband my dad is in his 60's, most Dementia cafes are aimed at the 80's and over, there needs to be more for younger people and their careers. I hope you do finally get the help and support needed.

Hi Lyn, I’m sorry to hear of your experiences.

For information about services available in Solihull, please visit:
https://www.alzheimers.org.uk/info/20011/find_support_near_you#!/search

There appears to be a number of services run by Alzheimer’s Society that provide support in terms of information and advice, advocacy, carer support groups. You may wish to consider contacting Alzheimer’s Society that covers Birmingham and Solihull who can provide support and information on local services including carers support groups. The team there are available on 01217064052 or via email on [email protected].

Carers UK also provides support to carers plus advice on welfare benefits. You can reach them on phone by 08088087777 or visit their website: www.carersuk.org

Talking Point is an online forum run by Alzheimer's Society. It is an online community that provides valuable support, tips and advice to anyone affected by dementia; this includes family friends, carers as well as people with dementia. Some people have found this to be a useful support. You can visit Talking Point here: http://forum.alzheimers.org.uk/forum.php

Should you wish to discuss any of the above please do not hesitate to contact National Dementia Helpline. Telephone: 03002221122; Email: [email protected]

I hope the above is helpful.

Sadly, Peter had been badly let down by the system.My wife has advanced Alzheimers and fortunately our experience has been very positive. It highlights the "post code lottery" and there should be closer integration of service providers and a common system throughout the UK. Devolution, in respect of health and care provision has been an absolute disaster and MUST be reversed! Anyone in Peter's position should make the Alzheimers Society their first port of call, or Age Concern, to make representations on their behalf and receive advice if they are simply put off by the professionals who are supposed to deliver proper care.

Unfortunately getting a diagnosis of Dementia/Alzheimers was a difficult process a few years ago, as was in my husbands situation too. It took well over 15 years before 'dementia' was mentioned very co-incidentally. And he was diagnosed with Vascular Dementia. So it is a very sorry situation to read about Peters story. But fortunately, once help is accessed, it is amazing what there is in the community that is on offer. The difficult part is that the carer and cared for has to have the perseverance and determination to find and accept help and not give up. Glad there is going to be a positive outcome for Peter, I am hoping.

As a person living with dementia for about five years, I feel that I have been lucky in that I have joined a group of other people who are also 'suffering' from it. We meet fortnightly, when we talk about all sorts of things, sometimes related to dementia, sometimes not. In addition, there is a Women's group, where we usually finish up putting the world to rights and having a good laugh.

This sounds similar to the group I’m part of. It’s run by my dementia support worker we do the same meet once a fortnight. We always do something different & have a laugh as well as supporting each other through the good & bad times.

As a person living with dementia for about five years, I feel that I have been lucky in that I have joined a group of other people who are also ‘suffering’ from it. We meet fortnightly, when we talk about all sorts of things, sometimes related to dementia, sometimes not. In addition, there is a Women’s group, where we usually finish up putting the world to rights and having a good laugh.

My Mother has Dementia. She pays £600 per week to be in a Care Home. The Home do not answer my letters or emails asking how she is.

Hi Claire, thanks for your comment.
I'm not sure, but it sounds like you could be referring to our This is Me resource. It's available to download or order here: https://www.alzheimers.org.uk/get-support/publications-factsheets/this-…
Hope this is helpful, and don't hesitate to get back in touch.
Thanks,
--
Alzheimer's Society blog team

Hi Claire
I've only just seen your post so you may have now realised you can down load or purchase wallet/purse size cards/ID from the Alzheimer's society website. These are useful not just for the person living with dementia but also to show members of the public when interacting with them. This is the link:
https://www.alzheimers.org.uk/get-support/publications-and-factsheets/h…
These say 'I have memory loss' there are others which refer to Dementia