Support us
A momentous step forward for dementia in Wales
Blog

Welsh Government launched its brand new Dementia Action Plan. It's the result of years of campaigning to ensure people affected by dementia have their say.

This is a momentous step forward. It is the result of years of campaigning and hard work to ensure people affected by dementia in Wales have their say. 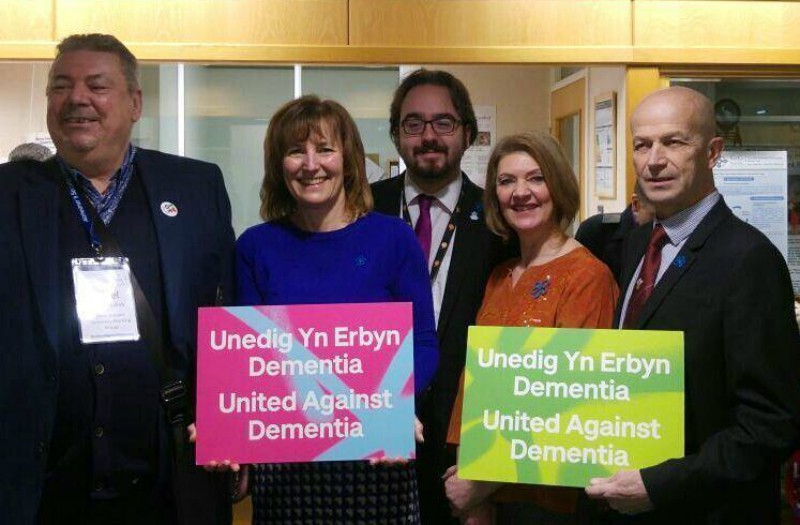 How was the Dementia Action Plan developed?

The Welsh Government is responsible for health, social care, transport, housing, and more. We needed them to take action to improve support for people with dementia.

In the run up to the 2016 Welsh Assembly elections, we launched our #45000reasons campaign. This called for a dedicated dementia action plan to support the 45,000 people in Wales living with dementia.

We managed to secure a commitment from every main political party on supporting people affected by dementia. After the election, the government announced it would begin developing a dedicated action plan.

Over 1,100 people shared their views with us.

We united against dementia with organisations from across the third sector. We also produced our own Alzheimer’s Society Cymru response, with contributions from people affected by dementia and our frontline staff.

What does it all mean?

The Action Plan is designed to improve support and services in Wales. It addresses some of the key aspirations people affected by dementia raised. This includes a key point of contact during their ‘journey’, and person-centred support for carers and family. It also includes access to flexible respite services.

The Action Plan is taking a rights-based approach to services. It includes the Dementia Statements, developed by people affected by dementia, which will underpin the implementation.

The Welsh Government will be investing £10 million annually to implement the strategy. They will focus on:

What will happen next?

Now, the real work begins. We must make sure Welsh Government, local health boards and councils implement the Action Plan properly. It must include the voices of people affected by dementia at every level.

We must seize this opportunity to make sure Welsh public services, at all levels, unite with people affected by dementia.

Wales
Back to top

It's good to see the impressive list of things the Welsh Government intends to focus on after the campaign from so many well meaning organisations in UK . Put in context the £10 million divided by the 45000 people living in Wales with Dementia works out at £222 each person ! Not very generous in my opinion.

The message I continue to get from our Governments is that you are on your own to cope as well as you can without their help. The NHS in England have conceded that Alzheimer's Disease is a "Primary Health Need". They will cover all the costs for eligible people who get accepted for Continuing Healthcare. Details on how to prepare for an Assessment are on my website https://continuinghealthcare.wordpress.com/

A great step forward with Wales leading the way,providing, of course, the politicians actually deliver. One aspect that doesn't appear to have been addressed,however, is the injustice of those who have to be self-funded in residential care. There should be a cap on the amount one has to spend from one's own assets, and the Senedd has to deliver on it's promise to raise the amount of assets one can keep to £50,000 before the next election, allowing some of one's assets to pass on to the next generation, some of whom will undoubtedly need care themselves in the future.