Real stories
Life with Ma: 'She left the tap running and the ceiling collapsed.'
Blog

Ma is the mother of Dilly’s husband, and was diagnosed with dementia in 2012. Ma agreed to let Dilly write about the family’s new life and experiences.

Ma is the mother of Dilly’s husband (Mr B), she was diagnosed with dementia in 2012. Ma agreed to let Dilly write about the family’s new life and experiences in the Life with Ma series. 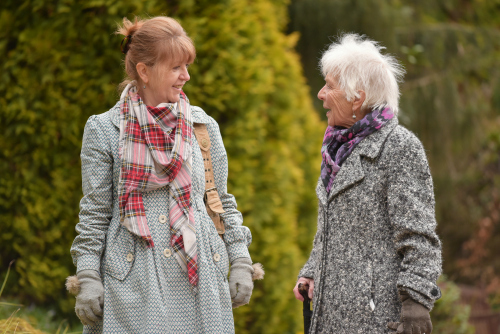 Ma had an eventful Christmas. Following a fun night out with her family up north, they returned to find she had left the tap running and the ceiling underneath had collapsed. The hallway now has Tudor-style beams.

As ever, Christmas brought its frustrations for Ma, not least that she had a birthday at the end of December, too. Cards that say ‘Don’t open until the 31st’ cannot be withheld for long, as she ‘can’t be doing’ with that – ‘Give me the envelope!’

My daughter sent a box of chocolates to Ma, and we received a photo of the box with only one or two remaining. All family members admitted to eating one each. Ma denied she’d had any despite being seen to eat five, the other 18 unaccounted for!

We rang Ma to wish her a happy birthday. She had been outside happily planting bulbs in the garden.

When Mr B mentioned he’d had a persistent cough for weeks, Ma advised him that he ‘would grow out of it’. When he protested that he was already 63, she roundly told him off. ‘I’m 92, so you’ve got a long way to go!’

Ma is coming down here for a few days soon with her granddaughter. It’s been a while since she visited and we hope she will be happy in her old room.

If she stays for a longer period, we’ll need to think about companionship while we are working.

Life with Ma also features in Living with dementia magazine, which you can subscribe to

Life with Ma
Back to top