In 2017, dementia was placed firmly on the agenda and we couldn’t have done it without your help. We look back at the year's dementia campaigns.

Rosie Leatherland, Public Affairs and Campaigning Officer, talks us through a year of campaigning for people affected by dementia. 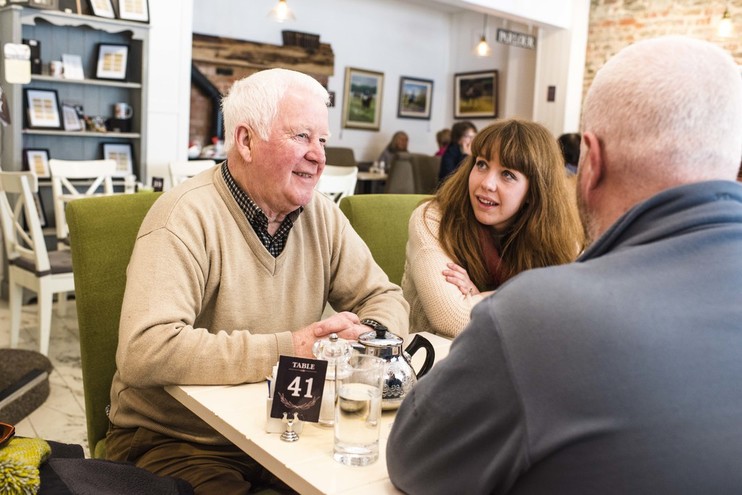 2017 was a year that dementia was placed firmly on the agenda and we couldn’t have done it without your help.

From dominating the snap election with the dementia tax debate to confirming Government commitment to consult on a long term social care solution; there has been plenty for us to campaign on.

So what have we achieved this year with the support of our fantastic campaigners? Here are just a few of the highlights.

The year in dementia campaigns

The year began with our refreshed dementia statements, first launched in 2010 to capture the aspirations of people affected by dementia.

Grounded in human rights law, the statements are the basis of a rallying call to improve the lives of those affected and to recognise that they shouldn’t be treated differently because of their diagnosis.

A key change to the revised statements was moving from ‘I’ to ‘We’, which represents the collective voice of people with dementia.

We also produced an ambitious and innovative piece of research, ‘Turning Up the Volume: unheard voices of dementia’. Working with pollsters Ipsos MORI, this project was the largest ever conversation with people affected by dementia to hear about their daily life. We also asked the general public about their beliefs and attitudes towards dementia. The ground breaking research represents our ambition to connect with as many people living with a diagnosis of dementia as possible.

In June of this year, the General Election took an unexpected turn when the Conservative Party announced their policies on social care in their manifesto. Dubbed the ‘dementia tax’, the policies shone a light on the catastrophic costs people with dementia and their families pay for their care.

We launched a petition to end the dementia tax, which over 68,000 of you signed. This led to meetings with the key Government Ministers leading on the social care reforms, as well as Jeremy Corbyn, leader of the Opposition.

We have been working with parties of all colours to ensure that the issues people with dementia experience when accessing and paying for care are at the centre of the debate on social care.

In autumn this year we took our campaigns on the road to Conservative and Labour Party Conferences.

We hosted an event at each conference highlighting the grave challenge that people with dementia currently face in just getting the basic support they need from a complex and disjointed health and care system. MPs from across the country attended both events, including Shadow Home Secretary, Diane Abbott and Secretary of State, Jeremy Hunt.

This December we launched an investigation into Delayed Transfers of Care.

Due to social care funding cuts, people needing support at home or a care home place are being left stranded in hospital.

As people with dementia are the predominant users of social care, it’s not surprising to hear they are greatly affected, but shockingly we found they are waiting in hospital for twice as long as someone without the condition. There’s still time to join our campaign which will run well into the New Year.

What a year it has been! Looking ahead, next year will also bring plenty of opportunity to campaign for change for people affected by dementia.

The UK Government’s consultation on social care for older people in the summer is a key moment for us to ensure people with dementia receive quality care at a fair price.

We will also be continuing to campaign in the many communities of people affected by dementia who are not gaining the support they need, purely down to where they choose to live.

Our Dementia Friendly Parliament project also continues, building on a successful 2017 in which we inducted all Permanent Secretaries of Government Departments and the Prime Minister herself, who we met with in her constituency early in December.

I visited the excellent @alzheimerssoc in my constituency this morning, meeting service users and their carers. I was pleased to become a #DementiaFriend, an initiative aiming to create a climate of kindness and understanding about dementia. pic.twitter.com/QoO52UlLbl

Thanks for uniting with us

Thank you for uniting with us over the past 12 months and making a real difference for people affected by dementia. We couldn’t do it without you.

Read more about our campaign to fix dementia care

Great that you are engaging with the higher echelons of society but do not forget the ordinary people who can easily be forgotten.

My Mother has to pay a fortune for her Care Home. I contacted my MP. Neville Pearson in Plymouth Devon

You have stated all the things you have done in 2017....but what has any of it meant for people living with dementia? Has is changed anything for ordinary people ..no . People are still diagnosed and left without support or information it's all very well talking to political parties but you need to actually get on the ground and support people which you don't seem to do unless someone else is funding it. The Alzheimer's society is supposed to be there to support people living with dementia but you seem to spend too much time talking and not enough doing. Where does all the money go people raise for you?

Well said and may a less rigid person centered approach be adopted in 2018 which engages with people where they are and bring some fun and sunshine to the difficult path experienced by both sufferers and their families.

I agree. My Mother has Dementia. She has to pay £600 per per week for here Care Home. She is very unhappy there. Neville Pearson Plymouth Devon

I totally agree with all that was said. When my husband was diagnosed back in 2013 lots of people got involved but nobody actually does anything to help. I think the carers of dementia patients need practical help more than anything.

Hi Susan, thank you for your comment. The work we have undertaken in 2017 has allowed us to best represent people with dementia through our revised dementia statements and largest ever consultation with people affected by dementia. This underpins the work that we do and the conversations we have with Government and others to ensure people with dementia always provide the backbone to our policies and influencing work.

Our campaigning throughout the General Election campaign and through Fix Dementia Care has got us round the table with the key decision makers on social care; an issue that disproportionately affects people with dementia, and any reforms to the system will need to consider people with dementia. That’s why it is crucial that we made noise and have their attention, to bring effective change to people with dementia and their carers.

As an organisation we work across service delivery, research and campaigning to deliver for people with dementia today and tomorrow. This blog is specifically about our campaigning work.

Your campaign work is great but it should be widened to include campaigning with the public that encourages support for locally run social activities so that donations do not get lost in the central pot.

We like many others did not get power of Attorney when we should have, now I am finding it hard and VERY EXPENSIVE, I would like it if you would lobby on behalf of those who need to get deputy power, to have help in place to assist them.

I totally agree with Rosie above!!!! She actually says just what i have been thinking, where is the support for people living with this dreadful disease? I support you whenever i can financially, only today did i receive another batch of prize draw tickets to buy on the very day the previous tickets i bought were due to be drawn!? My lical Authority reckon they care, there are things for carers who can manage to get to them but really nothing for the sufferers. Its marvellous to have the research but dont forget the sufferers and their carers! The kindness and the help i have found comes from volunteers, thank goodness!

It has certainly been quite a year! Great work.

I’m interested to know whether the Lib Dem’s were approached, and/or why you decided not to go to their conference.

Hi Jackie, thanks for your comment. As an organisation we typically attend the conferences of Government and Opposition due to resource/cost but we work with parties of all colours all year round to raise awareness of dementia in their policies and manifestos.