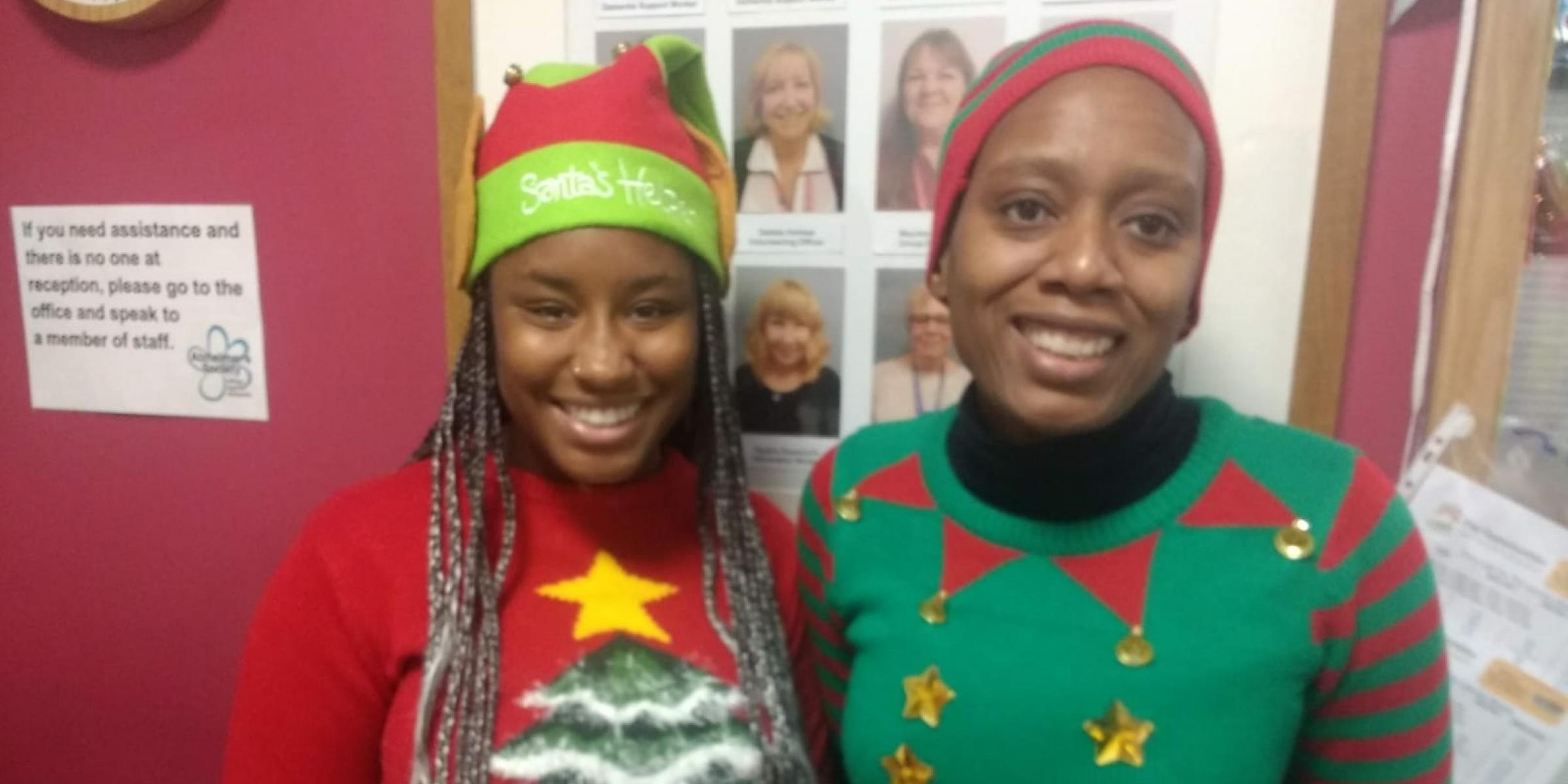 Soraya Bowen is a community fundraiser for Alzheimer’s Society, living in Luton. She spent most of her career working in incredibly diverse communities in London. Now working in Hertfordshire she sees that dealing with dementia might differ between races, but is still just as challenging.

My work connects me with all kinds of people and organisations.

Businesses, Rotary Clubs, schools, universities, and of course individual people who want to fundraise. My day can involve phoning supporters about their event, chasing income after the event or – to promote our mass participation events – taking to streets dressed as an elf!

The key thing is to find out what people’s motivation is, and start from there. Every story is unique – even mine.

For most of my career I’ve worked in the public health sector, in local communities all over London.

It was really interesting working on issues like heart health or epilepsy. I learned so much because I got to work with all sorts of different communities, like the south Asian community or the Haredi Jewish community. London is such a multicultural capital that it really helped me understand how to communicate and avoid assumptions and stereotypes. These were all individuals.

My first interaction with Alzheimer’s Society was when my Aunty Nivivne's husband, Steven, began to show signs of dementia. I knew a little bit about the science of dementia because I learned about the brain during my degree in Applied Biology.

At that time in Jamaica, where my Aunty and Uncle live, there wasn’t much support or information for people. So I used Alzheimer’s Society’s leaflets and information and sent them to my Aunty.

Things are better in Jamaica now, but it illustrates a cultural divide I have noticed.

We know that in general, Black people don’t show up at palliative care services as much as they statistically should. We know they present later than white British people at different health services.

There are a range of reasons for that. Sometimes our health services are not culturally appropriate for the Black community. When someone Black is sick, they can get dozens of relatives from all over coming to visit. A system that doesn’t cater for that might not appeal to my community.

I still feel there is a reluctance in the Black community to talk about dementia openly.

Twice, I have only found out about a friend’s parent or elder’s diagnosis after they have died. We need to get the Black community to really talk about dementia, as we now have a significantly sized elderly population.

‘Making a new language’: How music and culture can widen the conversation on dementia

Real stories
Ronald Amanze has often felt culturally misunderstood when receiving dementia support. Inspired by Black history and the reggae music that shaped his early years, Ronald explains how culture can be a special tool to get people talking about dementia.
3

There is a generational change I have noticed. A couple of generations ago, Black families would have lived very close to each other. But now, with house prices, and work, and my generation being a lot more confident, we are beginning to spread out. This can cause its own issues, as providing help can mean an hour’s car journey rather than a walk to the other end of the street.

I also notice that, in white British families I come across in fundraising work, there are challenges, which are just as difficult as ethnic minorities’ challenges – but they can differ.

In my culture, when someone dies, we have the idea of nine nights. It is also known as Dead Yard and is a tradition in the Caribbean. It is an extended wake that lasts for several days, with roots in African religious tradition. During this time, friends and family come together to the home of the deceased. The body is often laid out in the home, and for nine days and nights people come to pay their respects and celebrate the life of that person.

Growing up, I went to those traditional events. I saw the bodies. Death was not a stranger.

Some people find it harder than others to acknowledge that we are dealing with a life-limiting health condition. And that is increased because we live in a society where people are living longer.​

Part of the solution

During the coronavirus pandemic and the national lockdown, I think life has slowed down. And as a result, certain “side-lined” issues have been magnified. I think that applies to dementia, and to the Black Lives Matter movement.

We are more awake to what others in society are enduring, and how they are affected.

I think the whole issue of Equality, Diversity and Inclusion (EDI) should have a higher profile in the UK. It is part of a journey. We all need to play our part to make those experiences more relevant to our everyday existence and reflect on them.

I love a solution. I don’t want to be part of the problem.

Writing and sharing a story about how you or a loved one has been affected by dementia can offer some relief for both writer and reader. If you'd like to share your story, we'd love to hear from you.