Research
Seeing the potential – can our senses help us to detect dementia?
Blog

Gradual loss of hearing, sight or smell is a normal part of ageing. But Brooke Lumicisi asks whether a decline in our senses can help us detect dementia earlier?

Early detection of Alzheimer’s disease is key. Diagnosing the condition early allows us to better manage and slow down the progression of symptoms with dementia support and medication.

Several studies have shown that Alzheimer's disease begins to develop 10 or even 20 years before the onset of obvious symptoms. If we're able to find ways to diagnose Alzheimer's before these symptoms show, we could help delay the onset of the disease for longer.

Current methods of Alzheimer's diagnosis include brain scans or testing for signals related to the disease in spinal fluid. Often these techniques are inconvenient and invasive, and so researchers are working to improve the way we can detect and diagnose the disease.

Studies have looked at whether measuring changes in the senses such as sight, hearing and smell could be a used as a way to diagnose Alzheimer’s disease. If an accurate and reliable test could be developed, this would be a leap forward in identifying the people who are most at risk. They could then receive support and treatments as soon as possible. 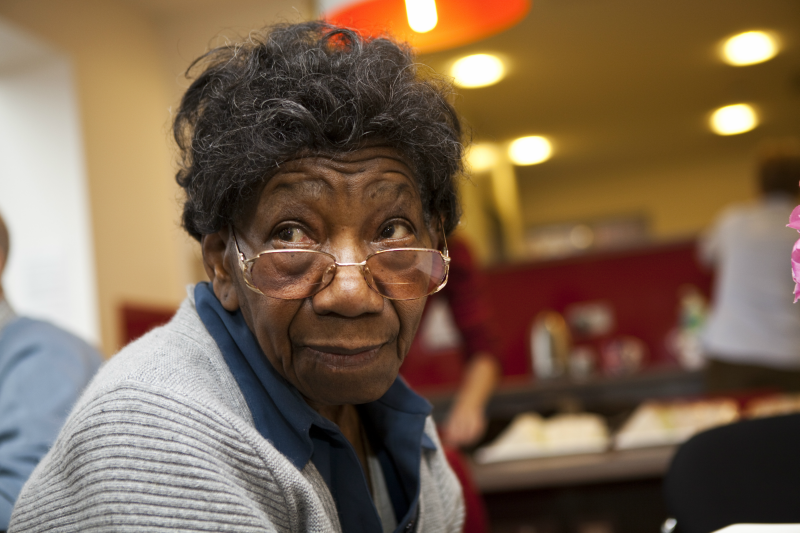 Could measuring changes in sight, hearing and smell be a used as a way to diagnose Alzheimer’s disease?

Having trouble recognising smells probably has the most promise when it comes to using senses to detect Alzheimer’s disease. This is because regions of the brain that process smell are some of the first to be affected by the disease.

People with Alzheimer’s disease have difficulties with the recognition and identification of odours, rather than being physically unable to smell. This suggests a problem in the brain as opposed to the nose, as the brain needs to correctly interpret the odours in order for us to recognise them.

When the connections between the regions that process these smell signals are disrupted, including those in the entorhinal cortex (called the olfactory regions) and the part that is responsible for memory (the hippocampus),  it prevents the flow of information that is essential to identify and memorise odours.

This suggests that performance on specific smell tests could reflect the disease process and be particularly sensitive to problems in the earliest stages of the disease.

Further research is needed to develop the appropriate tests for measuring this specific smell memory. However, initial research using 40 different easily identifiable smells, such as lemon and mint, has proved positive in accurately predicting disease onset in people with Alzheimer’s disease. 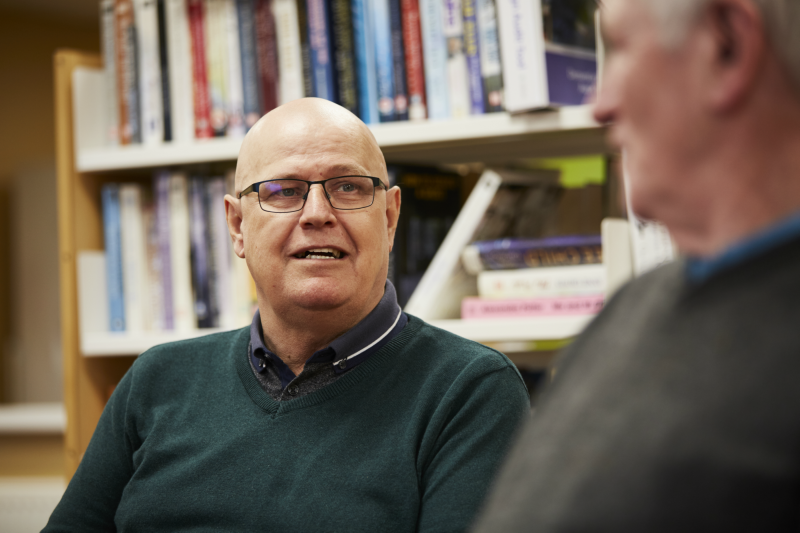 Problems with hearing have been shown to come before memory and thinking problems, but it is not clear if the hearing loss is an early sign of Alzheimer’s disease or a risk factor.

Some long-term studies and an analysis as part of a Lancet Commission have shown that people with mild to moderate hearing loss were more likely to experience memory and thinking problems. However, these studies haven’t been able to resolve the question of whether hearing loss is a symptom of Alzheimer’s disease or a potential cause.

The effort it takes to hear and understand things, even when you have mild hearing problems, is so great that it diverts brain resources away from the ability to process, respond and remember the information being heard. This brain resource is called cognitive load and may be one of the reasons that cognitive impairment is more pronounced in people with hearing loss.

Researchers also believe that consistently re-allocating cognitive load may result in the re-wiring of nearby brain areas, resulting in shrinkage of the brain in these parts. Similar to if you only use your left arm for everything, your right arm would eventually start to lose muscle mass due to under-use.

Hearing loss appears to be an important factor when it comes to understanding Alzheimer’s disease.  Evidence can’t yet tell us if hearing can be used as a way to accurately diagnose Alzheimer’s disease, but ongoing research will hopefully shed new light on the subject.

Several types of vision might be affected in people at risk of developing dementia. These include the ability to distinguish objects from the background and recognising features in complex objects, particularly faces.

Similar to the findings for hearing impairment, it is not clear whether poor vision could be used a way to detect Alzheimer’s disease early. However, it does appear that impaired vision may be linked to an increased risk of developing Alzheimer’s disease or speed up the process of cognitive decline.

Further research into the specific types of vision impairment experienced by people with Alzheimer’s in the early stages of the disease process is required.

You can read more about the link between eyes and dementia in our 'Are eye tests a window to the brain?' blog post.

Potential for the future

Altogether the evidence suggests that sensory decline in people at risk of Alzheimer’s disease, particularly before symptoms appear, is a promising area of research into better diagnosing the condition. However, it is also worth bearing in mind that ageing does affect our senses and having problems with hearing or smell does not necessarily indicate dementia.

As poor hearing and sight are linked to memory problems, there's also a strong case for making sure that people with sight and hearing impairment receive good quality treatment and support.

If you or a loved one does have problems with eyesight or hearing, please do visit your GP and eye and hearing specialists.

I know 2 people who lack the ability to recognise scents but show few if any signs of dementia.
As regards hearing, it is not that the person cannot hear but that they don't understand what has been said. E.g. My husband with dementia diagnosed in 2013, having 3 degrees, can only understand conversations if I couch the terms as if I were speaking to someone with a below average IQ. I used to teach' bottom division' maths and find I am using the same techniques in conversation.

Sorry, but it is difficult for me to say whether I have 'a good memory', since a judgement of that sort is surely as 'subjective' as anything could possibly be!

Interesting. I know that I have had a memory good enough to get exam passes, a degree and a higher degree, but I still believe my memory is not very good. I have known many people whose memory appears 'much better' than mine - i.e. bigger (in the sense of absorbing a lot of stuff quickly), faster (coming up with an answer while my memory is still poking about) and more reliable (mine has often gone for a walk round the houses of association).

I am certainly anxious about my memory now, whereas other people that I have known are not at all anxious. It is, for a start, a highly subjective matter. I have always had trouble learning and recalling lots of material that doesn't belong to some sort of visual, experiential or hands-on reference set. Lists of words in foreign languages, for example, I cannot do. I can much more easily learn things that have some physical or visual reference, such as components of an engineering mechanism, or things that can be related in my mind to a diagram or visual image. When there is no obvious 'natural frame' I have in the past often built some sort of artificial aide memoire - a set, picture, patchwork, diagram, series, list or whatever seems appropriate. So I will do somewhat better than I should at a memory test that allows me the time and materials (in particular, pencil and paper) tin order to devise and operate some kind of strategy.

Thinks - Memories must surely be 'referential' or 'relative' in some fundamental sense. Sets, frames, cascades, sequences, categories. If we don't know something we probably know how to know it. We know its category and therefore where to begin looking.

Oh dear, I am messing with things that you know much more about than I do... It's mainly because I now have Alzheimer's Disease, which has changed and is still changing things, but in many cases I can still work out some sort of 'category' system to get to the right address.

The trouble is that that more and bigger holes are appearing. Even if I think of a suitable bridge it may turn out not to reach the far side. This is certainly an unnerving moment. If my tactic is defeated in this way it creates a sense of panic in which there are no references at all, no possibilities, and even the path back to my starting point may vanish. What is it that I want to know? Why do I want to know it? Not only the particular word, name, or fact has disappeared, but its connections to solid ground. I have to rush back across the now-wobbly bridge to the start, which is now on the far side of the hole, and too far away to see clearly - what on earth were we talking about? The hole may be too wide to construct a bridge. Is that it? I don't know. I am lost.

Sometimes I cannot recall things that I certainly ought to know, such as the name of a friend. These holes appear to be random as to subject and context, but perhaps not to age - older memories are possibly less likely to vanish. Particular and conscious habits of thought seem a good idea for those of us in Alzheimer-land. I wonder whether one's powers of recall may improve if familiar subject areas are always used as an aide memoire? My partner can identify by name and classification the great majority of UK flora, whereas I struggle beyond daffodils. However, I know something of the sciences and the practicalities of engineering. Can that help? Perhaps if I associate Mrs Galsworthy with some imaginary aeroplane - the Gloster Galsworthy - I will recall her in future? I reckon I would.

I wish you the best of luck in your researches!

Martin Corrick
PS I have already participated in a couple of memory studies, and am happy to help in any other research activities relating to Alzheimer's.

We just wanted to get in touch to say that we really appreciate your comments on our blog, and we wondered if you wanted to get more involved with Alzheimer’s Society?

It would be amazing if you wanted to share your experiences to help us raise awareness of dementia and the support and services that we can offer. By raising awareness of what we do, stories like yours can change attitudes, challenge stigma and help as many people as possible - patients, carers, families and communities – and inspire our supporters to fundraise, volunteer and campaign for us.

If you’d be interested or would like to find out more about how you can get involved, could you email our case studies officer to set up a chat? He’s at [email protected]