Real stories
Life during lockdown: ‘Grandad doesn’t understand why we can't come and see him.’
Blog

Ruby’s grandad, George, was diagnosed with mixed dementia two years ago. Ruby writes about her close relationship with her grandparents, how the lockdown has affected them, and about how Ruby copes with her emotions.

I’ve always been really close to my grandparents. We live about ten minutes away from their house so we would see them regularly.

Growing up, my dad worked in London (about an hour’s drive away), so my sister and I would be with my grandparents every day after school and during the school holidays.

Before coronavirus, my dad would drive my nanna to do their shopping twice a week. My aunt would go on a Thursday afternoon to sit with my grandad whilst my nanna went out, and I would visit at the weekends.

But since the lockdown, none of this has been possible. This has been particularly hard on Nanna and Grandad.

What is mixed dementia? 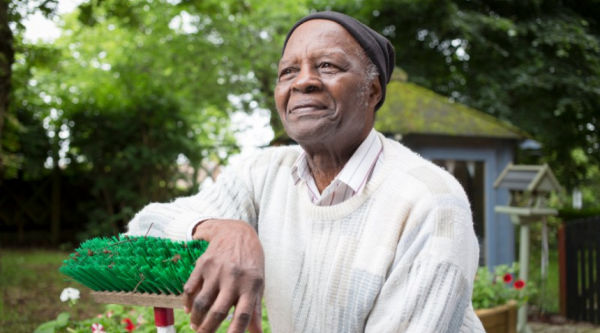 Advice
‘Mixed dementia’ is a condition in which a person has more than one type of dementia. Alzheimer’s disease and vascular dementia is the most common type.
61

My grandad, George, was diagnosed with mixed dementia two years ago, aged 91.

We’d noticed symptoms of dementia for about two years prior to his diagnosis. My grandad is very stubborn and it was difficult to get him to the doctors to get him a referral to have an assessment.

When I was younger, Grandad would tell me stories about growing up in Hackney during the 1930s and 1940s. His family were very poor but unaware because everyone around him was in the same situation.

'Grandad used to speak about what a treat it was when his mother would come home with jellied eels for tea.'

Everyone in my family is repulsed by jellied eels, but to Grandad there is nothing better.

He would repeat this story several times over and I would listen enraptured every time, with an ache in my stomach as I knew one day this memory would be gone.

I wonder if he will be transported back to his childhood in Hackney. I hope that even if he can’t remember those times anymore, he is filled with the same happiness he would have been then. I would buy him all the jellied eels in the world if it gives him that feeling.

The impact of dementia

But over the last two years, my kind, funny, spectacularly stubborn grandad has slowly faded away, as mixed dementia spreads through his brain, erasing his memories. He is frail and has little idea of what is going on around him.

'My nanna is fighting every day, battling with someone whose actions and questions are no longer rational or logical.'

I’ve never felt so hopeless. Most nights my thoughts spiral, questioning when I first noticed he was forgetting things; why didn’t I spend that extra five minutes sitting with him; what was so important that I couldn’t go and see my grandparents?

I feel weighed down by guilt – guilt that I didn’t enjoy all the times I could have with my grandparents before my grandad became unwell, and guilt that I can’t do more to help.

I’m also grieving. I’m mourning someone who is physically here but is mentally fading from us. I have always been very close to my grandparents, my happiest times spent in their company. I feel grief for what we once had and who we all once were. 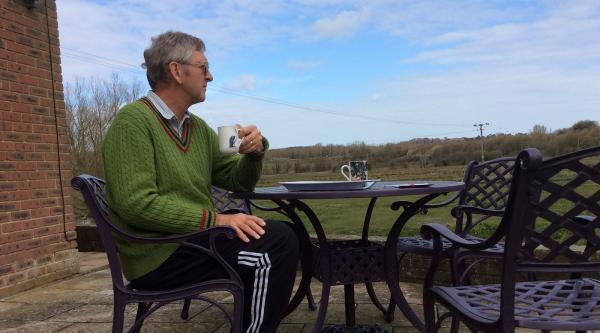 Real stories
Coronavirus has brought new challenges for people living with dementia, such as Keith Oliver, who was diagnosed with Alzheimer's disease in 2010. Find out how Keith and his wife Rosemary have been staying active while self-isolating.
13

My nanna is finding the lockdown difficult. My grandad doesn’t understand what’s going on and doesn't understand why we can’t come and see him anymore.

For my nanna, going shopping and going out dancing on a Thursday afternoon were a break and a time where she could de-stress and see her friends. But now she’s at home all the time and it can be hard for her.

Grandad’s condition has declined during the lockdown.

We regularly Skype as Nanna is very tech-savvy and we have a weekly family quiz. We also set her up a Netflix account which she likes, and bought her some new books to read.

The doctor has referred Grandad to an intermediate care team and they’ve assessed him. Sadly, due to the virus, all the things that they want to do to help him and my nanna can't be done right now.

They’ve told my nanna that a day programme, respite care and three hours of a carer coming to give her a break won't be able to happen until the 1 July.

We are so grateful for any support that can be offered but it’s incredibly difficult for her and there are days that can be very challenging with my grandad.

Writing my way through

On the nights I find my thoughts spiralling, it helps me to write my feelings down.

'Putting pen to paper helps me to understand exactly what I’m feeling.'

Having a loved one with dementia can feel so lonely and scary sometimes, but writing can act as a release. I would encourage anyone who is struggling to try and write what’s on their minds.

I’ve written a poem for my grandad, called ‘For George’. I wanted to express how he is more than just one person with dementia; he is a grandad, a dad, a husband, a son, a brother. He is George and he has lived a life. I hope you enjoy it.

I am your sister or your daughter, you can’t remember which
But then I call you Grandad and suddenly you switch
My heart leaps- you’ve heard my silent plea

You’ve recognised it’s me
I know you’ve found me somewhere in your mind
And though you cannot place me, the feelings there are kind

Then you are silent, even those words were a strain
So as I sit and watch you, I hope you’re not in pain

Poems and Poetry, Relationships and Family, Mixed dementia
Back to top

So lovely Ruby .My partner is younger 77 and is still bright as a button and very stubborn and strong .He was diagnosed with mixed dementia 2 years ago and I am so surprised how well he is doing. Forgets names of people and things but remembers tel nos bank card nos but not alwayhis address He can still go shopping on his scooter and get home safely .Not sure if this is due to early detection and the medication he is on so fingers x there will be a breakthrough from our generation for future generations Loads of love to you and your family Sandra

I feel your mental anguish. Muy mum is 98 and has vascular dementia. At times she thinks I'm her late husband, not her son, and thinks there's another unrelated man in her house. I She cannot understand why relatives, apart from myself, are not coming to see her and rings me at all times of the day and night. What can I do?

Thanks for your comment - and really sorry to hear that your mum is finding the current situation confusing.

This may be more general than what you need, so please know that you can always call our Dementia Connect support line on 0333 150 3456 for information, advice and support more specific to your situation. More information about the support line (including opening hours) available here: https://www.alzheimers.org.uk/get-support/national-dementia-helpline

Lovely story and so real and true💓. My dad is very quiet not much to say, but loves listening to music and sometimes he will speak of a memory of years ago before my time! I'm so happy to hear him talk and love any response I can get from him! Stay strong !🤗💓

Ruby I felt every word you said demension is a VERY cruel illness the patient copes but loved ones find ria it so difficult to cope. Treasure the wonderful memories you have

I lost my mum to this cruel disease earlier this year but in fact I lost her a while ago. I went from being her daughter to her believing I was her sister.
Last Christmas Day she called me Sue for the first time in a year.

Ruby your writing and your poem is so touching , honest and real. Thank you Sue xx

Ruby what a beautiful piece made me cry. So proud of you xx

This story if all too real for me. My Grandad lived with dementia for a few years but after Christmas we saw a rapid decline to the point where he could barely put together a sentence. My poor Nan was so sad and really struggled with taking care of him, even with the help of carers. He passed away two weeks ago on Monday. But you're right, you definitely grieve way before the end really comes. Best of luck to your family💙

What an amazing tribute to such a special Grandad. Xx