Information
Being bold for women - not giving up on dementia
Blog

On International Women's Day 2017, Kate Swaffer writes a guest post for Alzheimer's Society, calling women to be bold for change.

Kate Swaffer is an advocate, author and speaker on dementia. Chair, CEO and Co-founder of Dementia Alliance International and a Steering Committee member of the Global Alzheimer’s & Dementia Action Alliance, Kate is also 2017 SA Australian of the Year.

Kate was diagnosed with younger onset dementia in 2008, at the age of 49. This is an extract from Kate's full blog post on the Global Alzheimer's & Dementia Action Alliance website.

This International Women’s Day, women the world over are being asked to #BeBoldForChange for a more gender inclusive world. I’m going one bold step further, advocating for a gender and dementia inclusive world. 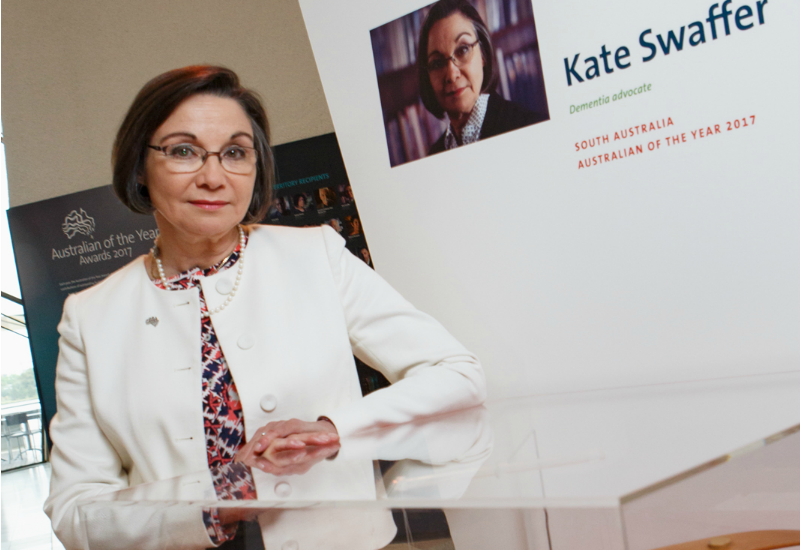 You might not link the words dementia and gender. You wouldn’t be alone; of the 29 countries with a national plan to tackle dementia, only 12 acknowledge what it really means for women. This is despite dementia being one of  the world’s top ten causes of death for women according to the World Health Organisation, and the biggest cause of death for women in the UK.

As a woman living with dementia and a past care partner and nurse of people with dementia, I write and read back these words with unease. The point of revealing the impact of dementia on women worldwide and the failure of governments to adequately respond is not to fear monger - it’s to provoke change. We desperately need a greater global understanding of what it means to be a woman affected by dementia.

I can talk about my perspective as a woman with young onset dementia, and I am lucky to have this platform, but each person’s experience of dementia is different. We are regularly defined by the symptoms of our disease—forgetful, confused, aggressive, odd behaviour, absconders, mute or refusing to communicate—rather than the people we still are—mothers, lovers, daughters, wives, employees or employers, grandmothers, aunties, friends.

For me personally, living with dementia some days is terrifying – it’s difficult and it is sad.

Conversely, there are days where I see living with dementia as one of my greatest gifts in life. Being told I have a terminal condition, and could potentially lose my cognitive capacity and most of the memories that define me has actually given me a clarity in life that I didn't have before.  But it hasn’t been easy for me, nor is it for the millions of other women that live with dementia, are carers for someone living with a dementia or that make up most of the undervalued and underpaid care workforce (where it exists) worldwide.

I recently joined a panel of leading women speaking out to tackle the global challenge of dementia, at a  London event organised by the Global Alzheimer’s & Dementia Action Alliance (GADAA). GADAA is a network of international civil society organisations coordinated by Alzheimer's Society, Alzheimer's Disease International, Age International and Dementia Alliance International. Today, GADAA launches a report that reveals dementia is a global women’s health, social care and rights issue that can no longer be ignored. The GADAA report is revealing not just in its findings of discrimination faced by women affected by dementia worldwide, but in the lack of research and policies to address the issue.

Yet there is hope. In May, the World Health Assembly will decide on the adoption of a ground breaking Global Action Plan on Dementia. The plan makes recommendations, which for the first time include rehabilitation and a gender sensitive approach to support people with dementia. We must urge governments the world over to back this plan, for the sake of everyone affected by dementia.

It is only by talking about dementia and facing the global challenge head on, that we will address the many misperceptions and myths about the disease, or else the stigma, discrimination and isolation women affected by dementia face will almost certainly continue.

For International Women’s Day 2017 #BeBoldForChange and share GADAA’s report 'Women & Dementia: A Global Challenge' to spread the word—dementia is a global women’s challenge that can no longer be ignored.

For International Women’s Day 2017 #BeBoldForChange and share GADAA’s report 'Women & Dementia: A Global Challenge' to spread the word—dementia is a global women’s challenge that can no longer be ignored.

Gender, Young-onset dementia
Back to top

Kate Swaffer is a truly inspiring person, and her blog post is wonderfully helpful to me!

My own diagnosis, about six months ago, resulted in my being immediately sent on an 8-week course with my partner, in a group of patients who were almost all far worse off than I.

In emphasising the awfulness of the late stages of dementia, this course simply upset us, and made me feel very depressed indeed. No distinctions were made between the various stages of dementia. Several of our 'patient' group were much too ill to do anything but doze, yet half of us were still pretty capable. Nothing is achieved by such a grouping, except making most of us feel very gloomy!

I retreated into myself after that course, but I am now realising that I am still capable of many things, despite being forgetful and not as well co-ordinated as I was.

I have now resolved to approach my local medical and charitable bodies to propose a much more upbeat programme for dementia patients, including measures to keep us active and reduce our rate of decline as much as possible. Dammit, I taught in colleges and universities for many years, and I know how to plan courses and learning activities!

It is great to see the women being so strong and fight out the Alzheimer's disease.