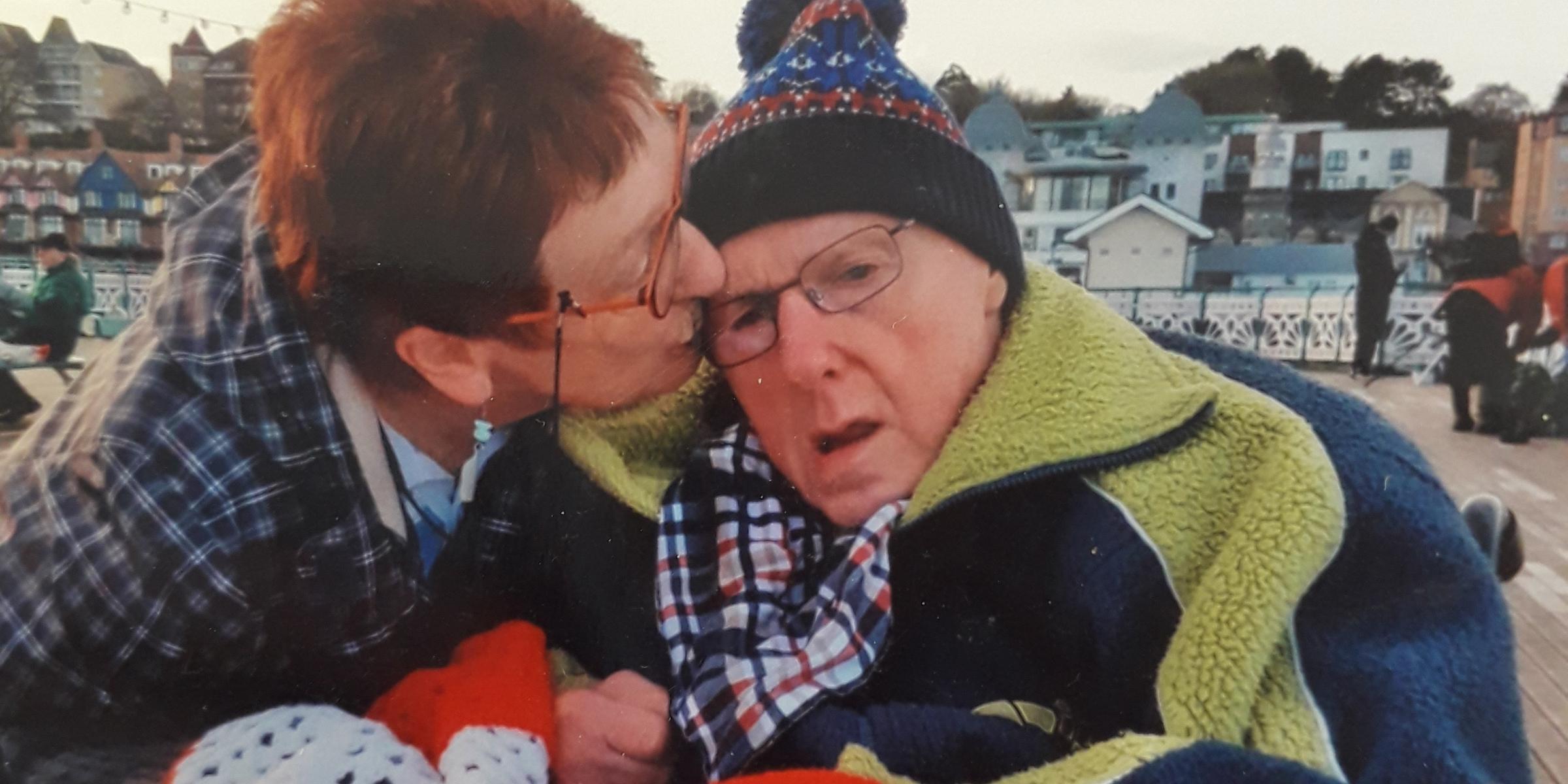 Real stories
Anne’s story: ‘Dementia has taken its toll, but I’m grateful for our final month together’
Blog

As coronavirus spread across the UK in February, Anne Davies was given the option to stay with her husband Allen in the care home where he lived. Knowing she wouldn’t be able to visit him otherwise, Anne moved in to be with Allen in what turned out to be his final weeks.

My husband Allen was diagnosed with mixed dementia aged 59, and lived with it for 16 years.

Although I’ve worked in nursing for most of my life, I knew relatively little about the dementia journey. At times it’s been exhausting, both physically and emotionally.

Dementia had an impact on Allen’s speech and language. So for the majority of this time we’ve had little normal communication. It’s often been a process of elimination trying to work out what he wanted, or what was making him uncomfortable. This could be frustrating for us both.

Before dementia, Allen was clever and had a brilliant, dry sense of humour. He could be quiet and shy – lacking in confidence a bit – but he was a lovely man.

We met at a dance hall, and I found out years later that Allen had told his family that he “had met the girl I’m going to marry”.

That meant a lot to me in later years.  Allen was working in the merchant navy at the time, which took him all over the world. But it meant that at the beginning of our relationship, we only saw each other once every six months.

He gave up that life so we could be married in 1972. After that, he worked as a fitter and turner, fixing ship engines. I remember him being covered in oil.

We settled in a house in Cardiff, where we stayed for 40 years with our daughter, Elizabeth Nina. She is the apple of Allen’s eye, and vice-versa.

The first change Allen noticed was in his speech – he started slurring his words while chatting to a friend at a local shopping centre. He was referred to a memory clinic, and a diagnosis followed soon after.

At the time, Allen was quite philosophical and pragmatic about the whole thing. But as his dementia got worse, it took a toll on all of us.

Over the years his behaviour became more challenging. He would become frustrated and aggressive when he had difficulty communicating. I needed support, but skill levels around dementia care varied greatly.

We had an advocate from Alzheimer’s Society called Leah and some mental health advocates who were brilliant. Between them, they made the health authorities take away the sedatives they were using to control Allen. This gave him a better quality of life.

They also helped us secure Continuing Healthcare (CHC) funding – which was no easy feat! I was constantly appealing the decisions of the CHC.

Tips on preparing your case for NHS continuing healthcare

Our tips are based on the experience of members of Alzheimer's Society NHS Continuing Healthcare Volunteer Group who have been successful in getting NHS continuing healthcare for people with dementia.

We did eventually get funding for the care Allen needed, but the battle left me utterly exhausted.

I used all the skills I had gained as a nurse to look after Allen at home. I learned to decipher certain sounds that he would make to signal what he wanted. He also had difficulties with swallowing and contracted pneumonia five times.

With support, I was able to keep him at home for a long time. But eventually he needed professional care.

I am so grateful to the nursing home in Cardiff for giving me the choice in early February to come and stay with Allen. They warned that if I didn’t come, I wouldn’t be able to visit him at all.

Before Christmas, my daughter had arranged a holiday to Lanzarote for us. But given the choice, I knew I couldn’t go. I think I knew he was dying, and I wanted to make sure he was kept safe.

Despite everything, the last month staying with Allen was something special.

At the start of the coronavirus lockdown, I probably had it easier than people inside care homes now. The staff and floor managers were helpful, kind and empathetic. They allowed me to give Allen care. I could bathe him and was allowed in the kitchen with an apron.

Allen hadn’t really eaten in a month before he died. He had lost a lot of weight. The thickened drinks I was giving to him had begun to form a crust on his larynx and pharynx. Palliative care gave us support

Saying goodbye during a pandemic

I had already made plans for Allen’s funeral two years ago. But with coronavirus, it didn’t happen as I had envisaged.

Coronavirus and funerals: How to adapt a service and support people affected by dementia 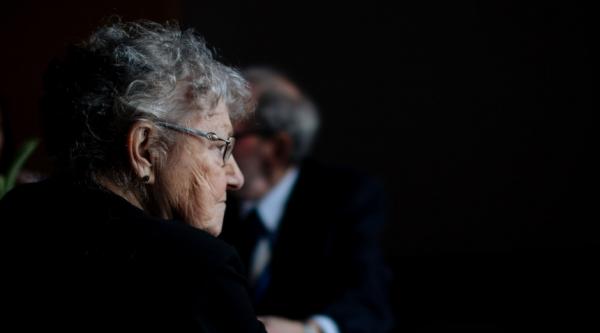 Information
A funeral can be a confusing experience for someone with dementia. Social distancing and other safety measures during the COVID-19 pandemic may add to this. Learn how you can adapt to funeral restrictions and ways to support someone with dementia in attendance.
1

The service was supposed to be in St Peter’s church, where we married almost 50 years ago. But that wasn’t possible. Nor was the limousine we had hoped for.

There’s still a lot I look upon fondly. There were seven people present. The roads were empty. The Order of Service was printed at home, and the coffin was draped in the Welsh flag and family flowers. We began with the Welsh National Anthem (Allen was a big Welsh rugby fan). Our daughter Elizabeth wrote and bravely read a lovely poem. Finally, as Allen was such a big Liverpool football fan, we all sang “You’ll never walk alone”.

None of this was how I had long imagined it. There wasn’t time to see the grave being filled with the flowers on top.

I tried to go and see the next day, and the day after. But I wasn’t allowed in because of coronavirus.

A final thank you

At home in Cardiff, the mantlepiece has been covered with cards from family and friends.

I was finally able to visit the grave just over two weeks after the funeral. I saw the flowers that had been laid, and placed some new ones down myself.

On behalf of Allen, myself and Elizabeth – as well as the many, many people who helped us care for Allen over these 16 years – I want to say thank you.

Allen would be genuinely grateful. I was very, very lucky to have married such a lovely man.

If you want to share your story about how you've been coping through coronavirus and lockdown, we'd love to hear from you.

Care homes, End of Life
Back to top

Ann, so sorry to hear about Alan and your long journey together with Alzheimer’s, much love to you and Elizabeth. June Dimond 😘

Having lost my wife in October last year and having had the chance to fulfill our families wishes in relation to her funeral, I cannot imagine how hard it was for you to cope with the pandemic restrictions. Best wishes to you all.

Sending you and Elizabeth love and prayers for strength and peace.

Much love to you ..I admire you so much...our life is following in your footsteps like you I have nursed all my life..met amazing people including my husband he was a gentle gentleman with a qick sense of humour.. he was loved in his work with his friends he is loved by our lovely family both young and older members we have been so lucky to have good true friends and an amazing family.. unfortunatley.. Eddie doesnt recall all of those wonderful times...we were looking forward to our retirement as Eddie had worked away from home most of our married life ...this was our time..we now have a wonderful grandson and Eddie adores him..I have to keep telling myself its not just our lives this horrendous illness has affected but everyone that knows us..we are just on the first step to getting social care..I know I will have to be strong to hand Eddie over to them a little step at a time..I pray they will look after him well and thank God that I can still have him at home..the stress is immense..the frustration unbearable at times ...a good day hard to find...especially in this strange scary life we are living..when we need the hugs to cope..when I read your story I know I am still very lucky to have Eddie..at home..take care.. I wish you a happy place now in your life where you can reflect on those happy times ..forget the sad days and nights and hope the tears you shed in the future are happy tears..Godbless you and your family xx

My sympathy to you and your family .We must all play a part however small to raise awareness and funds for help and support to those who are in the same situation you were.It is a long and bumpy road along the way.

What a lovely gesture to share your sad but heart warming story with us all. Many people reading this will be worried about what the future will bring, but even more so at the moment . Thank you for sharing this story with us. I hope you are well with the love of your family and your memories.

This is absolutely beautiful and so touching. It moved me to tears. Ann is an inspiration and highlights so powerfully the difficulties faced yet the strongest thing that comes across is love. The photos are also so wonderful.