Black Mirror is a television show written by Charlie Brooker that explores the darker aspects of modern life. In the show’s recent offerings from the third series, released on Netflix on 21 October, dementia was a prominent theme tackled in Playtest and again briefly in San Junipero.

Be warned, discussion around the plots lie ahead, if you are yet to watch the new series then consider revisiting this blog after you have done so.

How dementia is explored in Black Mirror

Brooker’s idea in Playtest is to pose the question ‘what do you fear the most?’ and answer this by demonstrating that everyone has a different set of fears completely tailored to their person.  It transpires that the protagonist, Cooper, has a big fear of developing dementia as his father developed early-onset Alzheimer’s disease and died with the condition.

The episode’s plot bears reference to the past and future of video games by merging horror classics with the infinite possibilities of technology breaking into the commercial market. Cooper is a charismatic American on a gap-year style tour of Europe, who winds up short of cash in England and signs up to trial a revolutionary video game designed around a haunted house. The game taps into players’ fears and decorates a virtual landscape that gradually builds the intensity of fear inducing events.  Cooper projects his fears of developing dementia onto his mother and himself as he finds terror in the loss of identity and self that can occur with some end-stage dementia diseases. 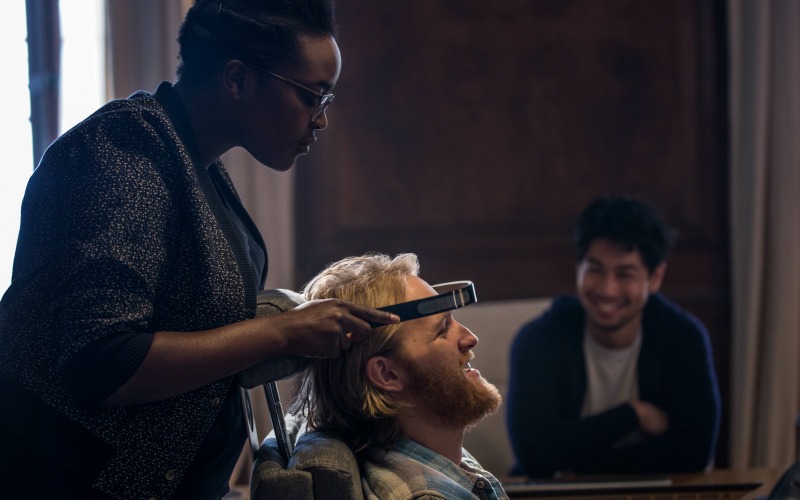 Dementia is referenced again in San Junipero, which is set in a future where dying people are able to relive their youth. They can choose a year to visit for a limited length of time per week and live as their younger selves in fictional settings. It is explained by character Kelly that this ‘immersive nostalgia’ was originally created to help people living with Alzheimer’s disease.

Dementia can be a frightful prospect to face and this can be especially apparent when people have first-hand experience of the disease through friends, family or colleagues. Poor portrayals of dementia in fiction often use the disease as a convenient plot device to advance a story with little exploration but the depth of Black Mirror’s writing shines through in Playtest due to the examination of different aspects of the disease. Early-onset Alzheimer’s, the type of disease referenced in Playtest, can occur through gene-mutations and crop up in family clusters. It’s important to note though that of people with early-onset Alzheimer’s, an already uncommon form of dementia, only one in 10 has a strong pattern of family inheritance.

With dementia being written into various other TV shows and featured in documentaries, such as ITV’s Emmerdale and the BBC’s Panorama , dementia awareness continues to rise.

Black Mirror loves to start a conversation: why not make your next one about dementia in the comments box below?

Looking for information, support or advice about dementia?